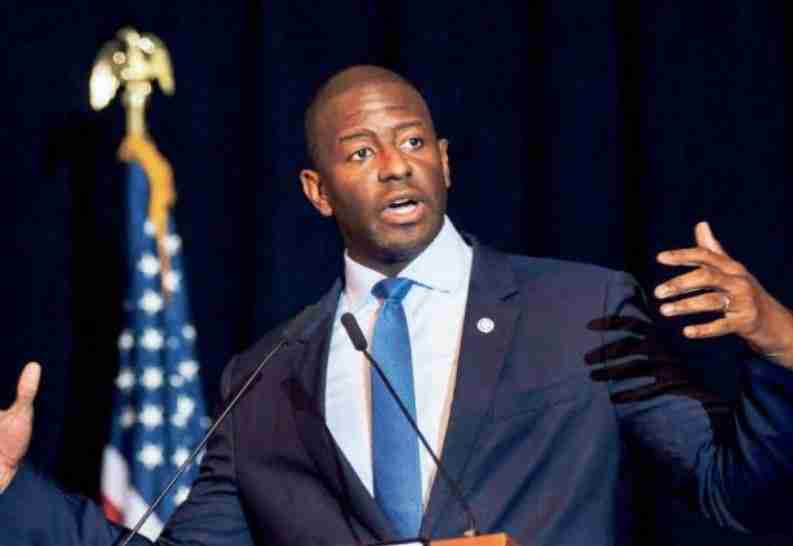 CANDIDATE FOR GOVERNOR: Andrew Gillum, current Mayor of Tallahassee and candidate for Florida’s Governor, presents his platform at the 17th Annual William M. Holland Scholarship Luncheon sponsored by the F. Malcolm Cunningham, Sr. Bar Association on February 23 at the Kravis Center for the Performing Arts.

WEST PALM BEACH, Fla. – Andrew Gillum doesn’t believe you have to be from a rich or famous family in order to be Governor of the state of Florida. In fact, he believes you could come from a family of dedicated, hard working people, where life hasn’t always been perfect.

He uses himself as an example: his mom was a school bus driver, his father a construction worker who sometimes made ends meet by selling fruits, vegetables and flowers on the street corner. And several of Gillum’s siblings have had brushes with the law. But through it all, they made it and he is now in the race to lead the state of Florida as its governor!

It’s a testament to the strength and belief of his mother and father. “My parents are the hardest working people I’ve known,” he said of his parents who are supportive of all their seven children. Gillum, who was born in Miami in Richmond Heights, said he now understands why his grandmother would anoint his forehead with oil in the shape of a cross before he headed out the door when he was young. It was his covering because life would bring its fair share of challenges.

But surely he’s made the family proud, as he’s already made history by becoming the youngest member ever elected to the Tallahassee City Commission at the tender age of 23. He then rose to become Tallahassee’s current mayor. Now, the Florida A & M University alum is poised to become the first ever African American governor of the state of Florida. He says the people can count on him to represent all of the people regardless of their ethnic or economic background.

“I’m not a lawyer,” he told a sold out audience at the 17th Annual William M. Holland Scholarship Luncheon sponsored by the F. Malcolm Cunningham, Sr. Bar Association on February 23. “But I know what fairness looks like. I know what justice looks like,” he said to the bar association group, which mainly consists of black lawyers. “It’s also important that we have judges and jurists that represent the community it serves. The worst thing we can do is put someone on the bench who is biased.”

Gillum touched on that and a variety of issues facing Floridians right now. Off the bat he addressed the mass shooting which took place at Marjory Stoneman Douglas High School in Parkland on Valentine’s Day which left 17 dead –mostly students. “I’ve been in Parkland to help prevent the senseless violence that occurred there. Those young voices that we’ve seen are the best advocates we have,” he said praising the students who’ve been speaking out on various newscasts denouncing lawmakers’ inaction against school shootings. “I just knew that seeing the sight of those little bodies in Newtown (Sandy Hook Elementary school massacre) would have been enough to take action. But those babies in Newtown couldn’t speak for themselves —but these young people in Parkland have really been saying something!”

“My battle with the gun lobby is real,” he added.

He also hailed the need to restore the rights of felons in the state. ” We have an opportunity in November (gubernatorial election) to automatically restore their rights,” he said. And he is against a change in the Department of Corrections that would cut back on visitation to inmates in the state, which is currently every week but would be cut back to only twice monthly. “It’s important that we keep that change from taking place. That interaction with the inmate’s family is very important,” he pointed out, especially for children going to visit a parent that’s incarcerated. “They need that parental connection more than anything. We cannot cut back on that.”

“We still have work to do in Florida, and you have a partner in me!” he told the audience. “We are stronger when we come together, so I hope you all will help me bring this home in November.”

Gillum faces a primary election for Governor on August 28, 2018 and should he emerge as the Democratic nominee from that election, he’ll face the Republican candidate in the general election on November 6, 2018.

After the luncheon the bar association hosted a post event reception for Gillum.

Nicholas Johnson, President of the Cunningham Bar Association, says he was pleased with the luncheon because the proceeds for scholarships exceeded their expectations. “Our Holland Luncheon was sold out, which allowed us to present six 3rd year law students with bar exam preparation scholarships each worth $1500.” Johnson also says Gillum’s speech had a major impact. “Our Keynote Speaker both inspired and deeply moved the audience, by sharing his personal life story as a child growing up in Richmond Heights, to Mayor of Tallahassee,” Johnson said in a statement.

Note: To hear Gillum’s views on whether teachers should be armed in the classroom, and to hear his views on whether Donald J. Trump is fit to be president, plus more pertinent issues, please visit the South Florida Times website (sfltimes.com) and view the videotaped interview with Gillum and reporter, Daphne L. Taylor.

Next post Gun violence is an American societal constant