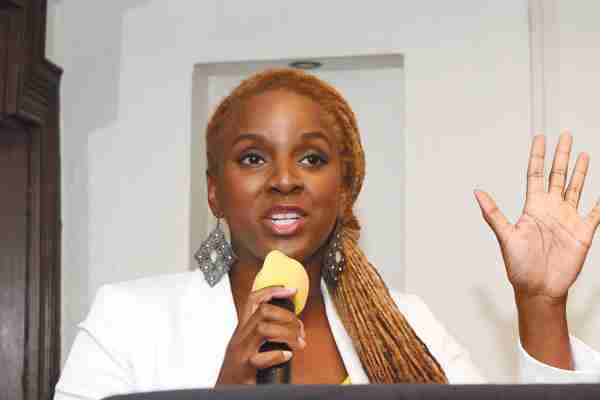 PEMBROKE PINES — Imagine wanting to make a show so badly that you set the timer on a video camera on a tripod, runback to a chair and sit in front of the camera, compose yourself and then read the news.

That’s what Calibe Thompson did to start The Caribbean Diaspora Weekly, a hybrid of lifestyle and public affairs television show.

She laughs about it now that the show has completed its first season, and is broadcasting on cable in more than 20 Caribbean countries and nine North American regions via Caribvision and One Caribbean television networks.

Photos courtesy of David I. Muir

Broadcasting since April, the show will debut on WSFL-TV, Miami-Fort Lauderdale’s CW affiliate Sunday, Oct. 5 at 11:30 a.m. through December.

Thompson readied about100 people earlier this month, at L’Fontana Restaurant & Lounge in the Grand Palms Resort in Pembroke Pines, to expect the show in South Florida and asked for their support – via money and spreading the word.

She launched a crowdfunding effort on the website Indiegogo to help fund the show’s addition to South Florida’s TV lineup. So far the campaign is slow, collecting only $300 of its $25,000 goal. 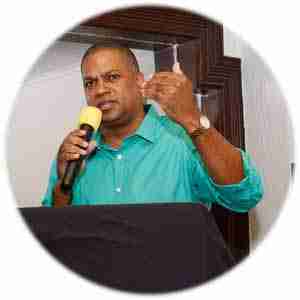 “We’re shooting for $25,000 in total which will cover the cost of air time and some of the hard costs like tapes and shipping,” said Thompson. “TV in South Florida apparently doesn’t broadcast shows that they haven’t commissioned so until we prove that we can engage an audience we have to pay retail for the air time. Also, sadly, although South Florida is among the top four largest Caribbean Diaspora regions in the world, we are unrepresented on South Florida television because we aren’t necessarily taken seriously as a group. This effort is meant to help change that.”

A SFL-TV official, who called the program quality, said the show is ready to launch in the fourth quarter.

The Caribbean Diaspora Weekly is produced by the joint effort of South Florida Caribbean media houses Caribcast, Jamaicans.com and Blondie Ras Productions. Caribcast allows the show to be seen on multiple devices and apps anywhere in the world via the internet and on a network of TV screens installed in several popular Caribbean restaurants in South Florida.

“The Caribbean Diaspora is across the USA and Canada is well represented in all professions including arts and culture,” said founder of Jamaicans.com Xavier Murphy. “Not many people know about the accomplishments of the Caribbean Diaspora because we have no visibility in the media. The Caribbean Diaspora Weekly is one of the few programs that will provide some visibly for our community. This is the main reason we are a partner.”

“We are extremely proud of the content and quality of programming we have been able to produce with The Caribbean Diaspora Weekly, and we are excited to present it to the greater South Florida audience,” said Robertson.

Thompson, the show’s producer and host, wants to show the world that the Caribbean is not just about carnival, stage shows and “every ting sell off.” She wants to highlight the accomplishments of the Diaspora and feature more family-friendly events such as the annual Jerk Festival. Born in Jamaica but based in South Florida, she has worked in radio and TV after touring the world as a vocalist with stars such Beenie Man, Kevin Lyttle and Kymani Marley.

“I myself have spent many sleepless nights to get it to the level where viewers from every community, not just West Indians, can be educated and entertained by the content,” said Thompson. “We’ve proven the quality, now we need to prove that there is a demand in the community. Money is our greatest need now.”

The entire first season was created without any sponsorship – just with the support of volunteers, interns and consultants, including Lukkee Chong, producer of Island Stylee, Thompson said. Thompson hopes that now that show has established itself sponsors and advertisers will come – and more interns for both on camera and off camera work, especially people interested in journalism and editing.

In the meantime, Thompson is ready for the South Florida launch. She is knocking on doors looking for funds, whether through grants or donations. But she is counting on the Diaspora’s help with the money needed to pay the network.

“The support of the community by crowdfunding donations shows that there are numbers of people behind us,” Thompson said. “Every time someone gives $5 or $10 it’s another testament that they support the endeavor. We’re after money, but even more so after support.”