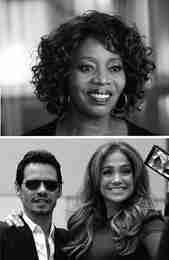 MIAMI-DADE – Alfre Woodard, Jennifer Lopez and Marc Anthony were all on the campaign trail for Hillary Clinton in South Florida last weekend. The three megastars urged voters to cast their ballots early to help Clinton beat her opponent, GOP nominee Donald Trump, and become the next president of the United States.

Woodard made stops in Ft. Lauderdale and Naranja for an early vote block party and canvass kick-off, respectively. Lopez and Anthony performed a free concert for thousands of people at downtown Miami’s Bayfront Park, where they were joined on- stage by Clinton at the end of the night. Their main message: It’s not just important to vote, but to do so early.

Woodard – who is an award-winning actress and political activist – told the South Florida Times she is baffled that people need more proof than Clinton’s extensive track record to convince them to vote for her.

“Since she left the security of her parent’s house, (Clinton) has been standing up and stepping out for women and for children all over the country – and particularly for women who do not have access,” Woodard said. “When you move women forward you move the whole family forward. With everything she has worked for … I don’t know what else a person could base their vote on.”

“The fact is she is an honest person … The very people who act as if Hillary Clinton went to the store for them and didn’t come back with their change; those are the very people that don’t even think our lives matter,” Woodard said.

To those who said they are not voting in this election, Woodard challenged them to re- think their stance.

“You should not sit out a vote because it’s the only power you have in a democracy and it goes on with or without you. When you don’t vote that’s exactly what you’re doing – you’re letting someone else decide your every day. Voting all the way up and down that ballot matters tremendously,” Woodard said.

Lopez said Clinton was the only choice that “makes sense.” Introducing Clinton as “the next and first female president of the United States,” Lopez reiterated how critical it was for Floridians to get out and vote.

“This election is one of the most important in our lifetime. We’re at a crossroads and we have to take the right road to the future. We have the perfect person to take us there,” Lopez said.

Anthony echoed his ex-wife’s sentiment, saying it was an important moment in history for Latinos. “I’m here to support two women that I trust with my life, that I trust my children with,” he stated.

Clinton used the concert to encourage voters to get to the polls early and take aim at her opponent.

“Donald Trump is out there stoking fear, disgracing our democracy and insulting one group of Americans after another,” Clinton said. She then asked the crowd if they would let Trump get away with that.

The weekend blitz came right on the heels of news from FBI Director James Comey, who said they would re-open the investigation into Clinton’s emails after finding evidence linking some to former New York Congressman Anthony Weiner during a separate investigation. Weiner is the estranged husband of top Clinton aide Huma Abedin who resigned from his congressional seat in 2011 after it was discovered he was engaged in illicit behavior online with women on social media.

Now he is under investigation for allegedly ‘sexting’ a minor.

In Florida, Clinton’s lead over Trump has dissipated. Recent polls show they are within less than one-point of each another, but Clinton’s campaign is working hard to pull ahead.

As such, Clinton also campaigned at New Mount Olive Baptist Church in Ft. Lauderdale and The Manor Complex club in Wilton Manors, before heading to other parts of Florida.

The two institutions boast predominately black and gay audiences, respectively. Clinton told the groups she’s been fighting for underdogs her entire life and has no plans of stopping now.

Woodard believes Clinton will keep her word, preserve President Barack Obama’s legacy and is the best choice for America. “She has accumulated the experience and the contacts that are unparalleled. Even President Obama and President Bill Clinton talk about how prepared she is so much more than even they were,” Woodard said. “Right now there’s not a person in the country more fit that we need more than Hillary Clinton as the Commander-In-Chief. The world desperately needs her as the leader of the free world. We must continue to build on the progress. The choice has never been clearer.”