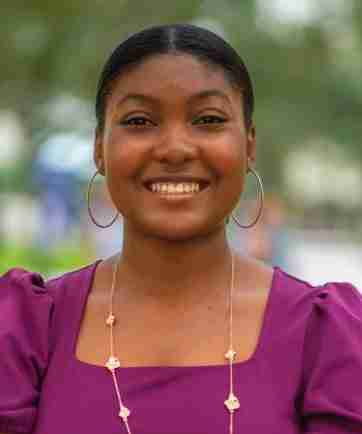 Miami, Fla. – Joni Spencer, a Florida International University (FIU) senior from Antigua and Barbuda, is a ﬁnalist for the prestigious 2023 Rhodes Scholarship.

If awarded the world’s oldest graduate scholarship, established in 1902, Spencer will become a full-time postgraduate student at the University of Oxford in England, where the acceptance rate is about 18 percent.

It is a chance of a lifetime for a student born in the West Indies, where 87 percent of the population is Black. About 95 percent of the country was destroyed by Hurricane Irma in 2017. That was a major setback for Spencer but didn’t stop her from pursuing her academic career in the United States, where she has recorded a 4.0 GPA.

“I’m so excited,” Spencer said. “I came to study in the U.S. because I wanted to have access to people with different viewpoints. FIU is an incredible school. It has this international community. People at FIU, they are so passionate about their research and so interested in what they are doing.

“I have come to incorporate it into my life goals to constantly be in an environment with people like that. Going to Oxford would allow me to be in this kind of community, and it would also allow me to learn about more perspectives and viewpoints.”

The chemistry and math major was part of a group of FIU students who participated in a Massachusetts Institute of Technology (MIT) research program this past Summer.

She and her peers studied projects to optimize a material for use in batteries for electrical cars, and how to make the cars a more efﬁcient, sustainable alternative to combustionengine vehicles.

At FIU, Spencer is studying chemical reactions that may help make life conducive in space, and analyzing possible drug treatments for COVID19 in biochemistry.

She said her research specialty is computational chemistry, a type of chemistry that utilizes computer simulation to help in solving complex problems.

Her goal is to use computational chemistry to uncover innovations for sustainable development, and ultimately help people protect themselves in the face of climate change.

Spencer is studying the ways fuel cells, that do not produce carbon emissions, can be introduced and adopted in technology and products like cars across the Caribbean, where hurricanes often leave destruction in their paths.

“Scientiﬁc discoveries could also open the doors to increased alternatives and infrastructure that could help the region prepare for climate events,” she said. “I want to make sure people get the resources they need in times of crisis.” Her way of helping, she said, is through science.

Spencer is also a student in FIU’s Honors College and a student leader in the National Society of Leadership and Success.

“Joni is a remarkable young scholar,” said FIU’s Director of Prestigious Scholar Development Ashley Kuntz. “Her faculty and research supervisors praise her intellect, character and work ethic. We can all be very proud she is representing FIU on the international stage. This is a well-deserved recognition of Joni’s academic accomplishments and of her potential to thrive as a graduate student at Oxford.”