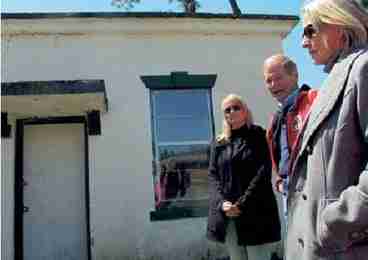 MARIANNA, Fla. – Amid a contentious debate that evoked race, spilled blood and child abuse, a state-created task force on Friday recommended that Florida move bodies found on the campus of a now-shuttered reform school and bury them somewhere in the state’s capital city.

The decision was not unanimous but it was indicative of the raw emotions that surrounded those struggling with the legacy of the Arthur G. Dozier School. The school, located 60 miles west of Tallahassee, was shut down in 2011. Some former students have accused school officials of physical and sexual abuse.

That same task force also recommended that two memo- rials noting the troubled school be placed in the capital and the county where the school was located. They failed, however, to agree exactly where the memorial should be placed in Jackson County, including if it belongs on the 1,400-acre school campus.

The Florida Legislature created the task force earlier this year to help sort out questions surrounding the school. It came shortly after the University of South Florida concluded a multi-year investigation where researches exhumed remains from 51 bodies. The task force was charged with recommending to the Legislature as well as Florida Gov. Rick Scott and other state officials what to do with unclaimed bodies and what type of memorial should be created.

The seven members spent nearly a day debating their recommendations and the schism over what to do reflected fault lines among local residents, family members of those who died there and former students who say they were abused at Dozier. Jackson County officials on the task force wanted the bodies placed outside of their county, citing several reasons including that negative publicity had hampered economic development in the small mostly-rural county.

Members of the White House Boys, a group of former students named after the white building where they say they were abused, also wanted the bodies buried away from the school. They said many of the remains there were never properly buried and that some who died had tried to run away from Dozier.

“To return those bodies there would be like killing them again,” said Bob Baxter, who was sent to Dozier in 1950.

The school, which opened in 1900, initially was a home for children convicted of serious crimes. But researchers say this was expanded to include minor offenses including truancy.

The final USF report concluded that nearly 100 people, including two adult staff members, died at Dozier between 1900 and 1973. But the records are incomplete and in some instances there are no records of where people were buried. One 16 year-old in 1960 died from gunshot wounds by “person or persons unknown.

The vote on where to rebury any unclaimed bodies was not unanimous. Dale Landry, who was representing the NAACP on the task force, said that some people wanted to wipe away all traces of the school and questioned if some in Marianna were refusing to acknowledge what happened there.

Russell Meyer, executive director of the Florida Council of Churches and a task force member, was also opposed to burying the bodies away from the school site.

“That land has been made sacred by the spilling of innocent blood,” Meyer said. “You could pave it over and build some new economic interest. It’s still built on sacred land with sacred blood.”