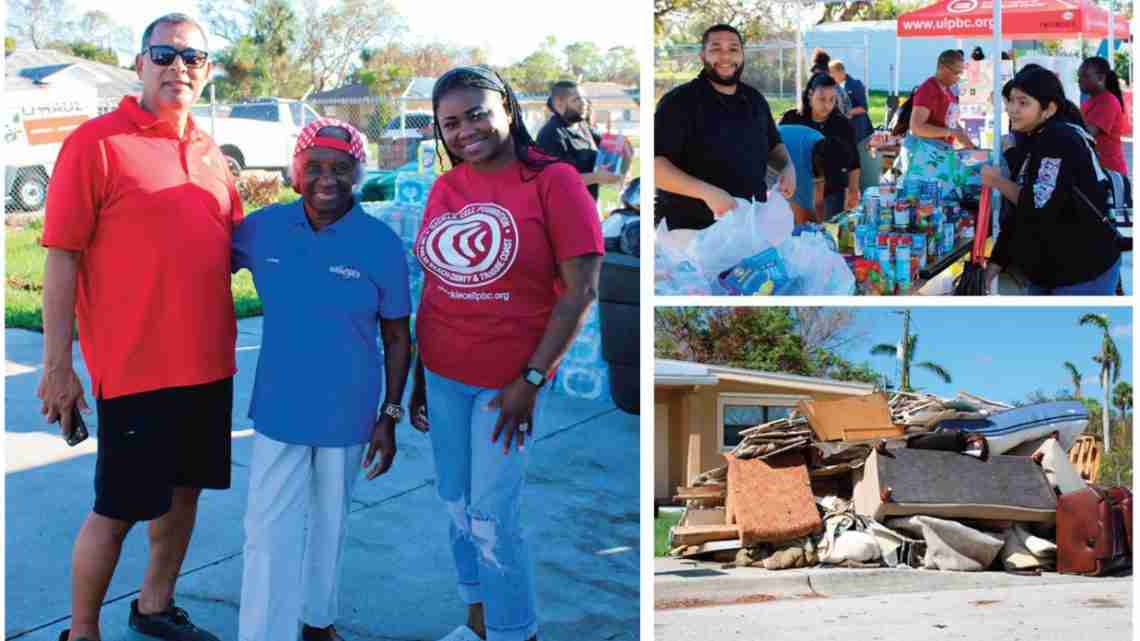 Fort Myers, Fla. – Most of the worst signs of Hurricane Ian’s devastation no longer were visible Sunday when the Inlet Grove High School Hurricane Relief Drive arrived in Fort Myers with a truckload of supplies and a busload of students, teachers and staff members to distribute the aid. Clearly visible was the determination of those who had weathered through the storm to get back on their feet.

There were heartfelt conversations between the Inlet Grove Hurricanes of Riviera Beach and those who drove, bicycled, or wheelchaired to Mt. Olive AME Church on Orange Street to receive the items including hand sanitizer, paper towels, toilet paper, plastic utensils, paper plates/cups, battery operated fans/batteries, laundry detergent, wipes, Pampers, toiletries, ice and cases of bottled water, as well as freshly cooked hotdogs, burgers and other food.

Student members of Inlet Grove’s Advanced Journalism class, Multimedia Club and Student Government Association (SGA) not only assisted in but documented the effort.

“I got really excited and emotional at the same time in putting this together because I know the help was needed,” said Lynn Barnes, administrative assistant to Inlet Grove CEO Dr. Emma Banks. “I was hoping that people would really come out and help donate, which they did.”

“I stay in Lehigh,” said Ted Jackson of Mt. Olive, where the Rev. James C. Gibbens is pastor, “and we had a bunch of wind and rain, we didn’t get that much damage, but the people that really got damage was the people here in Fort Myers. Helping another person, that’s what it’s all about during this time of disaster. That’s when we all come together as one.”

Another church member, retired educator Nancy Elaine Kelly Simms, said during the event on Mt. Olive’s parking lot that because of her husband’s heart rate, “It was suggested we go the ER, and they ended keeping him overnight. So for us that was the worst part of the whole ordeal. We did discover that he has a heart condition, which was a good thing looking back because now they can start to treat him.”

Abdul-Haq Muhammed, founder and executive director of the nearby Quality Life Center of Southwest Florida, Inc., said the storm “a major inconvenience in my life, and for others it has been a true tragedy.” Although his home, like others in the historic Dunbar and other African-American communities, was away from the coastline, “It’s near a creek, called Billy’s Creek,” he said. “So there was serious flooding, about two feet of flooding.”

Muhammad drove CEO Banks and some journalism students in his car through some of the areas not accessible by the bus, showing and describing the storm’s impact. The previous day, his Quality Life Center, widely known in the area as “The Q,” had hosted an historic Town Hall & Community Visitation with members of the Florida Black Legislative Caucus, who also toured some of the areas that media reports noted had been neglected while mostly White areas had been served.

As the ’Canes got a look at the current state of Black Fort Myers, debris that previously had blocked streets, along with damaged furnishings and flooring from homes recently flooded by the rising creeks, was piled on sidewalks awaiting removal as recovery efforts pick up steam.

“I wished we could have gone deeper into the communities where the help was really needed,” Barnes said. “I just hope other people start to see what’s going on and go into the areas that were most affected.”

A “Thank You Jesus” sign on one street seemed to say, “Sure, we got hit. Hard. But we’re still standing, by the grace of the Almighty.”