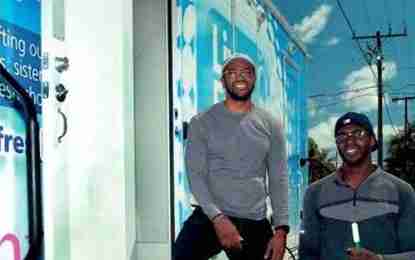 Chris Bentley, (right), is CEO and Founder of Live Fresh, Inc. which operates a mobile shower trailer for the homeless. He is joined by longtime friend and helper, Carlos Miller.

RIVIERA BEACH, Fla. – They lined up one by one outside the St. George’s Church in Riviera Beach. Yes, some came to get the free meal offered by the church. But there was a different line. And this one was for “fresh” showers in the big mobile trailer parked outside the church. The trailer, under the auspices of “Live Fresh, Inc.” is the brain child of Chris Bentley, 34, of Riviera Beach. His creation is getting lots of buzz for offering the homeless much needed fresh showers. The Live Fresh, Inc. mobile unit has six shower stalls and offers toiletries to boot, and the homeless line up every Thursday at St. George’s to get cleaned up and refreshed, feeling far better than when they got there.

And contrary to popular belief, the homeless as discovered on this day, don’t like being filthy, smelly and the object of people’s ridicule. That’s a misnomer. In actuality, they want to be clean, fresh, and smelling and looking good, just like anyone else. And that’s evidenced by the lines at St. George’s each Thursday from 11 a.m. to 1 p.m. when they wait in line so they can get their shower, undergarments, deodorant, soap, shampoo, lotion and even clothes when available.

Eartha Thomas, 49, was one of those waiting in line. She says she is homeless right now, and the shower is a Godsend while she’s in between places to live. “I’ve been here five or six times and I thought it was a good thing having their stalls here … because a lot of us, we bathe at the beach, and here, they give us towels, deodorant, soap and even clothing like bras, socks and underwear. It’s things we can’t afford to buy or can’t afford to wash,” said Thomas, who came out of the stall with a smile on her face, saying she felt refreshed and especially clean.

David, 31, known as “Gin-G-Breadman,” says he too, has come to the Live Fresh trailer a half-dozen times. “I come here because I’m homeless,” he said. “And I don’t have the energy to walk to West Palm Beach so I come here. I feel just a “tiny bit” better to shower. It’s a part of life that a person has to go through. They give you soap and deodorant and many other donations,” he said.

Paul, 60, says every time he comes, he feels blessed. “It’s good and it’s a blessing and very convenient,” he said as he waited next in line for an empty stall.

Bentley has expanded into Broward County with his mobile shower unit. The Fort Lauderdale component is called, “Live Fresh Hope South Florida,” and operates at six locations there.

The homeless say it’s something they cherish. 29-year old Sabrina says it gives her dignity as she tries to get off the streets. She’s pregnant and says she doesn’t want to raise a child on the streets.

She hopes to get into housing soon. “I felt good to get a good shower and wash my hair today. Normally I bathe in the sink at the park, but there’s no hot water there. Today, I got a fresh, HOT shower! Thank God for that!” she quipped.

Bentley said he got the idea while he was living in New York working and in school at Columbia University. “Being in New York City and seeing homelessness on such a large scale, and seeing them in coffee shops and how they’re treated –it gave me the motivation to start the program. But it made sense to do it at home, the place that gave me the most in life,” he said of Palm Beach County, where he’s from. “If the homeless are never given a leg up, how can they do better?” he poignantly asked.

Bentley said he also assessed how he feels when he’s feeling and looking good and was even further inspired to start the program.

“When I’m feeling down about something, the first thing I do is take a fresh shower, put on a nice shirt, get a haircut and it gives me the impetus to push forward through anything I’m enduring. I knew others would feel the same way.” Thus, Live Fresh was born. It operates through various grants and sponsors, but has been asked to expand and duplicate the model in other cities such as Fort Lauderdale and Miami.

Bentley, who is from a highly successful family rooted in business and entrepreneurship, said he obviously learned business from his parents, but he also learned about compassion from them. “I’ve learned to have a caring heart. If you help others, you have no choice but to be blessed. The homeless is the forgotten community. A little dignity can lead them in the right direction.”

He especially recalls the words of one of his clients, Blake, who came to the shower after incarceration: “It’s like raindrops from heaven!”

To find our more about Live Fresh, Inc., visit the website at www.livefresh.org, or contact Bentley directly at info@livefresh.org or chris@livefresh.org.

Next post Judge sides with Florida governor in removal of prosecutor