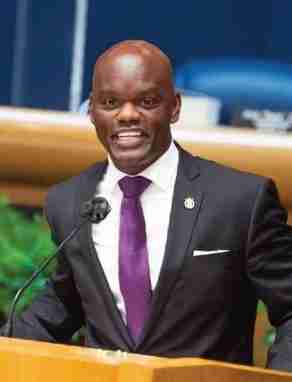 Biden last month absolved thousands of such individuals, saying the current system “makes no sense,” while sending pot stocks soaring and calling on governors across the U.S. to follow suit.

Biden’s pardons apply only to federal offenders convicted of “simple marijuana possession” as well as those charged in the District of Columbia.

More than 6,500 individuals with prior convictions for simple marijuana possession were impacted by the pardons, and thousands more through pardons under D.C. law.

The pardons will not be extended to those who weren’t U.S. citizens and were illegally in the country at the time of their arrest.

According to the state Constitution, executive clemency is the process by which the governor may, with the approval of two members of the Cabinet, grant full or conditional pardons, restore civil rights, commute punishment, and remit ﬁnes and forfeitures for offenses.

“Simple possession of marijuana has impacted many individuals," McGhee said. "It has imposed needless barriers for these individuals when it comes to obtaining jobs, housing, and educational opportunities. It also impacts the families of these individuals and impedes their ability to provide basic necessities for their families.

"I urge Gov. Ron DeSantis to use his executive clemency power to pardon these individuals, so they can right past wrongs and move forward with their lives."

Fried said she wrote to DeSantis to include pardons on the Dec. 14 State Board of Executive Clemency agenda.

“What you heard from the president is what I’ve been saying for years: Our policy around cannabis consumption, from a recreational and medical perspective, has been unjust for far too long," Fried said during a press conference at the state Capitol.

“In Florida, and America, we have prosecuted people of color and those in historically disenfranchised communities at a far higher rate than their white counterparts.”

“What we are seeing at the federal level is an extraordinary step forward in the name of justice. President Biden has called on governors to pardon simple state marijuana possession offenses, and Gov. DeSantis needs to do exactly that.”

Fried said Florida Department of Law Enforcement’s (FDLE) records show that over 17,000 Floridans were arrested for possession of marijuana in 2020.

According to the American Civil Liberties Union, Blacks are 3.64 times more likely than Whites to be arrested for marijauna possession despite cannabis use by both groups being equal.

"Regardless of the law’s intent, the criminalization of marijuana possession has done little to make Floridians safer and has actively done more harm through regressive consequences and discriminatory enforcement," the ACLU said in a statement.

The ACLU said between 2010 and 2018, there were 6.1 million arrests in the United States for marijuana possession.

In 2018 alone, police made more arrests for marijuana than for all violent crimes combined.

A conviction of any crime in Florida can cause people to lose access to public beneﬁts, student loans and struggle to ﬁnd work, Fried said. "The burdensome consequences of enforcement have also yielded discriminatory effects,."

The Southern Poverty Law Center, which also supports the pardons, suggested the “War on Drugs” has evolved including bipartisan reforms and the 2016 constitutional amendment legalizing medical marijuana use which 71 percent of the voters approved.

“Even so, there are people sitting in Florida’s jails and prisons whose only offense is having a small amount of marijuana in their possession," the center’s policy research director Andrea McChristian said in a letter to DeSantis aimed at the Dec. 14 meeting.

“It is common sense for Gov. DeSantis to prioritize granting full pardons for Floridians with simple marijuana possession convictions. We know these people are not a threat to society, and the savings to taxpayers ensuring these individuals are no longer incarcerated is something all Florida residents would appreciate.”