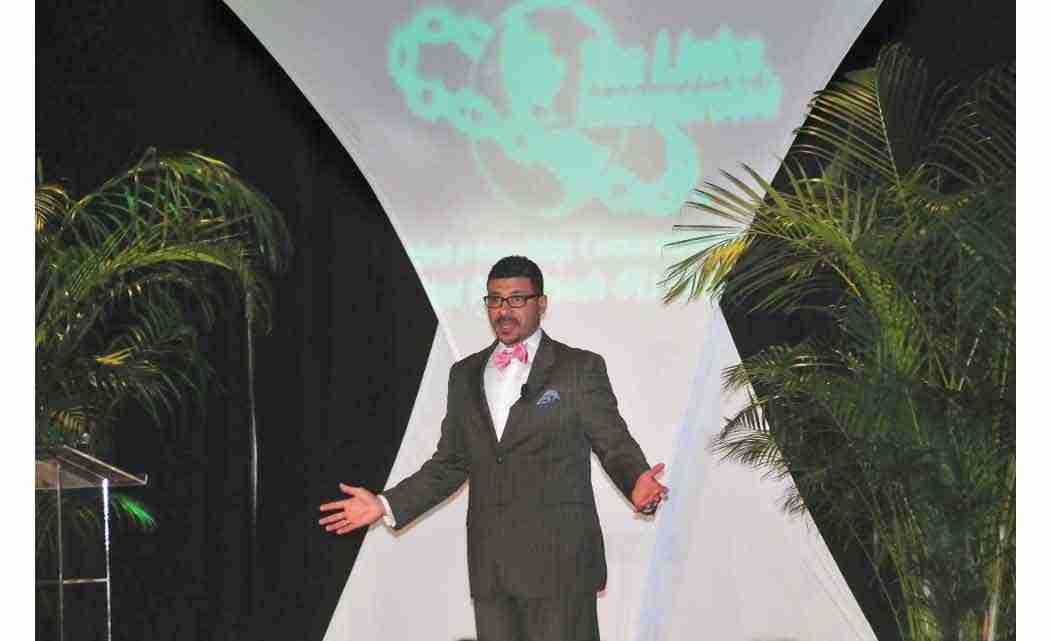 Palm Beach gardens, Fla. —   Steve Perry Ph.d, known as ‘America’s Top Educator,’ stopped by South Florida to tell a well-heeled African-American crowd that while he’s pleased they are fairing well financially, he’s calling them to task to do more for the generation of blacks coming behind them.

Perry addressed over 400 well-to-do blacks who attended the 36th Annual White Rose Luncheon, a scholarship benefit that included a fashion show by St. John Boutique of Palm Beach. Hosted by the West Palm Beach Chapter of The Links, Incorporated, Perry reiterated that this crowd was clearly not the norm – touting their ski trips, St. John suits and travel abroad.  He said although he is impressed with the audience’s power and success, the next generation –their children and grandchildren are not on tap to do as well.
The famed educator was the organization’s keynote speaker for the event, held last Saturday at the PGA National Resort in Palm Beach Gardens. Perry delivered a riveting and candid message about America’s black middle class and how they have amassed the power to change the institution of education and more.

“The luncheon was a huge success,” said Delores Oliver Calloway, luncheon chair. “The guests said they were challenged, inspired and motivated by Perry. Many said it was the best luncheon they’ve
attended.”

Perry, who’s always passionate and blunt about our education system, or lack thereof, became a household name when he was featured on CNN’s Black In America series a few years ago. He is also a CNN and MSNBC education contributor and a columnist for Essence Magazine. Perry’s commitment to excellence in education led him to start Capital Preparatory Schools in 2012 with  the  objective  to  open schools  that  provide  low  income students and their families  with an educational experience that he considers a right, not just an opportunity.

As head of schools, Perry has been instrumental in advocating for, developing and opening the Capital preparatory Harbor School in Bridgeport CT, for 2015-16. The bestselling author of, Push Has Come To Shove: Getting Our Kids The Education They Deserve – Even If It Means Picking A Fight, plans to open the Capital Preparatory Harlem School in 2016-17 as he continues to create “high quality, high performing schools.”

Perry also knows firsthand about poverty. Born into his family’s third generation of poverty on his mother’s 16th birthday, he believes that the success of a life is determined by where you end, not where you start. He has used this philosophy to help transform the lives of many poor and minority children by providing them with access to a college education.

But Perry admonished the crowd that providing scholarships and mentoring minority students is not the panacea. If the system is broken, providing them a scholarship is not going to get them to college, he advised. Perry pushed the audience to move toward putting vouchers in the hands of minority students so they can attend the school that’s best for them. “People think I’m pro-charter schools. I’m for ‘good’ schools, whether that’s traditional or charter school. I am for ‘choice schools,’ however,” he said.

In an interview with the South Florida Times, Perry said it’s a misnomer that minority students are harder to educate. “Kids are kids,” he said. “They don’t know what color they are until we tell them. The only reason minority kids don’t do well, is because the people teaching them don’t see them as humans.”

Perry said love is the key to getting kids to learn. “You have to love the children. And with love comes structure and expectation that they will do well. When you put love first, the adult whims are pushed aside.”

America overall is doing a terrible job at educating our students, according to Perry. “Seventy-five percent of the students are not ready to enter college. And we’re in the bottom third in the nation in terms of education. That’s horrible,” he lamented.

Virginia Smith, a member of the Links and a 34-year former educator, said we all play a role in educating our students. “I agree with his message that middle class blacks need to reach back. We have not done enough to carry our black kids nor shared the black struggle enough.”

“Dr. Steve Perry was a phenomenal speaker.  He shared several golden nuggets, and as a parent with children in school, I will do my part to make sure that they are getting the best foundation to help them excel later on in life. Every year, our local chapter provides scholarships for students, so having an educator come and speak supports our efforts in the community.”