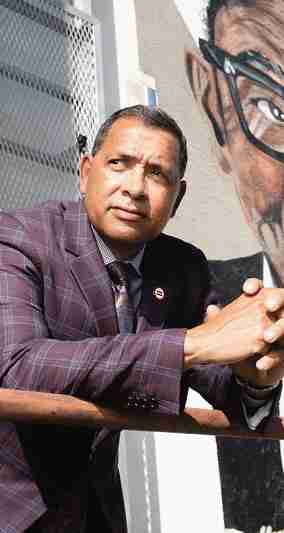 West Palm Bach, Fla. – Patrick Franklin, president and CEO of the Urban League of Palm Beach County (ULPBC), said he literally dropped the phone upon learning that his organization had received $5.1 million from the foundation of philanthropist MacKenzie Scott, former wife of Amazon founder Jeff Bezos, to continue their works in helping the needy.

Franklin announced Sunday that Scott gave a sizable donation to 25 of the 90 Urban League branches nationwide and his was one of them in Florida, along with Pinellas County (St. Petersburg/Clearwater).

Scott has a net worth of $33.4 billion, making her the third wealthiest woman in the United States behind Alice Walton of Walmart and Julia Koch of Koch Industries, according to Wikipedia. The MacKenzie Scott Foundation could not be reached for comment.

Until now the largest single gift the league has received during his tenure is $250,000, for which he was very grateful for, but “Very rarely does a Black organization receive this sort of donation,” said Franklin. “This is usually given to the ‘sexy’ nonproﬁts, not us.”

“I think this is fantastic,” said Dr. Emma Banks, founder and CEO of Inlet Grove Community High School in Riviera Beach and a longtime Urban League board member.

“This is so well deserved. I’ve been on his board for 13-14 years and I’ve witnessed him take the organization to another whole level,” said Banks. “He’s all about helping families. I hope others will take heed and do the same. I really do because he’s deserving.”

Carlton Ricky Wade, league board chairman and a McDonald’s franchisee, said the award “is a blessing and a testimony to the great work our staff does for the Urban League of PBC and for the communities we serve. This is a huge game changer for us and allows us to have a greater impact on our community.”

Franklin said he plans “to meet with my board and see how we can continue and expound on our help to those in need. This really is a game changer and we’re about making a difference in the lives of our clients. We plan to change the landscape of the community by helping those who need our services,” he said. “We plan to sit around the table and decide how best to do that. This really is helping us to be better.”

“We didn’t ask for this, we didn’t request it, we didn’t write a letter,” he said. “They found us, and we’re going to use it to make positive change for those we serve.”

Wade said the gift “gives us a strong ﬁnancial foundation for our agency as we plan for the years to come.”

It also will make a difference to other potential donors that Scott has vetted and selected the ULPBC for her philanthropy, Franklin said. “This will cause others to take a look at our organization and feel comfortable giving to us on such a level.”

Franklin will mark his 21st year as league CEO in February. The organization will enjoy its 50th anniversary in May. “We will certainly have something to celebrate,” he said.

Wade called it “the best holiday gift we could have received!”

Next post Miami Mayor Suarez promised $1 million for Circle of Brotherhood but $250,000 was offered