Young Broward author is a hit at Science Museum 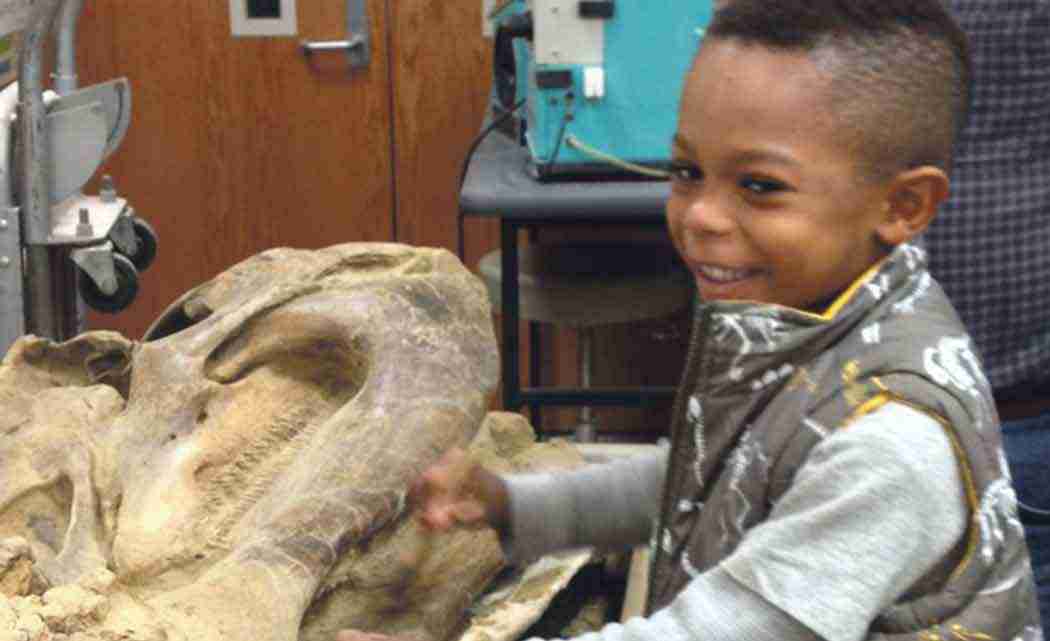 RALEIGH, N.C. — Most 5-year-olds (or adults for that matter) can barely read Spinosaurus, Dromaeosaurus, or Tyrannosaurus rex, let alone write a whole book about dinosaurs, but 5-year-old South Florida native Christopher Isaiah Penn Smith, can and did.

In fact, the vibrant, energetic kindergartener wrote and published Guess Who, Mr. Dinosaur? last year at age 4 while in preschool. Chris lives in Cooper City and attends kindergarten at Greentree Preparatory Charter School.

When Emelia Cowins, the Assistant Communications Director for the North Carolina Museum of Natural Sciences in Raleigh heard about Christopher’s book, she immediately knew he had to come meet some of his favorite dinosaurs in person. The museum recently opened its newest exhibit, The World’s Largest Dinosaurs. Christopher and his book were a perfect match.

Earlier this month while visiting his family in North Carolina, Christopher was invited by the museum to be the story time guest reader and for a book signing. At the event, he sold and autographed his book. Christopher’s cousin, national recording artist Yolanda Rabun, and guitarist Emily Musolino accompanied him in two story-time sessions with the song, Guess Who, Mr. Dinosaur?, which was written for the book.   It was a sing-a-long hit, especially with Chris’ younger brother, Jacob, as well as with the other children and their families.

Museum Early Childhood Educator Beth Cranford had live animals for the kids to learn about and touch. Combined, both story time readings brought in 80 attendees, the museum’s highest attendance, ever. During his visit to the museum, Christopher met Lindsay Zanno, director of the Paleontology and Geology Research Lab, and museum director, Emlyn Koster. He was also given a special tour of the museum’s fossil collection by senior paleontologist Vince Schneider, and was able to participate in preparing a 70-million-year-old specimen for research. Of course, he visited the museum’s newest traveling exhibit, the World’s Largest Dinosaurs, which explores the biology of a group of uniquely super-sized dinosaurs—the long necked and long-tailed sauropods, The exhibit runs through April 12.

Christopher’s favorite subject is dinosaurs, which led him to begin drawing similarities between the features of dinosaurs and those of modern-day animals. Guess Who, Mr. Dinosaur? is a children’s book and teaching tool about the shared features between ancient dinosaurs and modern day animals. The book targets preschool and elementary readers, ages 3-6. The book also provides the pronunciations of featured dinosaurs and two fun learning activities — the “Dino Match-Up” game and a coloring page. Each activity encourages creative thought, dinosaur and animal recognition and fine motor development.

For more information about the book, visit http://guesswhodinosaur.com. The book can be purchased for $9.99.