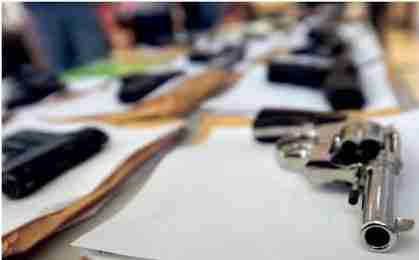 NEW ORLEANS – In 2016, criminal cases that played out in New Orleans courtrooms drew national attention while providing lesson material for anyone hoping to drive home the point that sometimes a gun is best left holstered or at home.

January brought the trial of Trung Le, who had found himself in a Bourbon Street gunfight a year-and-a-half earlier.

Prosecutors say he had been summoned by friends in the French Quarter after somebody stole their marijuana. He brought a gun with him. It was never entirely clear what sparked the exchange of gunfire with a stranger on Bourbon.

Le escaped unscathed and the other shooter has never been found, but bullets hit 10 people – many of them visitors guilty of nothing more than enjoying the city’s boozy nightlife. One young woman died.

The jury didn’t buy the defense claim that Le was a hero who saved his own life and those of his friends. The 23-year-old Le is now doing 60 years.

Cardell Hayes’ trial came at year’s end. He hasn’t been sentenced yet but New Orleans District Attorney Leon Cannizzaro has made it plain he’ll be pushing, again, for a 60-year sentence for the death of former New Orleans Saints star Will Smith and the wounding of Smith’s wife on a night in April.

Smith had apparently lightly bumped Hayes’ Hummer that night and Hayes, moments later, ran into the back of Smith’s Mercedes SUV. The defense insists that was an accident, and that Hayes was following Smith to get a license number and notify police.

Hayes, the father of a 6-year-old, has no serious criminal record to speak of. And there’s no indication that he carried the gun in his car for anything other than self- defense.

But his self-defense claim in Smith’s killing didn’t wash. He insisted that an angry and drunk Smith was the aggressor and that he only fired after he saw Smith take a gun from the Mercedes and heard what sounded like a gunshot.

A pathologist’s report confirmed that Smith was intoxicated, and witnesses said he was loud and angry. But there was no evidence Smith ever touched the gun hidden in his car. Prosecutors believe he may have been going for it after Hayes started firing – begging the question of how well he would have fired it and who else might have been hit, given Smith’s high blood- alcohol level.

The year also brought an end to six drawn out criminal cases arising from the shooting deaths of two people at the hands of New Orleans police on the Danziger Bridge amid the chaos that followed Hurricane Katrina in 2005. Four ex-cops pleaded guilty in April in connection with the actual shootings. Another April guilty plea came then from a cover- up participant and the final plea, in November, came from another involved in the cover-up. Sentences ranged from probation to 12 years.

There was a year-end post-script this month when lawsuits were settled between the city and survivors of the Danziger tragedy, as well as the shooting by police of an unarmed Henry Glover, also amid the post-Katrina mess of 2005. The settlements were announced at a ceremony involving police, survivors of the violence and relatives of the victims. City officials spoke about the reforms that followed the tragedies. There were prayers and words of forgiveness, all seeming especially appropriate, coming as they did in the Season of Hope.

But the gun violence continues. There was another multiple-shooting on Bourbon Street last month with one dead and nine hurt.

The question remains: Is anyone learning any lessons?