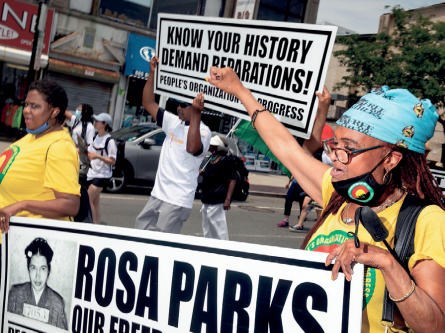 Fifth in a series.

Julian Castro, a Latino who served as housing and urban development secretary in the Obama administration, once said on MSNBC, ““It is interesting to me that, under our Constitution and otherwise, we compensate people if we take their property. Shouldn’t we compensate people if they were property sanctioned by the state?” Nearly three in four African Americans agreed, a 2019 poll by the AP-NORC Center for Public Affairs Research found. Some European Americans also agree.

“People say ‘slavery was so long ago’ or ‘my family didn’t own slaves,’” Chuck Collins, author and program director at the Institute for Policy Studies, told CNN. “But the key thing to understand is that the unpaid labor of millions – and the legacy of slavery, Jim Crow laws, discrimination in mortgage lending and a race-based system of mass incarceration – created uncompensated wealth for individuals and white society as a whole.”

But the poll also found that only 15 percent of European Americans support reparations, although 54 percent conceded that the legacy of slavery continued to impact African Americans “a great deal.” Then Senate Majority Leader Mitch McConnell of Kentucky proclaimed that “none of us currently living are responsible” for America’s “original sin.”

Some opponents cite the Bible. “When Christ came to save the world from its sin—including slavery—he did not start by chairing a 13-member commission with his disciples,” Laura Baxter, a lawyer and college professor, wrote in The Federalist in June 2019. Baxter quoted Ezekiel 18:20: “The son shall not suffer for the iniquity of the father, nor the father suffer for the iniquity of the son. The righteousness of the righteous shall be upon himself, and the wickedness of the wicked shall be upon himself.”

However, several religious groups acknowledge there is a debt that must be paid. A recent panel discussion called on the faith community to support and to lead the way towards making reparations happen, The Associated Press’ Luis Andres Henao reported.

“The faith community not only can lead but should lead, and is in a unique position to lead,” the Rev. Iva E. Carruthers, general secretary of the Samuel DeWitt Proctor Conference, told the session organized by AP, The Religion News Service and The Conversation news organization.

“Reparations is not a transfer of money from white people to Black people. It’s rather what this generation will do to correct the wrongs that previous generations have started,” said the Right Rev. Eugene Sutton, the ﬁrst African American bishop of the Episcopal Diocese of Maryland which decided last year to create a $1 million fund to support students, nursing home residents, small-business owners and others.

The Union for Reform Judaism, the largest Jewish denomination in North America, comprising more than a third of the total U.S. Jewish population in 850 congregations voted in support of a Congressional reparations study commission during its recent biennial meeting in Chicago — a ﬁrst by an American Jewish organization, the Religion News Service’s Yonat Shimron reported. She noted that “some early Jewish Americans were among slave traders and owners.”

Still, some prominent people reject paying reparations, including former President Barack Obama and the lone Republican African American Senator, Tim Scott, of South Carolina. “Essentially a conversation about reparations is just something that’s not even a realistic possibility. So it’s something I don’t think we [should] spend any time conversing on,” Scott once said.

Obama, who said paying reparations is impractical, told journalist and writer Ta-Nehisi Coates in an interview which The Atlantic published in December 2016 that, “as a practical matter, it is hard to think of any society in human history in which a majority population has said that, as a consequence of historic wrongs, we are now going to take a big chunk of the nation’s resources over a long period of time to make that right.”

The ﬁrst African American president expanded the debate beyond descendants of slave owners and the enslaved, asking, “how do Latinos feel if there’s a big investment just in the African American community, and they’re looking around and saying, ‘We’re poor as well. What kind of help are we getting?’ Or Asian Americans who say, ‘Look, I’m a ﬁrst-generation immigrant, and clearly I didn’t have anything to do with what was taking place.’”

The African American Democratic Rep. James E. Clyburn of South Carolina, credited with helping Joe Biden win the presidency, is also a skeptic, telling the Post and Courier, “I think pure reparations would be impossible to implement. We can deal with the issue [of racial inequality] if we just admit, ﬁrst of all, that it exists and then come up with some straightforward ways to deal with it,” The Washington Post’s Eugene Scott recalled.

But, as even the proposed commission languished in Congress, Coates made a stirring pitch in support of the study and for reparations in a 15,000word argument in The Atlantic in June 2014. “Having been enslaved for 250 years, black people were not left to their own devices. They were terrorized. In the Deep South, a second slavery ruled. In the North, legislatures, mayors, civic associations, banks, and citizens all colluded to pin black people into ghettos, where they were overcrowded, overcharged, and undereducated,” Coates noted

“Businesses discriminated against them, awarding them the worst jobs and the worst wages. Police brutalized them in the streets. And the notion that black lives, black bodies, and black wealth were rightful targets remained deeply rooted in the broader society.”