Koch brothers’ donation to the UNCF: Was this the wrong $25 million? 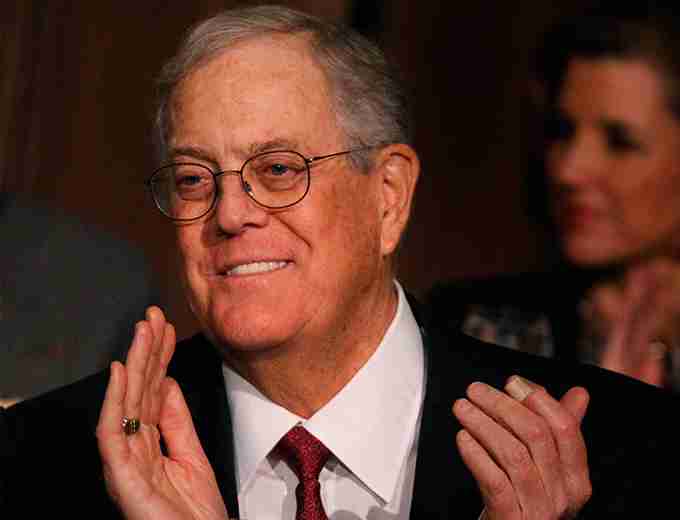 The United Negro College Fund, the primary fund-raising organization for private, historically black colleges, is a revered institution for many African Americans. Its successes are points of pride to many, and are vital to many black colleges.

When the UNCF announced one of its largest gifts ever on June 6, several took to Twitter to express shock and anger. One person wrote: “#UNCF Literally Sells Their ‘Souls To The Devil’ Accepting Checks From The #KochBrothers W/Out Knowing Their Evil History. Craziness.” Another tweet: “#Koch donation to @UNCF tells children everywhere that money is first and integrity is unnecessary. Sends the wrong damn message. Period.”

Others praised the gift: “Conservatism demands charity, where possible, assist the poor when government can’t. I applaud Charles and David Koch’s UNCF donation.”

Why this reaction, and debate, to a gift of $25 million that will help the UNCF, its member colleges and scholarship recipients at those colleges? The dispute has to do with the source of the funds (the Koch brothers), questions about whether the scholarships being created will favor people who share the Kochs’ ideology, and concerns that Koch associates will play a direct role in selecting scholarship recipients through two of the five spots on the scholarship selection committee.

The funds are coming from Koch Industries and the Charles Koch Foundation, with Charles (one of the Koch brothers who own the family business with their name; the other is David), and major backers of conservative and libertarian politicians, think tanks and other organizations. The brothers have spent scores of millions of dollars backing candidates who advocate sharp reductions in federal spending and who campaign against just about every initiative of the Obama administration.

Groups supported by the brothers have also worked with “voter security” efforts by conservatives in a number of states – efforts that proponents say are designed to prevent fraudulent voting, but critics say are designed to limit the turnout of low-income and minority voters. (Koch groups have maintained that they support the right of everyone who is legally entitled to vote to do so, and said that this isn’t one of their issues.)

Koch grants to higher education – typically linked to free enterprise economics – have also been controversial. At Florida State University, some faculty members questioned whether Koch associates were given too much academic influence in return for a grant. A faculty review found numerous instances in which the language in the agreement left the university vulnerable to “undue outside influence.” In many cases, however, universities have welcomed Koch funds. When Roman Catholic theologians criticized Catholic University of America for accepting Koch funds, the president of the university blasted the critics.

In the case of the gift to UNCF, $18.5 million will be used to create the UNCF/Koch Scholars Program, which will provide funds to “exemplary students with demonstrated financial need and an interest in the study of how entrepreneurship, economics, and innovation contribute to well-being for individuals, communities, and society.”

An additional $6.5 million will provide support for the UNCF and for its member colleges, with $4 million of those funds reserved to help the 37 UNCF member institutions help students who have been hurt by the denial of PLUS loans (a parent loan program). The shifts in PLUS eligibility standards have resulted in many parents of students at black colleges having their loan applications denied, and those denials have been cited as the reason many students have dropped out.

The agreement between the UNCF and the Koch organizations specifies that, for the scholarships, “an advisory board consisting of two UNCF representatives, two Koch representatives, and one faculty member from an existing school will be created to review scholarship applications and select recipients. Recipients will be selected based on their academic achievements as well as their interest in the program’s fields of study.”

Michael Lomax, president of the UNCF, said in an interview that Atlanta-based Georgia-Pacific (which was purchased by Koch Industries in 2005) is a longtime supporter of the UNCF, a relationship that continued after it became a unit of Koch Industries. And Lomax said he has been engaged in efforts to reach out to donors to UNCF to make them larger donors – and that the efforts to attract Koch have taken place over a two-year period.

He said that this gift was important not only for its size but for what the magnitude of the gift will support. The undergraduate scholarships will be for $5,000 a year – a sum that UNCF research shows has a significant impact on retention and graduation rates of students. The gift will also provide for mentors on each campus, and for an annual conference for students – and this builds on research showing that full engagement, not just money, increases the odds of student success. And he said that the support for colleges dealing with the PLUS loan issue was essential at this time.

Asked about the issues related to the Koch brothers’ politics, Lomax said that he does not consider anything political about potential donors. “UNCF has one principle that we hold on to – and it’s one that I looked at throughout this process, and that I’ve held firm to: that is that we believe and have believed for 70 years that our cause should be supported by all Americans, and therefore we urge all Americans to support UNCF.”

UNCF regularly lobbies for federal spending on certain programs, and UNCF member colleges and their students depend on many federal programs. Asked if there was anything inconsistent or troubling about taking money from philanthropists who lobby for deep cuts in federal spending, Lomax repeated his statement about how all Americans should support the UNCF. Asked if he believed Koch-supported organizations had promoted voter registration rules that are seen by critics as attempts to curtail black voting, Lomax did not respond except to repeat his statement.

He also said that there would be “no political tests” on scholarship recipients. Asked if a student whose interest in economics was from a leftist perspective could receive a grant, Lomax said that such a student could win, if he or she had appropriate grades and was ready to “engage with the program.” He said that the two members of the selection committee from Koch organizations would not change “the high standards” under which UNCF programs are run.

While Lomax declined to talk about the politics of Koch philanthropy, others have. When Koch interests were questioned in the past about political activities seen as potentially limiting black voting rights, Koch Industries released a statement denying this and noting a variety of black philanthropies (including UNCF) that have received support from Koch Industries. The $25 million grant comes at a time when some Democratic leaders – led by Senate Majority Leader Harry Reid – have tried to focus attention on the Kochs and their political contributions. The conservative website The Daily Caller ran an entire article on how Reid’s office wouldn’t comment on the Koch gift to the UNCF.

Marybeth Gasman, a professor of higher education and director of the Center for Minority-Serving Institutions at the University of Pennsylvania, has written several books about black colleges and philanthropy, including Envisioning Black Colleges: A History of the United Negro College Fund (Johns Hopkins University Press).

She said that she didn’t doubt that many individual students might benefit from the scholarships and that the UNCF “does need money” to help its member colleges. But she said that it was “wrong” to take these funds.

Koch organizations have been “deeply affiliated with the Tea Party,” which has repeatedly tried to undermine the interests and political activities of African Americans and institutions that support them, she said. “I think it is very, very important to think about who you are taking money from,” she said. “Yes, that money can do a lot of good for students. But it allows that organization to have quite a bit of influence.” Letting an organization like Koch have two of five seats on a selection panel “is not something we should be O.K. with,” she said.

To the extent the Koch organizations want to significantly reduce the scope of state and federal governments, they have the right to promote those views, Gasman said, but she asked if the UNCF should be associating with Koch in light of these efforts. Programs such as Pell Grants, student loans, Head Start and others have helped countless Americans, of all races and ethnicities, she said.

And these programs – endangered by the Koch political agenda of shrinking government – “have built the black middle class” and will contribute to the advancement of black students who are still impoverished, she said. This gift allows the Koch organizations to look good, and “there is too much at stake to take money from them,” she said. “I feel like the UNCF is getting into the position of being a puppet.”

John Lippincott, president of the Council for Advancement and Support of Education, said he understood why some eyebrows were raised about the Koch gift, and said that there were important issues for UNCF to consider in managing the gift. “But like the devil, the ethics may be in the details,” he said.

He said that – legally and ethically – donors can’t have a “controlling interest” in a gift or it isn’t a gift. So, for example, if Koch representatives held three of the five seats on the panel awarding scholarships, that would be problematic, he said. But having some influence is not necessarily wrong, he said. He gave as a hypothetical a situation where a donor gives money for a building and wants to sit on (but not control) a committee selecting the architect for the project. Someone saying “I want to be part of the conversation” is not necessarily wrong, Lippincott said.

The question to consider going forward with regard to the selection committee is “if the end result is one in which you look at it and the outcome is skewed in a particular way,” Lippincott said. He added that, in such a case, “I think you do have to say, ‘Is this because there is undue influence on the part of two members of the committee?’”

Asked if it should bother the UNCF that it is taking money from people who have pushed a political agenda that squeezes federal spending on which many black colleges rely, Lippincott answered this way: “Should it matter? Yes. Should that determine that they not accept the gift? I wouldn’t draw that conclusion.”

UNCF needs in a situation like this to make sure it uses “a thoughtful and deliberative process in which they raised the concerns” about Koch money, Lippincott said. “UNCF has to make a very conscious decision on the motivations and that the impact of this gift that will be ultimately positive.”