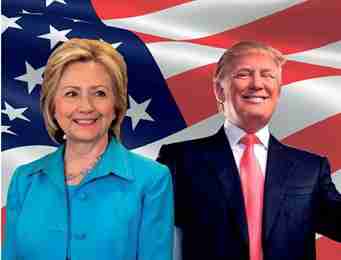 Sometimes in a parade there are people following behind the animals with shovels and bags to clean up after them. This is the scenario which Americans have been treated to ever since the Republican Party nominated Mr. Donald Trump as its candidate for the presidency.

But even their efforts have not cleaned up the mess which the real estate developer has been leaving in his trail.

The upshot is that voters are being asked to support a candidate who launched his political career by spending years in a racist attack on Barack Obama’s citizenship in an effort to delegitimize the first black President.

We are being asked to support a candidate who has refused to release his tax returns, in defiance of a long-standing tradition, one who has admitted to using loopholes to avoid paying federal taxes for probably two decades, one who has been sued over some of his businesses.

We are being asked to send to the White House a candidate who has no background in either domestic or foreign affairs and whose stated policies are at best confusing.

The Democratic candidate, Ms Hillary Clinton, on the other hand, offers a resume which includes being First Lady for eight years, spending her early career working for Marian Wright Edelman’s Children Defense Fund, spearheading a successful drive to provide health insurance to millions of children and serving two terms in the U.S. Senate.

On the international front, Ms Clinton has served as Secretary of State. In that capacity, she visited 112 countries, traveled 956,733 miles and spent a total of 401 days representing our interests abroad. She was also a key member of President Barack Obama’s inner circle, including times such as the attack on Osama Bin Laden.

She is, in fact, probably the most qualified person to seek the presidency.

But the Clinton candidacy is admittedly complicated by her decision to use a personal server for email communication while she was Secretary of State and the FBI, after concluding that she did not break any law, has resumed its investigation following discovery of another batch of emails on the laptop of the estranged husband of a senior aide.

Ms Clinton and her husband, former President Bill Clinton, have also come under scrutiny over the workings of their Clinton Foundation and possible influence-peddling, of which there is no proof.

She has been criticized for describing some African American youths as “super predators” nearly two decades ago when her husband was signing a law providing much harsher penalties for certain crimes. There is little doubt that the law led to the incarceration of millions of African
American men.

Ms. Clinton has admitted she was wrong to use a private email server. She has also conceded that the criminal justice law which her husband signed has had major implications for the African American community. She has pledged to promote criminal justice reform that would right the wrongs inherent in the system.

We believe the Democratic candidate is sincere when she says she will tackle such problems and stand beside black folks as we push for the dismantling of the socio-economic shackles that continue to keep us as second- class citizens which was built on the blood, sweat and tears of our ancestors.

We are called to action also not just because Ms. Clinton is clearly the better candidate but because of the reality that Mr. Trump’s campaign has provided white racists with what will inevitably be an enduring foothold in national politics.

We shall need allies in high places in the uncertain future that we and our fellow Americans face as a result of this most unfortunate presidential campaign. This means not just a Democrat in the White House but control of Congress and state houses down to the most local government.

That is why we not only reiterate the front page recommendation we made on Oct. 13 supporting Mrs. Clinton and Democrats across-the-board, such as Mr. Patrick Murphy for the U.S. Senate, but we strongly endorse them.

We truly can move the election in our direction but only if all of us who can vote do so, rejecting the efforts of those who want to make us cynical and either stay away from voting or vote against our own self-interests.

Next post Westbrook gets 35, leads unbeaten Thunder past Clips 85-83