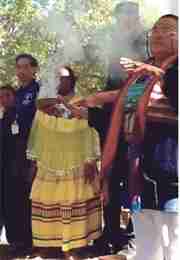 A traditional Seminole Maroon Spiritual Remembrance on Jan. 15, and two days of commemorative events on Jan. 27 and 28, will mark the 179th anniversary of the two pivotal 1838 Battles of the Loxahatchee River in northern Palm Beach County.

Admission will be free and open to the public for the events at Loxahatchee Battlefield Park, 9060 W. Indiantown Road, one mile west of Interstate 95 and Florida’s Turnpike in Jupiter.

The battles pitted 500 to 700 Native and African-American Seminole warriors, defending their freedom, lands and families, against approximately 1,700 ill- equipped but better armed U.S. soldiers and sailors and Tennessee Volunteers.

The events proved to be the turning point in the decades-long Florida Wars. Though undefeated, many of the survivors were captured after being lured to Fort Jupiter under a white flag of truce. They then were deported on the Trail of Tears to Oklahoma Territory or, in some cases, sold to “slave catchers.”

The confrontations dubbed ” Powells Battle” fought on Jan. 15, and “Jesup’s Battle” on Jan. 24 – were named in memory of the U.S. commanding officers, Navy Gen. Thomas Jesup.

The remembrance beginning at 10a.m. on the actual anniversary date of the first battle, Jan 15 includes traditional Native American, African, and American military prayers and memorial ceremonies, historic presentations and displays, cultural vendors and live performances. It will be followed at 1p.m. by guided tours of the battlefield provided by the Loxahatchee Battlefield Preservationists.

That event takes place on the Dr. Martin Luther King Jr. holiday weekend, and specifically the Jan. 15 birth date of Dr. King, whose teachings of nonviolence, as well as the needlessness and injustice of warfare, provide a backdrop for understanding the dynamics of the two battles. The memory of those on all sides, whose lives were sacrificed on the battleground and in the aftermath, will be honored.

The commemoration of the history-making battles will continue with an Education Day on Friday, Jan. 27, when 4th and 5th graders will take a field trip to the battlefield site, where they will meet reenactors.

On Saturday, Jan. 28, beginning at 10 a.m., an actual reenactment will be held, bringing to life the drama of the two battles, with soldiers in the uniforms of the time, and Seminoles dressed in their finest, following the tradition of making the best appearance if one must die in battle.

As with the Spiritual Remembrance, the reenactment will have the advantage of making the actual lives of individuals more appreciable, rather than just abstract descriptions or dry statistics.

Both events reflect the growing awareness of previously known of Palm Beach , and its role in shaping the destiny of the nation.