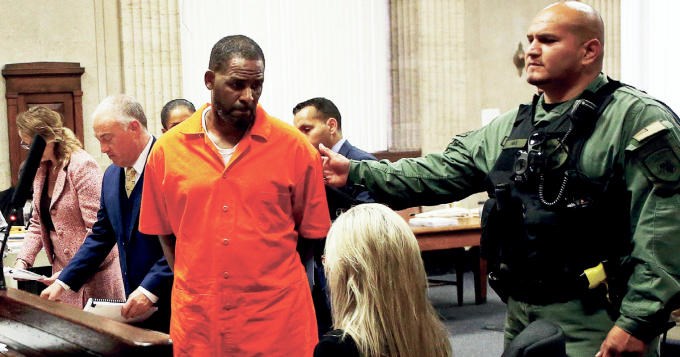 After almost twenty-ﬁve years of allegations, rumors, sex tapes, an acquittal, a docuseries, and a legacy of music that spans genres, Robert Sylvester Kelly, better known as R. Kelly, was convicted on all nine counts of sex trafﬁcking, and racketeering in a Brooklyn court room on Monday. Sentencing will take place on May 4, 2022. In a case that initially started with allegations of Kelly being the leader of a sex cult, holding young Black underage girls against their will in 2017, the guilty verdict somehow concludes one massive chapter on the downfall of major and once beloved Black entertainer. R. Kelly is a musical genius of wild proportions. His musical intellect and ability to hear notes and create music has translated into millions of dollars for record companies and the artists that he has worked with. His massive talent has earned R. Kelly three Grammys, crossover success with the theme from “Space Jam” in 1996, “I Believe I Can Fly,” and over 32 million albums sold. R. Kelly has worked with the greats in music like Jay Z, Michael Jackson, The Isley Brothers, Celine Dion, Mariah Carey, Justin Bieber, Mary J. Blige, Nick Cannon, Lady Gaga, and Chris Brown. There are over 100 artists that have collaborated with Kelly or that he has subsequently produced. R. Kelly’s music catalog encompasses the genres of: Pop (Bieber, Gaga, Dion), R&B (Brown, Jhene Aioko, Blige), Hip Hop (Migos, Ludacris, Nas, Jeezy, 2 Chainz). So, what happens to this musical legacy now?

With R. Kelly being as musically proliﬁc as he is, and a music catalog that reflects this fact, will a sex trafﬁcking conviction and the sordid details of his morally corrupt criminal enterprise that ensnared minors into pedophile activities put a lockdown on everything that he once touched. The push to discontinue the airplay of R. Kelly’s music began in 2002 when the singer/producer was accused of being the man in a bootleg video that appeared to be having intercourse with and urinating on an underage girl. Kelly was arrested that year at his Florida home and charged with 21 counts of child pornography. Yet this did not stop music artists from working with R. Kelly, and it did not deter music lovers from making his “Trapped in The Closet: Chapters 1-22” (2005) saga a multimillion seller and 3x platinum. In fact, since his initial arrest in 2002 and acquittal in 2008, Kelly released twelve albums. After the airing of the Lifetime channel’s “Surviving R. Kelly” which featured the allegations of sexual abuse and the testimonials of several of R. Kelly’s victims who also testiﬁed against him in his recent trial, the music industry began to speak. In 2019 when charges were brought against R. Kelly, a few of music’s brightest stars came forth to disassociate themselves from Kelly. Celine Dion who scored a #1 hit penned by Kelly with “I’m Your Angel” removed the song from her catalog and streaming services along with the video. That year, Chance The Rapper (Somewhere in Paradise), Lady Gaga (Do What You Want), Ciara (Next To You, Promise), and The Pussy Cat Dolls (Out of This Club) all removed songs that were produced or collaborations with R. Kelly. Lady Gaga noted in a Twitter statement regarding her decision to remove her work with Kelly: “I stand by anyone who has ever been the victim of sexual assault. I stand behind these women 1000%, believe them, know they are suffering and in pain, and feel strongly that their voices should be heard and taken seriously. I’m sorry, both for my poor judgment when I was young, and for not speaking out sooner.” Other artists decidedly withheld comment on R. Kelly and did not remove his music from their streaming services. His conviction Monday may prove to be the catalyst for many music artists to take a second look at continuing their connection with him. Perhaps the music industry itself has a day of reckoning to confront regarding R. Kelly.

The allegations that something disturbing was going on in the world of R. Kelly did not start with the video tape that was bootlegged and sold on the streets of Chicago in the late 90’s and early 2000’s. It began with the rumor of R. Kelly eloping with an underaged Aaliyah Haughton. The young starlet was Kelly’s protégé and her debut album “Age Ain’t Nothin’ But A Number” was written and produced by him for Blackground Records, a company owned by Barry Hankerson. Hankerson was Aaliyah’s uncle who at this time was married to R&B legend Gladys Knight. Unfortunately, the rumor was based in fact when a Midwest radio disc jockey discovered a marriage license ﬁled in the state of Illinois that revealed a 27-year-old R. Kelly had indeed wed a 15-year-old Aaliyah, whose age on the certiﬁcate was recorded as 18 years old. In court, witness for the prosecution Demetrius Smith, former tour manager and assistant for R. Kelly between the years of 1984 and 1996 confessed to bribing a welfare worker with $500 to obtain fake id for Aaliyah for the marriage to occur. However, in 1994, Kelly and Aaliyah denied the rumors and a year later, the marriage was annulled. Later Hankerson would confess that even though he “didn’t have a clue” about the improper relationship between his niece and Kelly but believes “my sister knew a lot more than what we thought she knew.”

While R. Kelly would go on to become the self-proclaimed “King of R&B” and Aaliyah became a star in her own right selling millions of albums and starring on the ﬁlm screen in “Romeo Must Die” and “Queen of the Damned” before dying tragically in a plane crash in 2001 at the age of 22, this dark cloud of pedophilia and sexual misconduct followed R. Kelly perpetually. To the music buying public and fans, plus to the artists who were in search of hits to start or expand their career, no one knew for sure how far or how deep the rabbit hole went in R. Kelly’s world. Not until 2017 when the parents of Joycelyn Savage and Ariel Clarey told the world that their daughters were entrapped, kidnapped, and brainwashed inside of a “sex cult” led by Kelly. Then the strange and sinister interview both young women and R. Kelly gave to Gayle King in 2019.

The picture of who the musical Pied Piper really is became clear. The evidence presented in the docuseries “Surviving R. Kelly” and the subsequent trial which ended Monday with a guilty verdict has without a shred of doubt shown R. Kelly to be a conflicted and mentally unstable individual who perpetuated criminal sexual behavior against Black women and girls. The musical legacy of R. Kelly can not be denied or silenced in totality. Music streaming services such as Spotify still streams R. Kelly’s discography. Streaming data shows that R. Kelly’s music has remained “largely steady” with 5 million to 6 million streams per week. He still shows up on other artist’s work like Drake. Drake’s “Certiﬁed Lover Boy” which was released earlier this month has an R. Kelly song playing in the background of a spoken portion of a track titled “TSU.” Drake’s producer Noah Shebib posted on Instagram that the music “has no signiﬁcance, no lyrics are present, R. Kelly’s voice isn’t even present” and that because the music is heard in the background “we were forced to license it…to think we would stand beside that guy or write with him is just incredibly disgusting.” While his music may not be played as much on the radio these days, and revenue from record sales has slowed considerably, R. Kelly still intrinsically has a musical legacy that in all its facets and complexities will be difﬁcult to ignore. Kelly’s YouTube channel has 3.5 subscribers, and there are reports that R. Kelly is selling his back catalog. In the meantime, R. Kelly is facing two more cases; one in Illinois for child pornography and obstruction, and Minnesota for a child prostitution charge. U.S. Attorney Jacquelyn Kasulis said in a press conference after the verdict “forever brands R. Kelly as a predator who used his fame and fortune to prey on the young, the vulnerable and the voiceless for his own sexual gratiﬁcation — a predator who used his inner circle to ensnare underage girls and young men and women for decades an assorted web of sex abuse, exploitation and humiliation." To the victims of R. Kelly, “your voices were heard and justice was ﬁnally served."