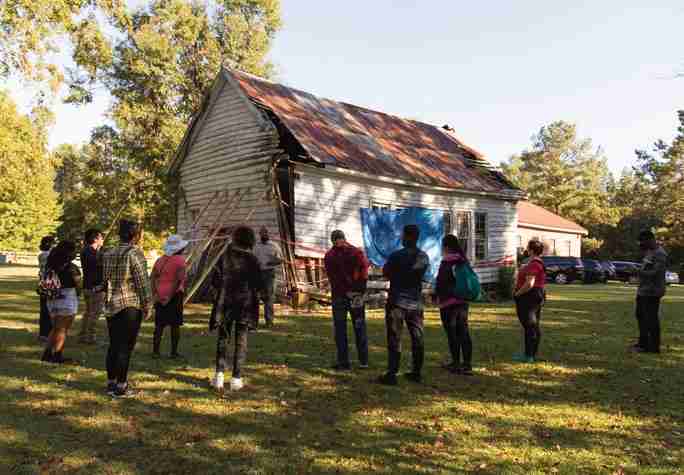 Not long after Booker T. Washington became the founding principal of Tuskegee University, on July 4, 1881, he moved the campus from a one-room schoolhouse to a 100-acre former plantation in Tuskegee, Alabama. In the years that followed, Washington worked with the Black architect Robert Robinson Taylor to build out the core buildings of the campus. Far from a simple facilities expansion, the growth of the campus mirrored the development of the curriculum. The University’s ﬁrst architecture students learned to design and build structures by building the campus itself.

“For us, when you walk on our campus, you’re actually walking into an educational curriculum,” says Kwesi Daniels, department head and associate professor of architecture at The Robert R. Taylor School of Architecture and Construction Science at Tuskegee University. “You’re not sitting inside a building to learn. The learning starts the minute you get here.”

More than a century later, that approach continues. Tuskegee architecture students today are studying the discipline of historic preservation through explorations of buildings on and near the historic HBCU campus, in part through a collaboration with the Graduate Program in Historic Preservation at the Weitzman School of Design at the University of Pennsylvania. Teaching collaborations between Penn and Tuskegee go back to a partnership established in 2019, when Tuskegee created a minor in historic preservation, and the launch of the Center for the Preservation of Civil Rights Sites (CPCRS) at Penn the following year. Tuskegee now offers two courses in preservation, which have featured a series of guest speakers from Weitzman. And it’s in the early stages of developing an undergraduate major in preservation—potentially the ﬁrst such program at an HBCU.

“Penn is able to bring people to the table that have been doing it for 30 or 40 years,” Daniels says. “The depth of knowledge they have—it allows us to understand how deep we need to go to build our program.”

Randy Mason, professor of historic preservation at Weitzman and faculty director at CPCRS, says Penn’s budding partnership with Tuskegee is part of a broader effort to bring more diverse professionals into the preservation ﬁeld, and to correct a legacy of neglect for Black spaces and communities.

For students, the growing preservation curriculum at Tuskegee opens up new professional possibilities. Jordan Lamar, a fourth-year architecture student, enrolled at Tuskegee with the intention of building a career in real estate development. At the urging of Daniels, he attended a workshop on historic window restoration hosted by the HOPE Crew, an initiative of the National Trust for Historic Preservation, which sparked an interest in hands-on preservation work. In his sophomore year, Lamar enrolled in the ﬁrst of a two-part preservation course at Tuskegee, where he met Mason and other scholars from Penn and around the country. As part of that course, he worked on a historic structures report for the John H. Drakeford House. While there wasn’t much hands-on work because of the pandemic, Lamar says it was eye-opening to realize that a report like that wasn’t just paperwork, but involved things like laser scanning and drones.

“What interested me is the different paths you can take with historic preservation,” he says.

Daniels says that when it comes to preserving Black history, Tuskegee has “a narrative no one else has.” The school is within ﬁve hours of every major Civil Rights site in the country, and within 30 minutes of many of the most signiﬁcant sites, he says. It’s also embedded in a rural place. In that way, it’s an ideal place for studying how to preserve cultural artifacts in communities all over the world that haven’t beneﬁted from traditional approaches to historic preservation. All of those things, combined with the opportunities for hands-on work, are a draw for potential preservation students, Daniels says. It’s a natural extension of the work the school has already done.

Working with a group of preservationists, including recent Tuskegee graduates, Nguyen contributed to site assessments for the First Baptist Church (Brick-a-Day) in Montgomery, a hub of Civil Rights organizing, and the Trinity Lutheran Church Parsonage, which was repeatedly bombed because of its leader’s involvement in the Civil Rights movement. More than an exercise in recording the conditions of the structures, Nguyen says, the project was concerned with ﬁnding ways for preservation to contribute to the broader uplift of disinvested parts of the city.

“It was about representing public history and Civil Rights history but also sustainable heritage conservation,” he says. “It was more than just saving the building. We were thinking about how the building can be used by the community.”

“The big opportunity is to create a blueprint at Tuskegee that can be replicated at the other six HBCUs with schools of design,” Leggs says. “We, at Penn, are thrilled about this potential and our collaboration with Tuskegee.”