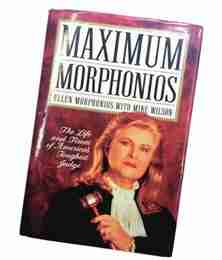 MADISON, Fla. (AP) – Dean Morphonios was the sole prosecutor in this tiny Panhandle county for nearly a decade.

He’s the son of a flamboyant Miami judge – Ellen Morphonios – but could not be more different in character and temperament.

Where his mother was bold and bawdy and bragged about her sexual conquests, he is humble, deeply religious and devoted to his wife.

Where she earned the nicknames “Maximum Morphonios” and “The Time Machine” for doling out long sentences to criminal defendants, he has a reputation for leniency and favoring probation over prison.

Where she co-wrote an autobiography and hosted a radio show for years, he prefers anonymity and declined to be interviewed.

Morphonios’ mother, who died in 2002, was no racist. Morphonios isn’t one either.

But a decade of crime data from the state’s massive Offender Based Transaction System shows that black defendants he prosecuted for felony drug crimes spent four times longer behind bars than whites on average.

That places Morphonios, who was reassigned to Lafayette County earlier this summer, among the prosecutors with the widest sentence disparities in the state.

This glaring difference in outcomes for blacks and whites is what prompted the Herald-Tribune to investigate Morphonios as part of its three-year examination of racial bias in Florida’s criminal justice system.

After the newspaper published its `Bias on the bench’ series in December 2016, some judges absolved themselves of blame.

They said if anyone is responsible for racial discrimination in the criminal justice system, it’s the prosecutors. That’s because they control the plea bargaining process where more than 95 percent of cases are settled.

Since almost all of Morphonios’ cases ended with plea deals, it makes sense to point a finger at him for the disparities in Madison County, according to the judges’ theory.

But talk to anyone at the local court house – defendants, clerical staff or defense attorneys, and they’ll tell you they admire and respect the 62-year-old assistant state attorney and doubt race influences his decision making in any way.

“He’s probably one the best prosecutors I’ve worked with,” said Mutaqee Akbar, an African-American criminal defense attorney based in Tallahassee.

But when conversation turns to Sheriff Ben Stewart and his countywide drug task force, sentiment shifts.

“The drug task force is racist. You can quote me on that,” Akbar said. “Madison is famous for racial profiling on I-10.” Akbar added that sheriff’s deputies are known for seizing cash, cars and other assets from those found breaking the law.

“They get a lot of forfeiture money,” Akbar said. “That’s all they care about.”

Stewart declined to be interviewed. He did not reply to an Aug. 6 email outlining the newspaper’s findings.

His chief deputy, Epp Richardson, was initially helpful. But he, too, stopped returning calls and emails in early August.

During a conversation earlier this summer, Richardson said forfeitures had nothing to do with the number of his office’s drug arrests.

“It’s really not a business,” he said. “It’s an enforcement action.”

To explore these issues further, the Herald-Tribune asked the 3rd Circuit Court, which includes Madison County, for all of Morphonios’ felony drug cases from 2014 through 2016.

One by one, reporters opened the more than 320 electronic files and built a database with the names of defendants, defense attorneys and arresting officers, as well as the reasons behind the arrests, the points scored by defendants under state sentencing guidelines, and the sentences they ultimately received.

Also contained in the data are a myriad of details including fines and fees imposed on defendants, whether they violated probation or were found with a gun at the time of their crime.

After analyzing this information, combing through hundreds of additional documents provided by the Madison County Clerk of Court and interviewing more than 20 lawyers, court officials, county residents, criminal defendants and legal experts, the newspaper found: -Sheriff Stewart grew his task force into one of the most productive drug busting machines in Florida – moving it from 50th in the state in per capita arrests in 2009 to third by 2015.

-The task force runs like a business. Money flows in from fines, fees, forfeitures and grants – at least $2.2 million over the past decade. It is used to purchase patrol cars, radios and other equipment. But when it comes to spending on inmates at the county jail, the sheriff is vigilant about containing expenses.

-Deputies arrest more blacks than whites – not only along the 30-mile stretch of Interstate 10 that cuts through the county but within Madison and away from the highway as well. While blacks represent less than 40 percent of the county’s population, they accounted for 60 percent of the sheriff’s felony drug busts from 2014 through 2016.

-Few felony drug defendants in Madison County – black or white – spend any time in jail or prison after their initial offense. A review of 321 defendants prosecuted by Morphonios shows that 70 percent spent no time in lockup. Only 22 received more than 30 days and all but four were black. It’s only after violating probation that drug offenders start racking up serious time behind bars.

For most felony drug offenders, the harshest punishment is monetary. Convicted black defendants leave court owing an average of about $1,700, while whites owe about $1,300. If they don’t pay on time, the sheriff issues a warrant for their arrest, leading to more fines and fees.