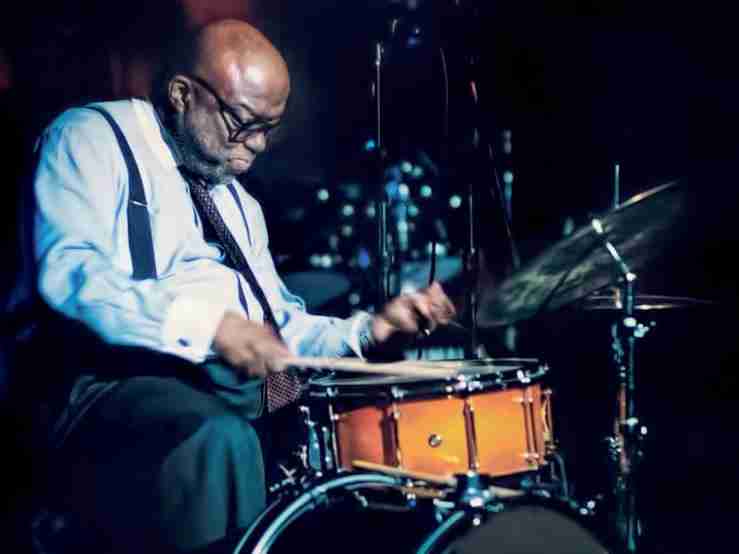 New York (AP) – Stanley Crouch, a contentious and influential critic, columnist and self-taught Renaissance man who in ﬁction and nonﬁction was inspired by his knowledge and love of blues and jazz and his impulse to step over the line, died Wednesday at age 74.

His wife, Gloria Nixon-Crouch, told The Associated Press that he died at a hospice in New York City. He had been in poor health in recent years after suffering a stroke.

In a career dating back to the 1960s, Crouch was a columnist for the Village Voice and the New York Daily News, a guest on NPR and Charlie Rose’s show, a jazz drummer, a founder of what became Jazz at Lincoln Center and mentor to Wynton Marsalis and many younger writers and musicians, an aﬁcionado of baseball and American folklore and scourge of Toni Morrison, Spike Lee and Amira Baraka among others.

At home, he read, wrote and listened to music. Away from home, he might turn up anywhere – dining with then-Vice President Al Gore, chatting up musicians at the Village Vanguard or making a special appearance at a ceremony for the National Board of Review awards, when he accepted a prize on behalf of Quentin Tarantino, who appreciated Crouch’s praise for “Pulp Fiction.”

He was also a favorite of documentary maker Ken Burns, his commentary appearing in “Jazz” and “The Civil War” among other ﬁlms.

Crouch’s work was ever a blend of high art and street talk, the prose version of what he considered the profound democracy of jazz. He saw his country, his work and his life as intertwined, advancing “through argument, through contradiction, through reinterpretation,” grounded and graced by a spirit of “tragic optimism.” In his 2007 biography of Charlie Parker, “Kansas City Lightning,” he presents the great saxophonist in his early days as not just a revolutionary musician, but a kind of exemplary citizen.

“The 21-year-old Parker was possessed by his music – by a ravenous need to improvise, to learn new tunes, to ﬁnd new ways of getting through the harmonies with materials that would liberate him from cliches,” Crouch wrote. “Parker seemed to have a crying soul, a spirit as troubled by the nature of life as it was capable of almost unlimited celebration.” Crouch championed new ideas, but was deeply immersed in the past and in some ways preferred it – scorning fusion and other more recent incarnations of jazz, to the point where he and Marsalis were criticized for unduly shaping Burns’ jazz documentary, and identifying with the term “Negro” over African American.

A deep-voiced, bulky man who once slapped the face of a reviewer who had panned his novel “Don’t the Moon Look Lonesome,” he was equally emphatic whether rhapsodizing over Duke Ellington or Charlie Parker, disparaging gangsta rap (“’Birth of a Nation’ with a backbeat”) or admiring Barack Obama (“a rhythm and blues guy”).

Warm words from Crouch were savored if only for the ferocity, even extremity, of his scorn. He called Lee a “middle-class would-be street Negro” and Morrison a writer “perforated by ideology,” turning out “bathtub corn liquor.” He and Baraka so despised each other that when New Yorker writer Robert Boynton called Baraka for a story on Crouch in 1995, the poet called Crouch ”a backwards, asinine person” and hung up the phone.

“Crouch has a virtually insatiable appetite for controversy,” Boynton wrote.

Crouch’s criticism was collected into “Notes of a Hanging Judge,” “The AllAmerican Skin Game” and other books. He had been working on a second Parker volume, but could not complete it because of his health. His honors included a Whiting Award, the WindhamCampbell Prize and being named a Jazz Master in 2019 by the National Endowment for the Arts. He was a visiting professor at Columbia University and president of the Louis Armstrong Educational Foundation.

Crouch is survived by his wife, a daughter and granddaughter.

Asmathic and often in poor health as a child, Crouch was raised in Los Angeles by his mother and was eager to learn about new worlds, reading William Faulkner, Mark Twain and other canonical writers and teaching himself how to drum.

He was a civil rights activist in the 1960s who was radicalized by the 1965 Watts riots but later turned against Black nationalism. Crouch became an heir to the intellectual tradition of such fellow Black writers as Ralph Ellison and Albert Murray, advocating the spontaneity and inclusiveness of jazz as the ﬁnest qualities of “this crazy quilt called America.”

“That is the essence of jazz in all its styles and is the continuing essence of Americana when lived to its most potent vitality,” he wrote, “the top and the bottom mixed into a seamless liquidity of many flavors, all recognized for the light of their deeply human sources.”

Previous post Who are the women of Jazz? Spady knows