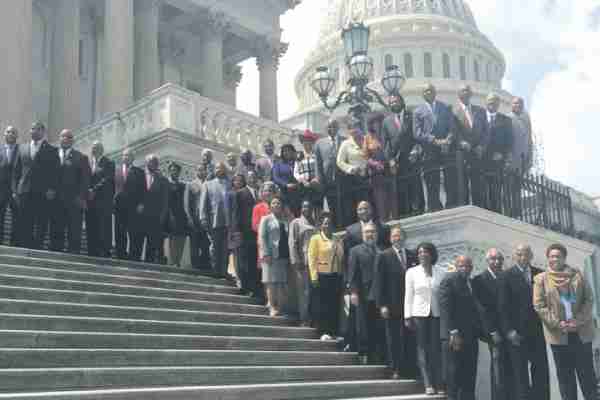 On the very day that Michael Brown, the slain teenager from Ferguson, Mo., was buried, the Congressional Black Caucus made a major announcement. They sent a letter complaining to President Barack Obama. Yep, you heard correctly. They took the bold move of asking the president to investigate issues of racism and discrimination within local law enforcement nationally by setting up a police czar.

Now that you have finished laughing, let’s discuss this a little further.

It took plodding through the CBC’s meandering letter, to see that they made a few strong recommendations to the president. They first want Obama to appoint the “Department of Justice (DOJ) to train every police department in the country on the issue of racial bias.”

It’s amazing that members of Congress need to be reminded that policing is a local issue, not a federal one. The federal government has its hands full trying to eradicate racism from its own ranks. So I have a recommendation for the CBC: Let the states and municipal governments deal with the issue on the local level.

The second recommendation concerned accountability. According to the CBC’s letter, “Police departments should not be solely responsible for investigating themselves.”

The third recommendation deals with the issue of diversity. “Police department personnel should be representative of the communities they serve … DOJ must set, implement, and monitor diversity hiring and retention guidelines for local police departments,” according to the letter.

Again, this is a local issue and DOJ has no authority to engage in such an activity. Why won’t Congress agree to be subjected to this same standard? Besides, Congress conveniently exempts itself from some of the law it passes.

The fourth recommendation revolved around engagement. “Too often law enforcement personnel hold stereotypes about black and brown youth and vice versa. Lack of familiarity breeds lack of understanding and increased opportunities for conflict…”

These same members of Congress perpetuate stereotypes that Republicans hate blacks and don’t care about the poor. Democrats rarely engage with Republicans on any issues; and people wonder why no legislation gets passed in Washington, D.C.

Is anyone listening? This is a local issue.

In essence, the CBC wants to nationalize all local and municipal police departments. This is yet another example of why no one takes the CBC seriously. They constantly advocate positions that have no chance of passing Congress; and in this case, are not even legal.

Did the CBC really just realize that racial disparities on the Ferguson police force existed? I was born and raised in St. Louis and these disparities have existed for decades in Ferguson and throughout the region. The federal government has absolutely no role in insuring diversity on a local police force. That is the responsibility of the locally elected leadership.

Local police should answer to the citizens they are sworn to serve and protect, not to Eric Holder or the CBC. The CBC conveniently ignore that blacks are 67 percent of the population of Ferguson; but they rarely participate in elections in any meaningful way. Are the blacks in Ferguson just realizing that there were only three blacks out of 53 on the police force? Maybe blacks are fine with the composition of the police force and the rest of their elected officials. If they were dissatisfied, they could have quickly changed that by voting.

The CBC has chosen to put the blame and responsibility for Ferguson on everyone but the citizens of Ferguson. Whose fault is it that blacks don’t vote in Ferguson? They have the power to vote, but they don’t have the will to vote. They hold the key to their own future.

Raynard Jackson is president & CEO of Raynard Jackson & Associates LLC., a Washington, D.C.-based public relations/government affairs firm. He can be reached through his Web site, raynardjackson.com. You can also follow him on Twitter @raynard1223

Previous post The decline of teachers of African descent must stop