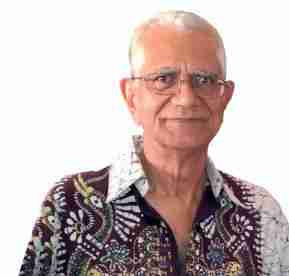 Even before Bill Clinton’s chief strategist James Carville proclaimed, “It’s the economy, stupid,” in 1991, it was already known that Americans vote their pocketbooks. It is not surprising, therefore, that polls are showing that, in the upcoming mid-term elections, high food and gas prices matter most for voters, even though most probably do not know much about how inflation and the economy, in general, work.

Such an attitude is understandable during normal times but these are not normal times and, while prices will inevitably decline, the outcome of the Nov. 8 vote will have a lasting impact on, among other things, the future of democracy and the right to have an abortion. Abraham Lincoln is not on the ballot, but his assertion 160 years ago is: “Democracy is direct self-government, over all the people, by all the people, for all the people.”

What also makes these times unusual is that, while there is discontent over inflation, Republican candidates are not offering policies to lower costs; the candidacies of most of them are propped up by former President Donald Trump, who demands total fealty not to any ideology but to his discredited claim of election fraud. Loyalty to the maximum leader has already produced some astonishing elected ofﬁcials and candidates.

More than 240 of 370 Republican candidates “are still casting doubt on the presidential election this year — many of them within the last couple of months,” The New York Times reported. Those candidates “represent a sentiment that is spreading in the Republican Party, rupturing a bedrock principle of democracy: that voters decide elections and candidates accept results. This skepticism has stretched into political races in every state and is still frequently being raised as a campaign issue,” The Times said, adding, “Hundreds of these candidates are favored to win their races.”

Those candidates include several “running for state ofﬁces that can play a signiﬁcant role in elections and recounts — governors, attorneys general and secretaries of state” and several are expected to win. “For Republican candidates who would rather talk about something other than the last presidential election, some have learned that the party’s base, and its unofﬁcial leader, Mr. Trump, won’t let them drop the issue. It has become, in many cases, the price of entry to the Republican ticket.”

Besides allegiance to “Trumpism,” some of the ofﬁcials already elected have been waging a cultural war which can be expected to widen. Several states have enacted laws censoring what can be taught in classrooms, such as sex and gender identity and slavery, leading to banning of books in school and public libraries; silencing criticism; and usurping the power of local governments. Some states have enacted a bounty system to enforce such policies.

In Texas, Senate Bill 8 (SB-8) empowers private citizens to sue anyone they suspect of helping a pregnant person get an abortion and receive a bounty of up to $10,000 in damages, Mother Jones reported. Similar laws “now reach into school bathrooms, classrooms, and sports, targeting both the rights of transgender and LGBTQ people and what is taught,” the report said.

Several other states have also enacted similar “vigilante enforcement mechanism” or are considering doing so. Since January 2021,192 bills in 40 states “have sought to limit classroom instruction on gender, sexual orientation, race, and American history,” Mother Jones said, citing data from PEN America. Forty-six of those laws would be enforced by private individuals.

“These laws do not stop at targeting society’s most vulnerable. They also attack the legal and social norms that underpin our system of government,” Mother Jones said. “They turn citizens into spies in a surveillance scheme more reminiscent of a totalitarian state and shred the vital principle that the laws are applied equally to all people.”

Slave-owners used such bounty hunting to go after Africans making a bid for freedom. “As in 1850, the carrot is money, and the stick is fear. For more than a century after the Fugitive Slave Law, vigilantes enforced racial hierarchy through violence while lawmakers looked the other way. With rules like SB8, vigilantes are now again ofﬁcially welcomed in the letter of the law,” Mother Jones said.

Apart from the culture war, an ideological onslaught can be expected if Republicans gain power. Florida Senator Rick Scott and House Minority Leader Kevin McCarthy of California are promising to weaken or entirely scrap Social Security and Medicare/Medicaid. That would be a ﬁrst step to dismantling the social safety net that barely sustains the nation’s most vulnerable citizens, many of them not “white.” And, if it comes to that, an ascendant Republican Party can aways seek support from the Supreme Court, whose 6-3 conservative majority journalist Elie Mystal has dubbed a “Supreme Hexumvirate,” that is already playing the ideological game.

Still, a New York Times/Siena College poll found that, while 71 percent of voters polled believe democracy is at risk, only seven percent “think it is the most important problem facing the country.” They are more concerned about the economy than to “fears about the fate of the country’s political system,” The Times said.

That is another way of saying that the Republicans are poised to take control of the House and, probably, the Senate with their contention that, whatever else may matter, “it’s the economy, stupid,” and that Democrats are to blame, regardless of President Joe Biden’s accomplishments in his ﬁrst two years in ofﬁce in the face of relentless Republican obstructionism. And, with the initial outrage over the Supreme Court’s overturning of Roe v. Wade on June 24 apparently fading, less than 10 percent of voters see abortion as a priority, though, curiously, an overwhelming majority want it to be available.

Voters must know that, when inflation eases, as it will, a Republican takeover will mean life under at least a budding autocracy which will bloom fully if Trump wins in 2024 and women and girls will have to bear children they do not want or cannot afford to raise, creating, for many, a different, more lasting economic hardship. It is a choice between short-term pain and long-term gain.

As the choice is being made, it is good to bear in mind this reminder from the merchant Abdel Wahab in the Kuwaiti serial “Mohammed Ali Road” that is streaming on Netflix: “When the tent pole collapses, it falls down on all who are inside it.”