Andrew Young still leading at 90, and peace is still the way 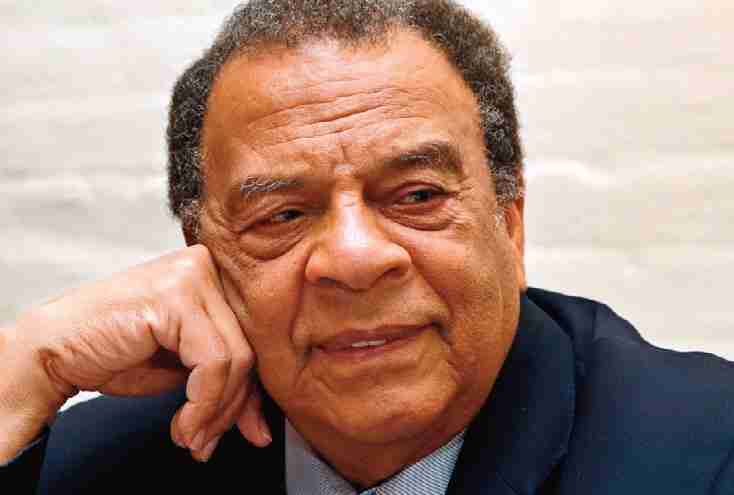 The former Atlanta mayor told the crowd he wanted a “quiet, prayerful march for peace.” Young was instrumental in bringing the Summer Olympics to Atlanta in 1996, and Centennial Park is a legacy of those games.

Young became the ﬁrst Black person from Georgia sent to Congress since Reconstruction when he was elected to the U.S. House in 1972. President Jimmy Carter later appointed him ambassador to the United Nations, where he served until his resignation in 1979 amid public uproar over a private meeting with members of the Palestine Liberation Organization.

“Peace is more powerful the more it is silent,” he said. “That does not mean you do nothing, but it means that we communicate with a universal spirit of peace that is the creator of heaven and Earth when we speak from within, not from our lips, but from our hearts, from our minds.”

He said Atlanta has become one of the world’s greatest cities because of leaders such as his late friend and colleague the Rev. Martin Luther King Jr. and former Mayor Ivan Allen Jr.

“Many of these leaders decided quietly that the way to peace would be called the Atlanta Way,” he said. “We don’t fuss, we don’t ﬁght, we don’t argue. We sit together, we reason together, we pray together to ﬁnd a common solution which is for the beneﬁt of all humankind.” Young is among the last surviving members of King’s inner circle. He turned 90 on Saturday and was hosting multiple birthday events that showcase his accomplishments and continue his long ﬁght for equity and inclusion.

“Andrew Young is one of those legends,” said Kurt Schmitz, a Georgia State University instructor who came to the walk. “You try to ﬁnd those opportunities to appreciate folks that have made a big difference over a long period of time, and Andrew Young is one of those guys.” Phillip Finley, 57, said Young’s example was important to young people today as they grapple with voter suppression and other issues Young faced.

“The next generation has to understand what this man did for civil rights – not just for African Americans – for Asian Americans, for Hispanics, for all people of color,” he said.

The walk went up a boulevard named for Young and wrapped around Mercedes-Benz Stadium, where the Falcons play. It ended in a nearby park, where King’s daughter, Bernice King, delivered a prayer before organizers unveiled a statue of Young.

The walk was the second of multiple events planned for Young’s 90th birthday, which was organized around the theme, “peace and reconciliation.” On Wednesday, Young delivered a sermon at his church in Atlanta in which he lamented the war in Ukraine and “rancor” in the world but also expressed hope for peace.

On Friday, an exhibit about Young’s life opened at Millennium Gate Museum, also in Atlanta. A gala scheduled the next day raised money for his foundation, which works on economic development and food security projects.

Young served as executive director of the Southern Christian Leadership Conference, the civil rights group that King founded, and was with King when he was assassinated in 1968 at the age of 39. He said he still turns to his late friend and colleague King for inspiration.

During the civil rights struggle, King would say that “’we probably won’t make it to 50,”’ Young recalled in a January opinion column in The Atlanta Journal Constitution. “’But those who do have got to make sure to make it to 100, because there’s a whole lot of work to be done.”’

Young has acknowledged thinking about death as he approaches 90. On a podcast in January, he told former Obama administration strategist David Axelrod that King would often talk – and joke – about death, which King called the “ultimate democracy.”

“He said, ‘You don’t have anything to say about where you die or how you die,”’ Young said. “’Your only choice is what is it you’re willing to give your life for.”’