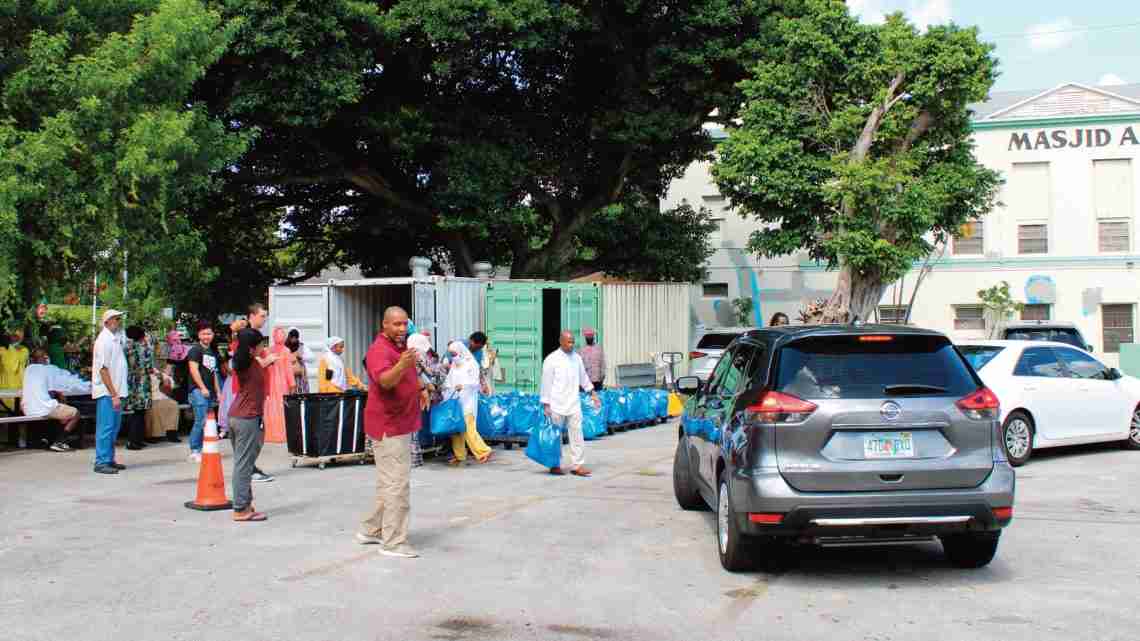 Miami, Fla. – Members of Miami’s most historic mosque celebrated the spirit of Ibrahim, or Abraham, with a communal food giveaway Saturday that happened to fall on the Eid holiday that commemorates the annual Hajj or pilgrimage to the holy city Mecca in Arabia.

Eid also is a time when Muslims around the world give extra praise to their Creator, and provide more help to those who are struggling financially or otherwise having a hard time.

The Masjid Al Ansar Food Pantry Committee long has hosted their food giveaway, usually on the second and fourth Saturday of the month, serving approximately 30-40 families before the COVID-19 pandemic, and almost 100 families since, on the mosque’s parking lot in Liberty City. High school students earn community service hours.

With so many volunteer hands available Saturday morning following the Muslims’ traditional Eid prayer, including some who have completed the Hajj, the food bags were prepared fast and placed outside the onsite food container.

Some guests arrived early, on foot or with their wheeled baskets, to get their colorful blue food bag. Cars with open trunks semi-circled the parking lot as the bags were passed out.

In contrast with the Eid holiday that marks the end of the Muslim fasting month of Ramadan, this time of year commemorates the interfaith forefather Abraham and his great sacrifice that transmuted from the life of his son Ishmael to a lamb.

Even if some recipients can later be found down the street selling their food, the givers consider it is not their duty to judge others’ situations. Maybe the recipients need money for something other than food, such as medicine or bus fare. The universal idea, common to the Abrahamic and other faiths, is to give without attachment to the blessing. The latter falls to the Creator, the ultimate judge of hearts.

Catering to the needs of the underprivileged is a duty and obligation for Muslims and other people of sincere faith. It is described in the Qur’an as a right of the needy; not a favor on the part of the giver, but an obligation and responsibility owed the community, whose fulfilment Allah (God) rewards.

"I think Masjid Al-Ansar is providing a much needed service to the community,” said volunteer Fern Mateen, “especially during these days of increasing food prices."

Donations to the Masjid Al Ansar Food Pantry can be made via Paypal: www.paypal.me/AlAnsarFoodPantry Zelle: muslimeducatorsassociation@gmail.com or Cash App: $ALANSARFOODPANTRY