You are the salt of the earth 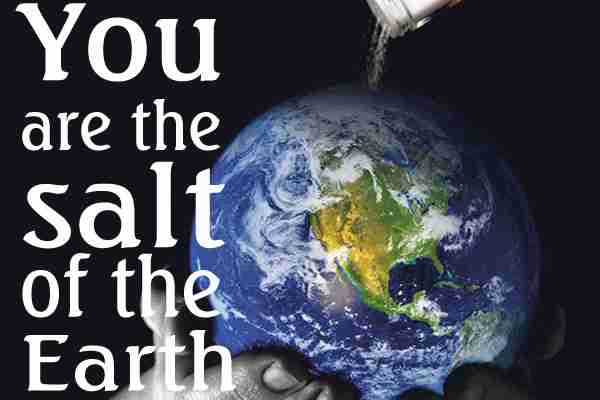 Let me tell you why you are here. You’re here to be salt-seasoning that brings out the God-flavors of this earth. If you lose your saltiness, how will people taste godliness? You’ve lost your usefulness and will end up in the garbage. – Matthew 5:13 (The Message Bible)

I was sitting in Henry’s Dry Cleaners in West Perrine talking to the owner when she walked in. She was a short, attractive, neatly dressed young adult. What captured my attention more than her neat appearance was that she was dressed like a man and her jeans were dangling well below her waist so much that her underpants (men’s drawers) were intentionally showing.

She had to notice the puzzled look on my face because she gave me that hard look that questioned my questioning gaze. I abruptly asked her, “Where do you attend church?” My question caught her off guard because, I suspect, she thought I wanted to address her masculine dress and behavior.

She said she wasn’t attending church like she should but that she knew it was right to honor the Lord, attend church, pay tithes, read her Bible and pray.

The conversation didn’t last long but I knew I made an impression on her. She pulled her jeans up and promised me, with a smile, that she would try to do better by God. I did not verbally judge her but I wanted to influence her for God’s sake. After all, that’s why we are here living at this time in history: to be salt in a bland world.

With society becoming more tolerant of ungodly behavior, more susceptible to violence, more lackadaisical about the persistence of racial prejudice and more corrupt in business and politics, there is a need for the righteous to bring seasoning to this distasteful world.

‘We are here living at this time in history to be salt in a bland world.  With society becoming more tolerant of ungodly behavior, more susceptible to violence, more lackadaisical about the persistence of racial prejudice and more corrupt in business and politics, there is a need for the righteous to bring seasoning to this distasteful world.’

But there is a horrifying new trend today. Christian pollster George Barna says that research shows “… the average Christian in the average church is almost indistinguishable from the rest of society. The fundamental moral and ethical difference that Christ can make in how we live is missing. When our teens we claim to be saved get pregnant and do drugs at the same rate as the general teenage population – when the marriages of Christians end in divorce at the same rate as the rest of society – when Christians cheat in business at the same statistical level as those who say they are not Christians – something is horribly wrong.”

So, who’s influencing whom?

In Jesus’ most famous sermon, the Sermon on the Mount, He advises His disciples that they are the influencers of the world, the world-changers, the game-changers. He calls them the “salt of the earth.”

And in the words of Rebecca Manley Pippert, author of Out of the Salt Shaker, Jesus challenges us not to lose our saltiness.

“This means – among other things – that we are to be active in the world as His representatives,” she wrote. “We are to get out of the saltshaker and into life itself – not to be trodden down but to be zestful witnesses to Jesus as Lord and Savior, as the one who alone gives life and meaning to a dying world.”

The analogy of salt is brilliant, for salt has a preserving ability. Salt actually wards off rot and decay. In the country, farmers rub salt into the meat of slaughtered animals to preserve it. Salt also has a penetrating ability. Salt penetrates and infiltrates almost everything it touches. It’s an aggressive substance.

Salt also has a purifying capacity. In the Bible, Elisha cleansed the waters of Jericho with the use of salt. Salt generally has a pleasing ability. Salt brings out the best in food by adding flavor to it.

Lord, keep us salty for you.

Next post Be kind to neighbors when you are sick