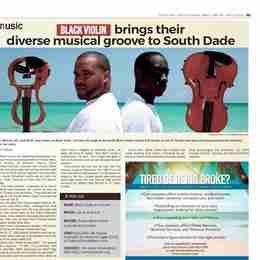 The well-traveled musicians from South Florida have traveled the nation as well as from “Dubai to South Africa.” They will take the stage at the South Miami Dade Cultural Arts Center on July 8.

The men said their career began after an en- counter with Alicia Keys’ management that had them onstage with the pop princess less than two weeks later at the 2004 Billboard Awards. A few months following that performance, their win at New York’s famed Apollo Theater sealed their fate.

“After that, it kinda snow-balled,” Wil said in a 2010 South Florida Times interview.

The 6’ 2”, 260 pound Sylvester said an en- counter with a woman in an elevator led to the title of the duo’s latest CD.

Sylvester said he explained that while he does have a degree in classical music, he plays all kinds of styles. “She didn’t mean it maliciously,” he said, “but I hope she gets to see us in concert and we can change her perception.”

Encounters like the one he had with the woman inspired Sylvester and Will B to call their new album Stereotypes. It’s the latest release by the duo, whose seeds were planted years ago when the two met as high school students at Dillard High School in Ft. Lauderdale. Since then, Black Violin has traveled the world sharing their talent, including an ad- 6/27/16 5:12 PM Page 1 dress at Florida International University, where they encouraged the audience to “think outside the box,” during a 20-minute TEDxFIU session.