Macy is infectiously fun on “Ruby” 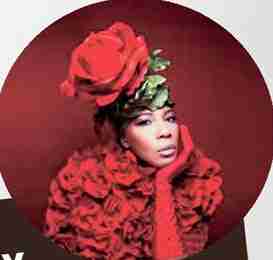 Macy Gray sounds mainly joyful and enthusiastic on “Ruby” and the zest evident across her 10th album, even when the theme is misfortune or heartbreak, is infectious. Her trademark jazzy soul and R&B foundations are accounted for, but the arrangements have a deceptively light touch and let Gray’s vocals and effervescent personality shine through.

Opener “Buddha” features a guitar solo by Gary Clark Jr. and background vocals with a gospel feel, alternating an uplifting refrain of being “alright now” with the knowing “our days are numbered.”

The ultra-romantic “Over You” – “I haven’t had a drink since my last one/No clouds in my sky but I’m on one” – has a dynamic horn arrangement and a catchy refrain and sounds most like her early hits. It’s followed by “White Man” – no extra credit for guessing who Gray is singing about – whose hatred, judgment and offensive chatter may end up hurting him.

“Sugar Daddy” is a bubbly collaboration with Meghan Trainor, whose influence is evident already on the piano introduction and cooing backing vocals, while “When It Ends” is all drama underpinned by a slinky bass line.

“But He Loves Me” is such a plausible description of when our instinct for self-preservation fails us that it sounds almost like a parody, while reggae-tinged closer “Witness” is among the album’s musical peaks.

Producers Johan Carlsson, Tommy Brown and Tommy (Lumpkins) Parker may have helped boost Gray’s confidence and “Ruby” is a sure-footed album set in a mischievous heart of gold.