Alexander star is more than a gifted artist, he’s an extraordinary human being 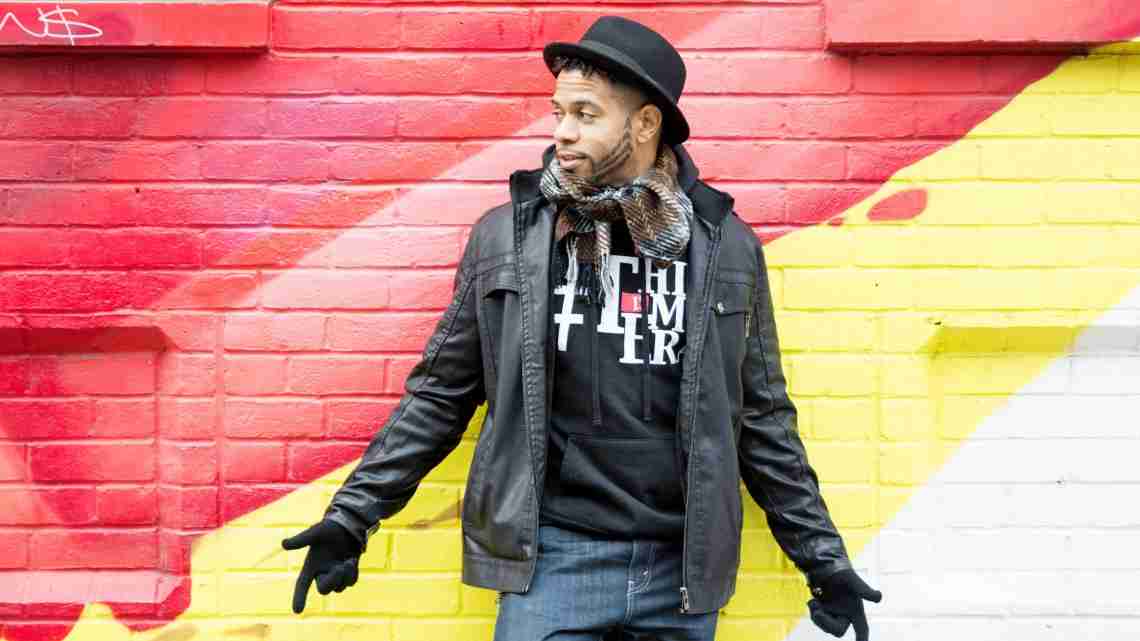 Alexander Star has the right name. After witnessing his artistry and having what was supposed to be a 30-minute interview turn into one triple the length, I’m convinced he is greatly gifted and it’s only a matter of time before the world finds out just how much.

As the son of Dr. Michael Caldwell – a celebrated concert pianist and former U.S. artistic ambassador – it’s no surprise Star is a multi-talented music entrepreneur with the intelligence to match.

He is a dedicated father to his five-year-old son Zion, an avid philanthropist, a songwriting instructor for at-risk, inner city youth and chief brand ambassador for AFR clothing – a social entrepreneurship fashion brand that donates 20 percent of its profit to educate underprivileged kids in Africa.

Overall, Star is a man on a mission. He’s determined to change the music industry, and ultimately the world, by encouraging people to stand on a higher moral ground.

“I go against the grain by nature because that’s what I do best. I want to change the grain of the music industry and how people feel they should be writing records,” Star told the South Florida Times. “My goal is to be that artist who stands up tall enough for other people with good hearts to see that the good guys do win. I want to be that good guy who wins. It’s not enough good guys winning.” 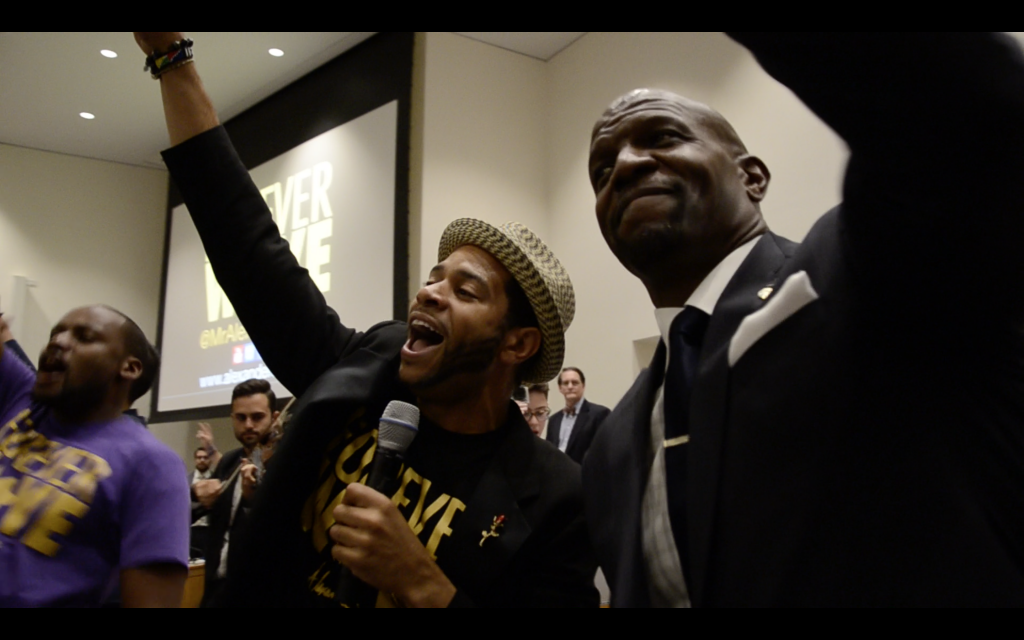 Terry Crews, right, jumped on stage with Alexander Star, center, and Kida Biza, far left, during the “This Is My Era” Tour at the United Nations in 2015.

With self-described music in his genes, Star said he’s been crafting rhymes since he learned how to write.

Throughout elementary and middle school, Star sang in chorus and became a battle rapper. He moved to Florida in 2002 before starting his junior year of high school and was discovered freestyling on a basketball court by Johnny Mars.

Mars took him to a studio where he met two other young men who would eventually become his band-mates in The Free Agents Music Group.

The group experienced tremendous local success and even caught the attention of a NBA player who’d just started a record label – but a few years later, due to the business side of things not moving as planned, Star decided to do something different.

“I was convinced before we could be a strong group, we had to be strong individuals,” Star said.

He went back to school, earning associates and bachelor’s degrees in Radio and TV Broadcasting and Communications from Broward Community College and Nova Southeastern University (NSU), respectively. Star was a ‘straight A’ student, often incorporating his gift for music into his assignments.

“I went back to school and that’s when I figured out who I am as an artist. I stepped back and I asked myself, ‘What do I write about when nobody else is around,’” Star said.

At that point, The Free Agents were on an indefinite hiatus and Star began making music he would be proud of. Initially, he was going to keep his music to himself because he didn’t think people wanted to hear music with a message.

One of his mentors, Lex Kelly, convinced him otherwise. In 2008, Star entered a talent show and won it by a landslide with an original acapella song.

He began writing music that was deeply personal to him and conveyed his worldview. Topics included: living daily with Type 1 Diabetes, encouraging women to value themselves, etc. His music was free of profanity and able to be played in church settings.

“I wrote what I wanted to write instead of writing what I thought people wanted to hear,” Star said. “Because my music was conscious and very proverbial … people thought I was a gospel artist.” 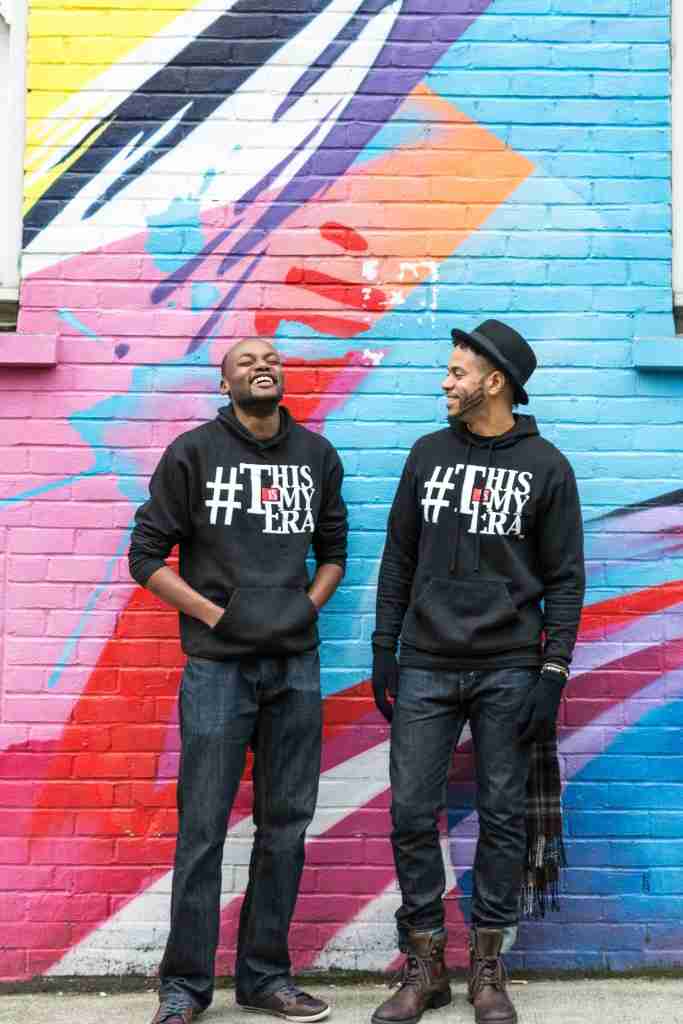 Star spent a couple summers in Atlanta with K. Eastwood, a friend from high school, and the duo recorded his first album, “No Hype, Just Hope.” He debuted it in 2010 during a homecoming concert, where he gave away free copies.

This led to Star meeting Kuda Biza, the founder of AFR clothing who would become an integral part of his journey. According to Star, Biza had received his album from a co-worker and one of the lyrics mentioned Zimbabwe, where Biza is from. Biza was so impressed, he arranged a meeting with Star.

“It’s a testimony to how God works. … I didn’t know anybody from Zimbabwe. I was just looking for countries that rhymed with the long ‘a’ sound,” Star said.

Biza talked to Star about collaborating and they began working together to make an impact in the U.S., Africa and abroad.

The duo joined forces to expand the reach of AFR Clothing and eventually kicked off the “This Is My Era” movement, an out-growth of a song Star had written in 2011 by the same name.

“This Is My Era is a declaration stating that you understand and that you’re meant to do something here that everyone will feel the impact of and remember,” Star said. “This Is My Era is saying that 200 years from now people will be reading about me in their school textbooks for what I contributed to mankind.”

Star and Biza set up a fashion show and concert at Florida Atlantic University (FAU) and realized the movement resonated strongly with students. As a result, they were booked at more schools and even inspired students to become social entrepreneurs.

We realized ‘This Is My Era’ was much more than a song. So we built a platform for the movement,” Star said. “We were doing music with a message and fashion with a purpose … we’re not just out here trying to get famous or blow our brand up. We’re doing this not just for ourselves, we’re doing it for other people.”

In 2013, Star and Biza launched the Imani Hope Foundation, the official non-profit arm to AFR Clothing that would allow them to partner with organizations in Africa to select the students they would grant the scholarships from AFR’s proceeds to.

Star said Kuda is an instrumental part of his brand and has added priceless value to his life.

“Kuda has been so much more than just AFR clothing. Kuda has invested hands-on in my growth professionally and artistically as Alexander Star,” he said.

Together, Star and Biza have done tours in the United Kingdom, Canada and been invited to perform at the United Nations. Star has also released several albums, EPs and singles as well done theme songs, hosted workshops, performed at various venues and more.

Today, Star is making international waves by being himself on one of France’s most popular reality television shows “Les Anges 9.” The current season was filmed in Miami and airs Mondays on the French TV Network NRJ12. Though shown in France, the show releases each episode on its official YouTube channel, Les Anges – La chaîne officielle, a week after it airs.

On the show, Star serves as a vocal production specialist that provides vocal training and feedback to the shows stars, who are each trying to prove they can do what it takes to make it.

Initially, Star was tasked with doing the music and theme song for the show, but after the producers met him they invited him to appear on-screen. He will perform his song “Pass the Good Vibes Around” (also the show’s theme song) on an upcoming episode and be showcased in his role as a songwriting instructor for inner city kids at The Motivational Edge.

“The entire span of my career is being showcased on this primetime television show in France. … I’ve been getting all these tweets and follows from France. I had to Google Translate everything! I’m getting messages that say, ‘Marry me,’” Star laughed.

Star is also gearing up to release a new project and perform at the upcoming A.C.T Festival, which will be held from 12 p.m. to 3 p.m. in Pembroke Pines on April 29.

“My guy AXR The Alchemist and I were commissioned with composing the original theme song for the City of Pembroke Pines. It’s called ‘Atmosphere.’ We will do a 15-minute set with a live band (and debut the song),” Star said.

His goal is to continue taking a stance against ratchet music and show artists they can attain success without submitting to the status quo.

“I desire to have a long standing career with strings of hit records, number one records that prove to the world that you can make hit music without being ignorant or reckless or degrading women,” Star said. 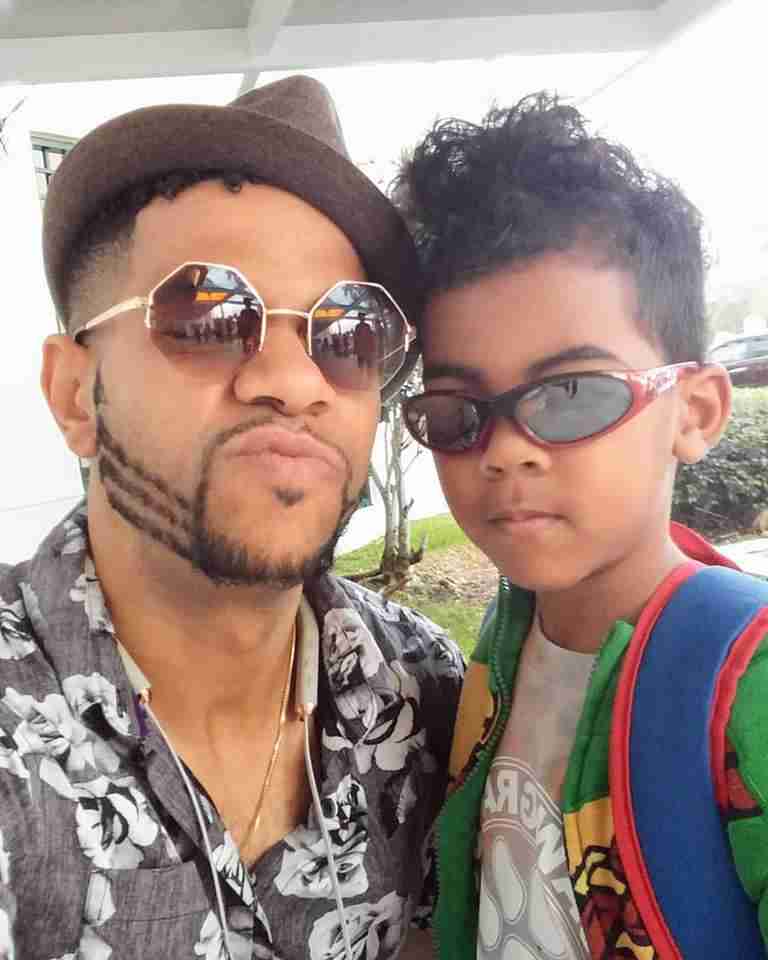 As a man of faith, Star believes that God is rewarding his persistence in not accepting deals and offers that go against who he is and what he believes.

“Little by little He (God) is showing me the persistence I’ve had … people are noticing,” Star said. “The reason why we’re all put here is to see what kind of impact we’re going to make. … That’s why I do what I do the way that I do it; because I’m aware that I’m making ripples and I’m cognizant of the type of ripples that I desire to make.”

He is committed to pleasing the Lord by walking in his unique purpose. “The Bible says when you set your hands to do work unless God is in it it’s going to fail. Therefore, I write my music and I set my career forward not to please myself, not to please other people, but to please God because I got my gifts from Him and if I use my gifts for anything but Him, I feel I would be doing myself and this world and God an injustice,” Star said.

Humorous yet sincere; gifted yet humble – there are so many levels to Alexander Star.

And while he wears many hats, the one Star is most in love with is being a father.

“Zion amplified what I was doing and my purpose for doing it. If there was any shimmer of me doing this as a hobby, that’s out the window,” Star said. “I immediately got this sense of, if we’re not accomplishing something, I could be with Zion. If I’m not working, I want to be with Zion. He is my reason to really take this seriously as a career … I love doing that, but I have someone to do it for now.”