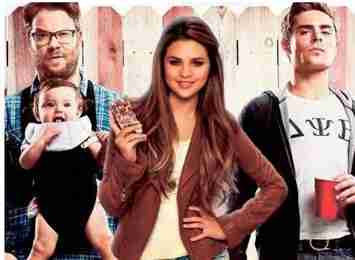 In Andrew Jay Cohen, Brendan O’Brien, Nicholas Stoller, Seth Rogen, and Evan Goldberg’s script, the poor Radners (played by Seth Rogen and Rose Byrne) just can’t get a break. After the fiasco of living next door to a fraternity in the first film and their impending new addition to their family, to sell their house and move to a bigger house with no neighbors. Sadly, they have the misfortune of a sorority moving in next door.

This sorority’s only premise is to have parties where frat boys don’t marginalize them as sexual objects. Apparently, there’s a rule that sororities are not allowed to have their own parties with alcohol (if they are operating under the umbrella of an educational institution). fun parties. So, Shelby (Chloe Grace Moretz), Beth (Kiersey Clemons), and Nora (Beanie Feldstein) decide to create their own sorority (Kappa Nu) so that they can party, smoke weed, and not be treated like sex slaves without adult supervision.

Unfortunately for the Radners, they’re in a thirty day escrow process and realize the couple (played by Sam Richardson and Abbi Jacobson) who wants to buy their house will forfeit if they find out a sorority lives next door. Houses for Greek organizations tend to bring down a neighborhood’s value because of wild parties and behavior.

Conversely, the ladies of Kappa Nu struggle to keep their identity, maintain their friendship and make enough money for rent every month. Since the wants of both groups create tension between them, they declare war on each other; just like the previous film.

Directed by Stoller, Sorority Rising is a carbon copy of the first film, replete with Zac Efron and his toned body as Teddy, who plays a major role in the partying and the hijinks. It also veers into the ridiculous and offensive very fast.

Understandably, since this is a rated-R comedy, there are bound to be some off-color jokes. However, some of the jokes are too colorful.

Jokes about Bill Cosby’s legal troubles due to allegedly drugging and assaulting women, “a Jew in the oven,” and a baby playing with a female adult toy are not, but probably should have been, off limits. Laughable, but they went too far.

I get it. This film is supposed to be the female-empowered version of the first film and it’s all about a young woman’s right to party and not be marginalized as a sex symbol. Bravo. I applaud the effort. But, this film is a little too offensive for this adult. Or, as the brats of Kappa Nu would call me: an old person. This film doesn’t draw a line between right and wrong.

It just flops around shouting about feminist ideals while glorifying girls behaving badly.

This is not a female empowerment film. This is just an other frat movie with girls in it. If you really want to watch a movie that empowers women, skip Neighbors 2 and rewatch Bridesmaids or the Divergent franchise or even the new Ghostbusters. Any film that will remind us that being an empowered female doesn’t mean being an intoxicated, drugged, uncontrollable brat.