‘SANKOFA: FOR THE RECORD,’ AT SPADY 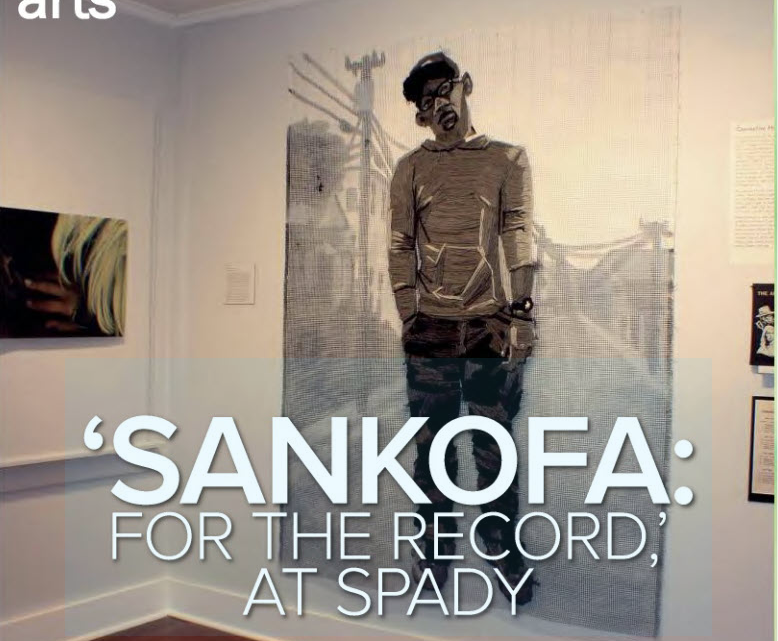 DELRAY BEACH, Fla. – What if what we were taught about ourselves and others was not true? What if the re-tellings of history were skewed or interpreted through the lens of race, instead of fact? What if those misinterpretations were laid bare and subjected to individual scrutiny, free of outside bias?

The concept of looking back with discernment in order to move forward with knowledge is part of Sankofa. Sankofa is a word in the Twi language of Ghana that translates to “go back and get it,” and
also refers to the Asante Adinkra symbol represented either with a stylized heart shape or by a bird with its head turned backwards, while its feet face forward, carrying a precious egg in its mouth.

The newest exhibit at the Spady Cultural Heritage Museum, “Sankofa: For The Record,” depicts history re-written, re-interpreted and re-examined with dramatic artwork, illustrations and words from local contributors. The show is on display through Aug. 17.

Show co-curator Khaulah Naima Nuruddin summarizes the theme this way: “In a world saturated with media, whose sole purpose is stimulating attention for the moment, it’s easy to forget that things can be made to specifically exist in connection with the past and the future. Things can be made for the record.

“For the artists whose work is presented, ‘the record’ is intimately tied to Sankofa, the Akan principle of looking to the past and taking what’s useful to move forward.

“Across a variety of media and pulling from experiences both deeply personal and widely shared, the work in this exhibition considers how we are shaped by the past to see, understand, and express ourselves.”

In addition to work by Nuruddin, other contributions to the show were made by co-curator Allison Bolah and artists Shiobann Amisial, Katiana Jarbath, Kandy G. Lopez and Carol-Anne McFarlane.

Examples of the texts that are examined in the artwork include acknowledging historical truths, such as the case of AP World History: Modern. In the summer of 2018, the College Board, the non-profit organization behind the SAT, made changes to its Advanced Placement (AP) World History course that cut approximately 9,000 years of human history from that curriculum. Renamed AP World History: Modern for the 2019-2020 school year, the course will begin in 1200 CE, a span of time dominated by the West’s global imperial, colonial, and capitalist projects.

Critics of the course, including students and teachers, assert that such a curriculum places the West, its imperatives and its achievements, at the center of students’ interaction with human history and marginalizes all other world cultures.

Previous post Interview: THE FORCE OF NATURE THAT IS PAM GRIER