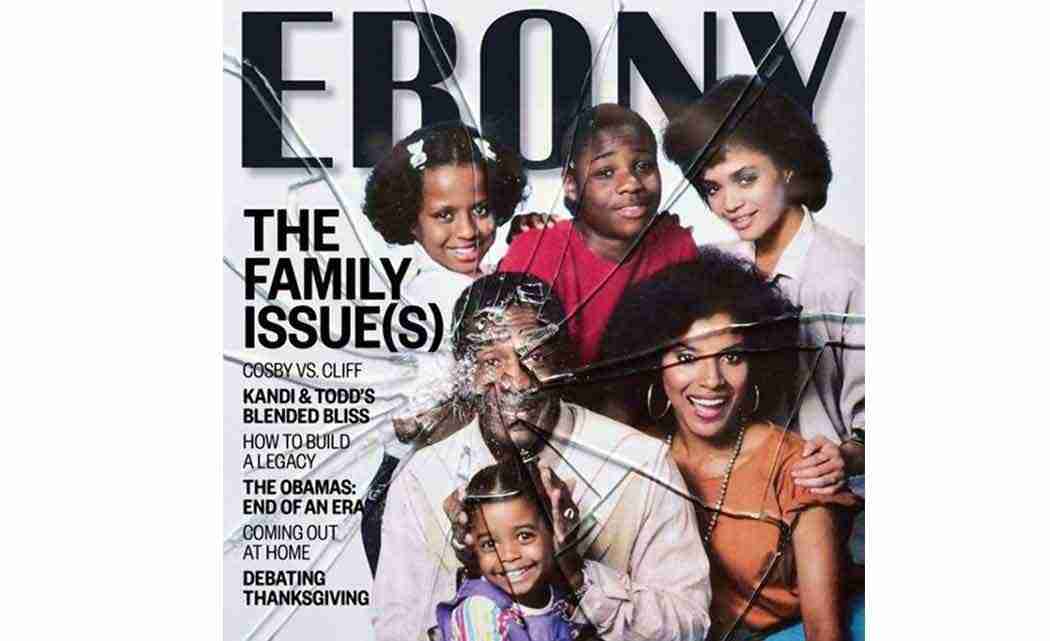 Wherever you stand regarding the sexual assault allegations levied against Bill Cosby, Ebony magazine just took the issue to a whole new level by questioning whether the comedian has tarnished the legacy of the once beloved, The Cosby Show, now that the show’s star has been charged with drugging and raping over 50 women.

By presenting the famous family portrait behind cracked glass on the cover of its November issue, the magazine is forcing black America to more deeply examine its feelings about Cosby, and whether what he is alleged to have done as Bill Cosby minimizes what Dr. Heathcliff Huxtable meant to us.

Many supporters of Cosby question his accusers’ motives and wonder why they took so long to come forward. Many question how a black man in America could get away with raping dozens of white women when black men and boys have been killed for far less.

Critics of Cosby say there are a number of reasons why rape victims either fail to report or delay reporting their assault – public backlash and a societal blame the victim mentality are among them. Critics also point out that while racial dynamics certainly factor into sex crimes, the allegations regarding Cosby are framed in a different dimension where the funnyman’s power apparently held significant sway in Hollywood.

Some who supported him initially, like singer Jill Scott, changed their minds when he acknowledged in a deposition that he purchased drugs with the intention of using them on women with whom he planned to have sex.

Aside from the unshakeable truth behind the saying, “what you do in the dark, always comes to the light,” many believe that Cosby guaranteed this very public karmic experience by his relentless public clowning of low income blacks who don’t measure up to his now questionable standards. It was comedian Hannibal Buress who juxtaposed Cosby’s moral rants aside his alleged sexual assaults.

The Ebony piece, written by Goldie Taylor, forces black America to stop hiding behind the racial allegiance that had so many celebrating O.J. Simpson’s acquittal of murder and to actually reflect on the many faces of Bill Cosby; possibly grieving the loss of an image and legacy that feels personal.

Kierna Mayo, EBONY’s Editor-in-Chief, said the decision to publish the article with the accompanying cracked cover image was not an easy one. She refuses to dismiss or mock the emotional investment that so many people have in The Cosby Show.

As expected, the reaction on social media ranges from kudos to strongly worded disgust with Ebony for daring to go there. Mayo wrote in a Facebook post, “I believe with everything that our collective healing (from this and all traumas) is tied to baring truths, confronting selves, and dismantling crutches. We aim to uplift. However, sometimes before you rise up, you break down.”