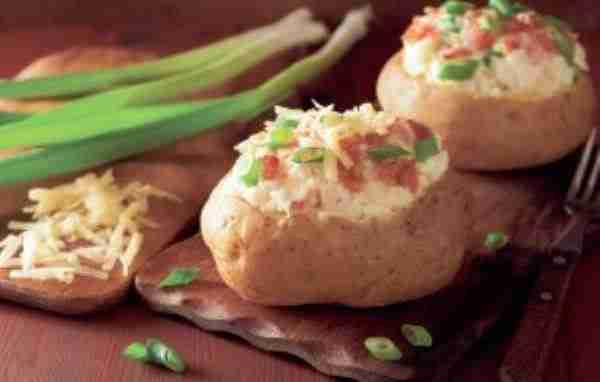 A fluffy baked potato is a glorious thing, but too often you slice into the potato and it is shiny and waxy, not light and creamy in texture.

Baking a potato is the easiest thing in the world, right? Then why are so many potatoes lacking in texture and flavor?

First, for the traditional baked potato that is going to be loaded with toppings, you must buy a russet potato. Russets have a thicker skin and a beautiful starchy, snowy – almost meaty – interior that soaks up all your butter, cheese and sour cream. I love making smashed potatoes with red new potatoes or baby Yukon gold potatoes, but only a russet will do for a “baked potato.”

For my latest cookbook, “Steak and Cake,” I tested several popular ways of baking potatoes. I have friends who swear by wrapping the potato in foil before baking. I have always baked the potato without the foil, but I tried both ways. I baked them at 350 degrees Fahrenheit and at 400 degrees too.

The potatoes took a bit longer to bake at 350 but they were fluffier, and had a better crust and interior texture. Generally, when you cook anything at a higher temperature, the outside gets done before the inside. That means you risk an overdone exterior by the time the interior is cooked through. Potatoes are no exception. That’s why I prefer a lower temperature. But if you like to bake your potatoes at a higher temp, do so. It is all about what works.

The potato wrapped in foil was waxy and had a hard texture even when fully cooked. The foil also prevents the skin from become crusty, which I think is the best part of a baked potato.

If you are a fan of twice-baked potatoes, you have to bake them unwrapped or the skin/shell will be too soft to re-stuff.

When I bake potatoes, I preheat the oven to 350 degrees Fahrenheit and place a sheet of heavy-duty aluminum foil on the bottom shelf of the oven in case any of the juices drip. After washing and drying the potatoes, I coat them with either a little regular Crisco shortening or olive oil – both work well.

Next, I prick them four or five times with a fork to let steam escape while they are baking. Sometimes, I sprinkle them with a little kosher salt to add to the skin’s flavor, but it doesn’t affect the interior. I place the potatoes in the center of the oven, directly on the oven rack set over the foil. Drips are generally not an issue for russet potatoes, but they are a big issue for sweet potatoes, which I bake exactly the same way.

After an hour of baking, I stick the end of a paring knife into the potato to gauge its doneness. It generally takes another 20 minutes to be perfect, but it depends on the potato’s size.

A little tip for those who like to make twice-baked potatoes: Always bake three potatoes for two finished potatoes, so you can mound the filling over the top. I make them often for dinner parties since they are best made in advance and re-heated just before serving.

Next post Freedom Riders: Nonviolence won the day in ’61 against mob