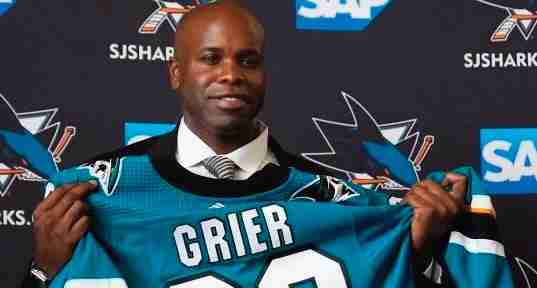 Mike Grier, born in Detroit, Michigan and raised in Holliston, Massachusetts, started playing hockey at St. Sebastian’s School in Needham, Massachusetts. Mike took his hockey playing talents to Boston University where he at first was a reserve riding the bench then advanced on to become the first team all-star. His excellence on the ice grabbed the attention of National Hockey League recruits.

Mike began his 14-season NHL career in 1996, becoming the first African American born and trained in the United States to play in the NHL. He started his career playing for the Edmonton Oilers NHL team as a right wing forward for six seasons. In 2002, he was traded to the Washington Capitals, 2004 to the Buffalo Sabres where he helped lead the team to the 2006 Eastern Conference Finals, 2006 to the San Jose Sharks, and in 2009 back to the Buffalo Sabres.

After Mike retired from playing hockey in 2011, he moved on to become a scout, coach, and executive.