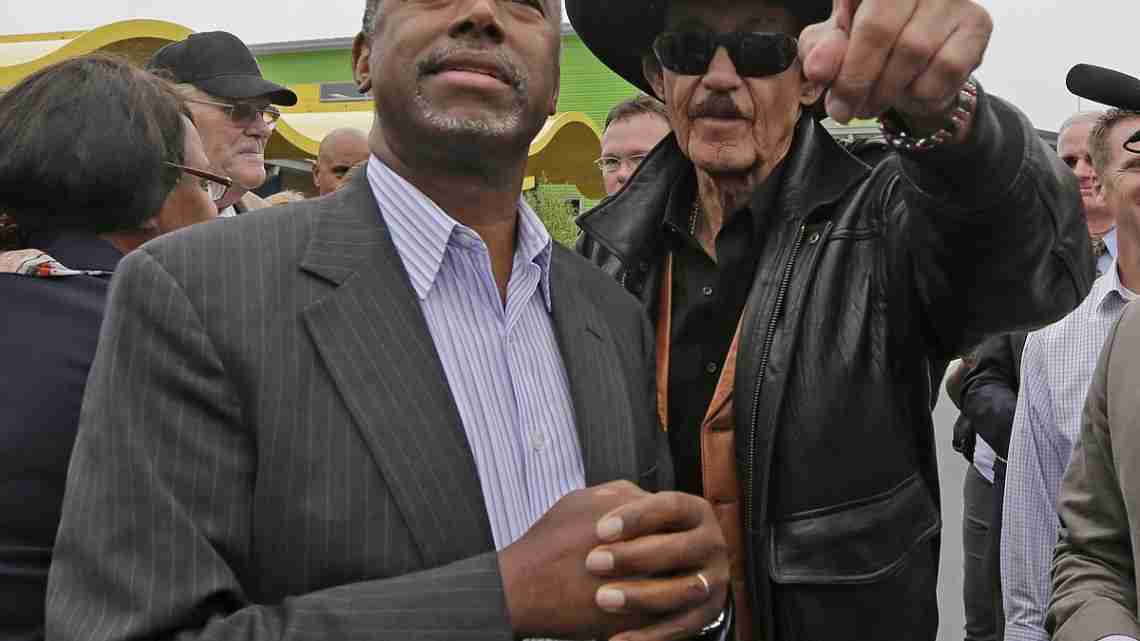 Petty’s support marks a significant step for Carson, the only African-American in the crowded 2016 Republican field, as he navigates delicate political issues in a region that could play prominently in the selection of the next Republican presidential nominee.

The retired NASCAR driver appeared with the retired neurosurgeon Monday at a camp for disabled children established by Petty’s foundation. While he shied away from a formal endorsement, Petty left little doubt about the significance of the appearance.

“We’re hoping he’s endorsing the camp, we’re not necessarily endorsing him, but we are, you know what I mean?” Petty, in his trademark cowboy hat and sunglasses, said in a brief interview with the Associated Press. He later posed for pictures aboard Carson’s campaign bus.

“He’s very humane,” Petty said when asked what he liked about Carson. “That’s one of his strong points as far as we’re concerned.”

Formal or not, Petty’s support lends Carson some credibility in North Carolina and among a broader swath of Southern states set to play a key role in the 2016 Republican presidential primary. Alabama, Arkansas, Georgia, Oklahoma, Texas, Kentucky, Louisiana and Virginia are expected to host Republican primary contests in the first week of March.

Carson has toured the country extensively in recent years, but in some ways, the Detroit native is still learning about the South.

He was cautious when asked to weigh in on Petty’s recent comments on the Confederate Flag, a symbol of slavery for many African-Americans and southern pride for whites. The flag is often flown prominently by NASCAR fans before and after races around the country. Petty this summer called the flag debate “a passing fancy.”

Carson told the AP that NASCAR fans should continue flying the flag “if it’s private property and that’s what they want to do.”

He also acknowledged the flag remains “a symbol of hate” for many black people and compared it to the Nazi swastika.

“Swastikas are a symbol of hate for some people, too. And yet they still exist in museums and places like that,” Carson said, describing the decision about flying the flag “a local issue.” “If it’s a majority of people in that area who want it to fly, I certainly wouldn’t take it down.”

Carson, who has never held elected office, has surged in recent polls by tapping into an aggressive anti-establishment sentiment roughly four months before the Iowa caucuses. He said he expects to raise $20 million for the fundraising quarter that ends this month, tangible evidence of his extraordinary appeal.

Julie Lopp, whose family owns Lexington Barbecue, where Carson and his team stopped for lunch Monday, said Trump is “a little bit too extreme.”

She said she was still learning about Carson, but would likely support him or former technology executive Carly Fiorina in the Republican primary. “I just think he’s honest,” she said of Carson.

She also suggested there were white southerners who probably wouldn’t support Carson because of his race.

“As much as people try to sound like they don’t care, some people think a black president will look out for the black lifestyle,” said Lopp, who worked in Lexington Barbecue for the last 36 years, adding that women like Fiorina would likely face discrimination from some voters as well.

Carson dismissed such comments with a shrug: “Racism exists everywhere,” he said.

Meanwhile, his lack of experience in the South was apparent over lunch.

“What are these?” he asked his wife, pointing to a small fried morsel as they began to eat. “Hush puppies,” she responded.