Ophthalmologist or Optometrist? Knowing the difference can save your vision 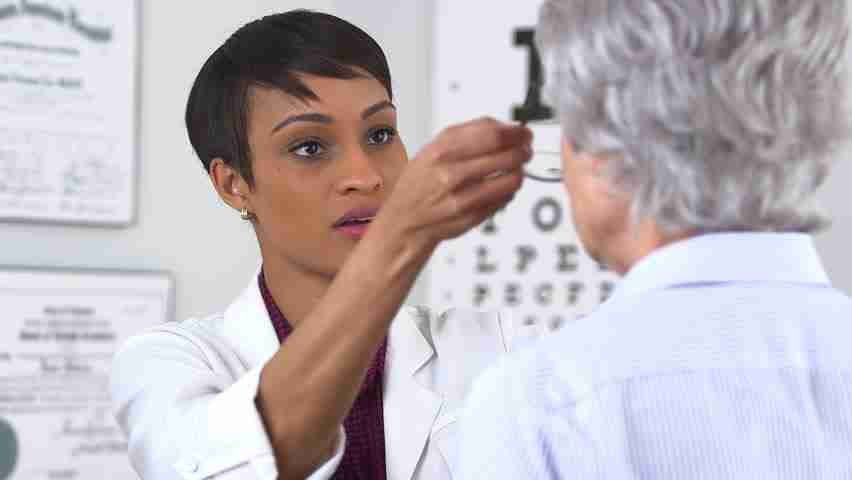 Tears flow from the nearly sightless eyes of Marilyn Rumph. At 49, this hardworking African-American woman is losing her ability to read, drive and watch her children grow up. A few years ago, she had two working eyes and ambitions for the future. Today, she struggles to see.

Just the thought of it makes her cry. Her condition, she believes, could have been prevented. A confluence of circumstances led the Palm Beach, Florida native to this dark, unfortunate place: she says she was ignored, mistreated and misdiagnosed by the one eye-care specialist that she had trusted.

It is a place an increasingly number of African Americans are finding themselves these days. The National Eye Institute says African-Americans are more prone to certain eye conditions than other Americans and the number of low vision cases in the black community could double by 2030. Add to that, the growing numbers of African-Americans reaching retirement age, and the community is about to see record numbers of eye problems.

At stake are billions of dollars of insurance, Medicaid and Medicare payments, which will flow to one group of professionals or the other—optometrists or ophthalmologists. To win some of that money, optometrists are demanding legal changes to allow them to do the work once reserved for medical doctors—without getting the training or supervision of medical doctors. Some optometrists want to perform eye surgeries, prescribe drugs and otherwise take the place of medical doctors.

Some states, including Florida and Kentucky, are considering measures that will vastly expand the role of optometrists, without necessarily telling the public that they are not actual medical doctors. That may save the state and federal government tens of millions of dollars per year since the non-doctors bill at a lower rate than doctors, critics say, but many patients could lose their eyesight in the bargain.

The optometrist political action committee, a Florida lobby group, has spent as much as $400,000 urging politicians to pass a bill giving optometrists most of the privileges of doctors.

The bill was adopted by Florida’s lower house and and is scheduled for a vote in the state senate’s Health and Welfare committee in the coming weeks. Rumph’s case cuts right to the center of the controversy between tometrists opand ophthalmologists. While many patients cannot tell the difference and sometimes falsely believe that optometrists are medical doctors.

In fact, optometrists do not go to medical school or pass medical doctor state board license exams. Instead, they earn PhDs in eye care—which is why they can legally call themselves doctors, as any PhD holder can.

“The difference between the two professions can confuse many Americans who don’t have time to learn the difference,” said Sandra Greenberg, the president of the National Consumer League. She added that the system works best when optometrists and ophthalmologists work together to help their patients. Since optometrists are generally cheaper, some insurance plans push people to nonmedical doctors first.

Rumph said she trusted the expertise of her longtime optometrist, who could not explain her painful eye or blurred vision. He prescribed new eyeglasses, she said.

It was not until she got fed up and went to a second optometrist, who recommended she see an ophthalmologist, that she finally saw an actual medical doctor. As a ophthalmologist, he had a wealth of experience of eye disease, which learned as a resident physician in a nearby hospital. He quickly diagnosed her with two detached retinas. By then, it was too late to save her vision.

One retina was so severely damaged that it could not be corrected with surgery. The other was repaired, but Rumph’s vision is far from clear, she said.

At issue was the difference between the eye care professionals. An optometrist is a vision professional, not a medical doctor. Once known as an optician, as explained by the College of Optometrists, he is “trained to examine the eyes to detect defects in vision, signs of injury, ocular diseases or abnormality and problems with general health, such as high blood pressure or diabetes. They make a health assessment, offer clinical advice, prescribe spectacles or contact lenses and refer patients to further treatment.” He does not perform surgeries.

An ophthalmologist is a medical doctor who is trained to perform eye exams, diagnose and treat disease, prescribe medications and perform eye surgery. They also write prescriptions for eyeglasses and contact lenses.

In Rumph’s case, according to her, optometrist Dan Durante, whom she had been a patient since 1992, ignored her concerns and did not refer her to an ophthalmologist. Instead he increased the strength in her prescription glasses, she said.

“He told me, ‘You’re fine. It takes a while to adjust to new lenses’” Rumph said. “The last time I went he was just angry and felt I was wasting his time when all I wanted was my ability to see. I thought I was going mental.”

Durante has run a successful practice in Florida for many years and his Jensen Beach, Florida office receives 11 reviews on Yelp.com—giving him a score of 4.5 stars out of 5.

Still, the reviews also include complaints from patients. Several attempts to reach Durante, via phone and email, went unanswered.

In severe cases like Rumph’s, quickly seeking out a reputable ophthalmologist can be the difference vision and blindness, or day and endless night.

Medical training can be the deciding factor. Even in Rumph’s case, the first optometrist missed her condition entirely and, while, the second optometrist correctly diagnosed a detached retina in one eye… he failed to notice it in her other eye.

The ophthalmologist determined that vision in one eye was 90 percent gone. But, he thought, with the careful surgery, he could save the other eye. With his surgical skills, he was able to restore her eyesight in one eye. Even then, she said, her vision is often marred by blurriness.

As a result, her husband said, she suffers bouts of depression. The so-called “eyeball wars” will grind on, going from state to state, pitting optometrists against ophthalmologists. Getting lost in the fight over profits and patients is the simple failure to disclose the truth. If Rumph had known her trusted optometrist was not actually a medical doctor, she might be seeing out of two eyes today.

Next post I say no to a Starbucks boycott