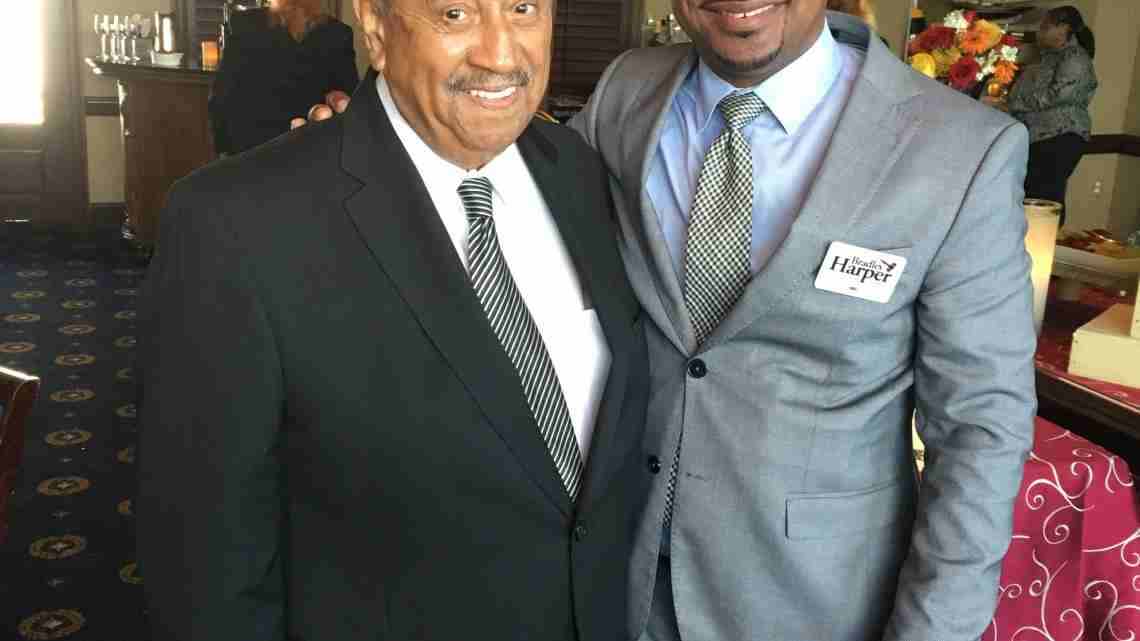 So it is notable that the belo-ved retired jurist points to judicial candidate Bradley G. Harper as ideal for voters to elect to wield a Group 15 County Court gavel.

Notable too is that for 20 years no African-American judge has been appointed to the circuit court, and similarly for 10 years none to county court until Cymonie Rowe was tapped by Gov. Rick Scott last week.

“We have a paucity of minority judges,” Rodgers said in encouraging voters to elect Harper in the upcoming Aug. 30 balloting. “I think we should have a bench that looks a little more like the community it serves. People should feel a little different whenever they go to the courts. They should see people who look just like them who are making the decisions affecting them.”

He returned to West Palm Beach, he said, to continue a family legacy of working to improve the social, political and economic conditions in his community.

Harper has since distinguished himself not least as a husband and father of four, and becoming recognized for selfless community service; he also has prepared himself as a     hard-working attorney, litigating hundreds of cases, representing thousands of individual and corporate clients, in both civil and criminal cases.

“Seeking election as a judge is a natural extension of my passion for our system of justice, my preparation as a skilled courtroom advocate and my history as a community servant,” Harper says. “Well functioning law and justice institutions, bound by the rule of law, are critical to the economic, political and social development of our community.”

That helps explain why the Fort Lauderdale Sun-Sentinel deemed him the best choice for voters. “Harper also has a record of community involvement, having started programs that urge the need for civic activism and the importance of voting and jury service,” said the newspaper in its endorsement, adding: “His record and temperament make him especially suited to county court and its many defendants who represent themselves.”

There’s a key matter Rodgers cites, the “extremely great difficulty in getting black judges elected because elections are expensive. I don’t think we have had many black judges to be elected the first time,” he said, noting that like him, the handful of local African-American judges were first appointed, then successfully ran for re-election.

Meanwhile, Assistant State Attorney Ettie Feistmann, also running for the County Court Group 15 seat, is mostly self-funding her campaign with loans totaling $150,000 as of May, the Sun-Sentinel reported. Harper has not loaned his campaign any money while raising roughly $70,000.

Elsewhere, reports underscoring the need for more judicial diversity include the Florida Judicial Qualifications Commission’s charges against a Jacksonville circuit judge, over allegations that he made derogatory comments toward women, and said black people should “go get back on a ship and go back to Africa.”

Closer to home, and in another sign of his qualifications, Harper last year was vetted by the 15th Judicial Circuit Judicial Nominating Commission. Although not selected by the governor, he was one of 12 finalists for two circuit court vacancies.

“He’s as qualified as anybody else who is running,” the eminent Rodgers said. “I think he can do a nice job.” Among other endorsements of Harper to don the judicial black robes, the National Organization for Women agrees.

“I believe the community supports me,” Harper said, “because I am prepared, and they know the justice system needs judges who are committed to maintaining an atmosphere of integrity and fairness.”