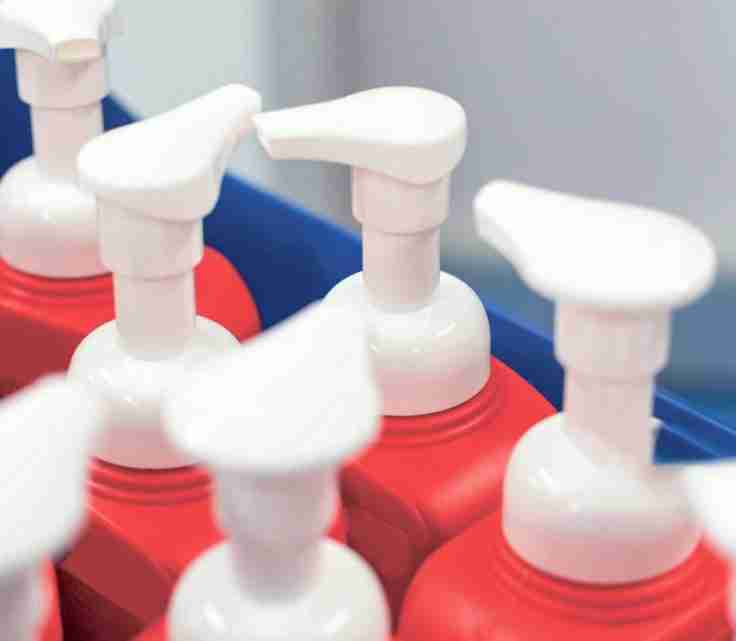 Oakland Park, Fla. (AP) – At ChainBridge Distillery in Oakland Park, Bela Nahori spends his days distilling fruit brandy, basil-infused vodka – and stressing out about the 500-gallon stockpile of hand sanitizer taking up space in the back room.

His distillery stopped making spirits and started pumping out muchneeded hand sanitizer for the ﬁrst wave of the COVID-19 pandemic. Nahori donated 5,000 gallons to frontline workers and emergency responders, and sold tiny bottles to the public. By June, Nahori stopped, as demand for hand sanitizer plummeted and big brands like Purell returned to stores.

He’s barely sold any since, and doesn’t know what to do with the surplus of unsold disinfectant sitting in 55-gallon drums next to his copper still. Nahori is back to making fruit brandy, but hardly anyone visits his distillery to buy it.

“I kind of ran out of storage space at this point,” Nahori says, gazing around the 4,000-square-foot distillery he runs with his wife, sister and parents. “I can’t give sanitizer away because I need to recoup costs, but no one buys from a distillery when you can ﬁnd it at Walgreens.”

After stepping up early to make vital hand sanitizer – investing thousands of dollars to do so – ChainBridge and other family-owned craft distillers are now struggling to stay afloat.

It’s an unusual irony for spirit-makers: Between March and mid-July, booze sales boomed online, according to a July report from Nielsen – but not at craft distilleries. Unlike bars, which remain closed but can offer curbside liquor and cocktails to-go, South Florida’s craft distilleries can only sell full bottles out of their tasting rooms and customers aren’t showing up for tours.

Which means distilleries had no choice but to replace liquor sales with hand sanitizer revenue, says Chris Swonger, president and CEO of the Washington, D.C., advocacy group Distillery Industry Spirits Council of the United States.

“Making hand sanitizer during that period was an economic lifeline,” Swonger says. “Most U.S. distilleries are small and family-owned. They’ve lost 41 percent of their business and laid off 4,600 people.”

Nahori spent $10,000 of his life savings on sanitizer ingredients, a steep investment “I probably won’t get back,” he says. His tasting room has been closed for six months, and liquor sales dropped 90 percent. “I still feel pride for helping when there was a huge demand for sanitizer,” Nahori says. “But right now I feel forgotten.” Nahori and other distillers got the green light from the federal Alcohol and Tobacco Tax and Trade Bureau and the Food and Drug Administration to rapidly make hand sanitizer without the usual state inspections. He says making it was easy, requiring four ingredients: sterilized water, hydrogen peroxide, glycerin and ChainBridge’s high-proof, sugarcane-distilled alcohol.

Much of Ben Etheridge’s remaining 250 gallons of hand sanitizer has sat untouched for two months at Steel Tie Spirits Co. in West Palm Beach. Like Nahori, he rushed into action at the pandemic’s outset, producing 7,000 gallons that he quickly donated to ﬁrst responders. Now that demand has cratered, he hasn’t sold a single bottle in three weeks.

Etheridge’s Steel Tie Spirits, which opened in 2019, specializes in 80-proof vodka, gin, whiskey and its signature spiced liquor, Black Coral Rum, made with black strap molasses. Without sanitizer revenue to replace lost liquor sales, Etheridge says his distillery has survived only because Black Coral Rum is already distributed to Total Wine & Spirits and other liquor retailers.

“So many people needed sanitizer and wanted to buy it, and it was morally right to help as many people short-term,” Etheridge says. “But you look at our bill after buying all these ingredients and I’m like, `Holy crap, we spent $17,000 to make this.’ We ate a bunch of money.”

While he prefers to sell it to break even on costs, Etheridge will probably donate the remaining sanitizer to ﬁrst responders. His bigger problem: Distilleries now need another lifeline, he says.

“We need the intervention of lawmakers to survive. Our state laws need to change,” he says. “I’m not saying we were left in the woods to die, but this is us standing in the woods yelling for help.”

Florida distillers have fought since 2012 to convince Tallahassee to lift roadblocks on how they can sell spirits directly to consumers. The most recent, Senate Bill 220 – which would have let distillers sell libations by the glass – died at the end of the 2019 legislature session, says Phil McDaniel, owner of St. Augustine Distillery and president of the Florida Distillers Guild, an advocacy group.

Craft distillers tried urging Gov. Ron DeSantis for ﬁnancial relief during a press conference on Friday in Jacksonville, asking him to lift restrictions on over-the-phone and Internet sales

“Look, it seems like it would be something that would be reasonable,” DeSantis said on Friday. “I don’t know what the underlying law is. I’d have to review it and then see what my authority would be to waive this or that.” Changing laws so booze can be shipped directly to a consumer’s home “makes perfect sense,” says McDaniel, who says gift shop and tasting room revenues are down 50 percent. “You flatten the curve because people aren’t out shopping.

“We risked our capital to make this hand sanitizer and donated it,” he says. “We did the right thing and now we need the state’s help.”