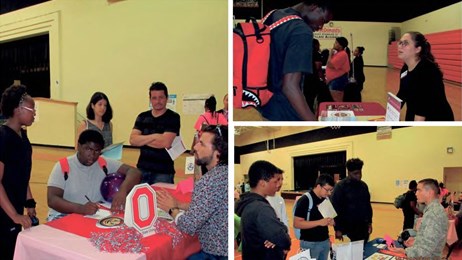 DELRAY BEACH, Fla. – In one night, Diego Mondragon learned to navigate the path to college, options available to him after graduation and ways to pay for his education.

Mondragon was among more than 50 students from high schools in southern Palm Beach County who attended the inaugural college fair on Thursday night at Village Academy.

“I genuinely enjoyed it. I actually got to meet with one of the advisors and actually had a very good conversation with him about the program I actually want to study in,” said Mondragon, a senior at Village Academy.

“He showed me some courses that will be probably beneficial, the steps I should take, and what would make me a more favorable applicant, and that experience alone made my night.” Several students said it was a great way to learn from the educational institutions and to find out what they expect from prospective students.

Representatives from more than 25 universities, community colleges, trade schools and the armed forces came with smiling faces to greet the students.

Dr. Roselle Cesar from Upward Bound conducted breakout sessions for college readiness and planning businesses. Students were eager to speak to and impress the representatives while also learning tools and programs that would give them a competitive edge.

Janya O’Meara, agreed with fellow student Mondragon that the event was very informative and worthwhile.

“What I liked about this college fair is that there was a variety of colleges from all over, and that (students) were actually interacting with the colleges,” the Village Academy ninth grader said.

O’Meara, who also is a member of KOP Mentoring Network, ran the concession stand for the organization.

KOPMN in collaboration with Village Academy hosted the event, an offshoot of a larger fair, sponsored annually by the Palm Beach County School District at the South Florida Fairgrounds a day earlier on on Oct. 23.

“There were several students who live in the south end of the county who could not attend last night’s college fair for several reasons, so this gave them another opportunity to meet with these representatives and get first-hand information about the college application process and financial aid,” Mills said.

The fair was Mills’ senior year project for KOP Mentoring Network, which she serves as president. Each year, seniors and juniors in the mentoring program are required to do a service project as part of the requirements for successful completion.

The representatives also enjoyed interacting with the students. Some realized the process of selecting a college or university can be daunting and were eager to assist the students chart their course.

“As a first-generation college student, I didn’t know what I was doing,” said Claudia Montas, a recruiter from Florida Atlantic University, who was in the students’ shoes only a few years ago.

“I had to Google everything so that’s why I’m here… I loved working with you all.”

“Education is high on our agenda,” Smith said. “We want these children to know that education is the key to getting them wherever they want to be in life.”