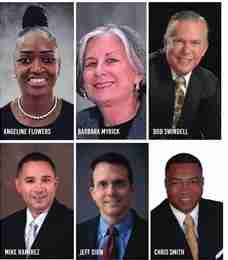 Receiving the Bank of America Community Achievement Award for significant achievements in any field are:

Jeffrey R. Dion, a graduate of the class of 1985 from Nova High School and executive director of the National Compassion Fund, which partnered with Broward Education Foundation to disseminate proceeds from the official Stoneman Douglas Victims’ Fund Christopher L. Smith, corporate attorney with Tripp Scott Conklin & Smith and member of the class of 1988 at Plantation High School.

The three inductees who will receive the Charter Schools of Excellence Education Achievement Award for their dedication to a career in public education are:

Barbara J. Myrick, general counsel for the School Board of Broward County, FL and member of the class of 1966 at Fort Lauderdale High School.

In lieu of its annual Lifetime Achievement Award, this year Broward Education Foundation will honor those lost in the February 14 tragedy with the JM Family Enterprises, Inc. Special Tribute to the Marjory Stoneman Douglas 17 Fallen Eagles.

“Each year it is our privilege to recognize some of the most exemplary, accomplished and distinguished graduates of Broward County Public Schools,” said Shea Ciriago, executive director of Broward Education Foundation, which is celebrating its 35th anniversary this year. “We take great pride in welcoming these inspiring leaders into the Hall of Fame class of 2018. They are truly making a difference in our community and in education.”