Spring time in South Florida be wary of the snakes 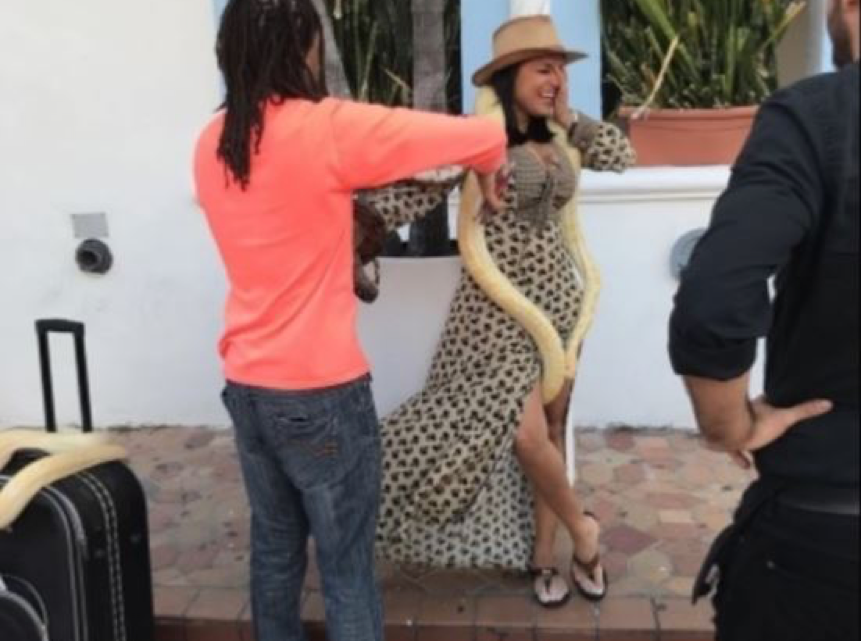 Depeyster at photo shoot with Albino Burmese Python measuring 9 to 10 feet long which was confiscated by Florida Wildlife officials.

February may be Black History Month and March is celebrated as Women’s history month. But in southern Florida, April should be officially called “Snake Awareness Month.”

It is in April when the afternoons become hotter and snakes are on the prowl for food, sunbathing and breeding. Not necessarily in that order. Reptile expert Mark McCarthy says making a Snake Awareness Month would be a good idea.

“As soon as it starts warming up, the temperature starts getting warm during the day, that’s making the cold-blooded animals move more so, said Mark McCarthy in a news clip on WPTV. “During the cold spells they’re not moving so much,” said McCarthy owns McCarthy Wildlife Sanctuary which is a popular tourist destination in West Palm Beach.

South Florida has a good share of both venomous and non-venomous snakes. McCarthy has been handling venomous snakes every day since 1972. Maintaining such snakes requires a special permit from the State of Florida.

“One needs 1000 hours of working experience, cage requirements and a secure building and a $10,000 bond,” said McCarthy.

McCarthy’s boasts that his wildlife sanctuary is secured with infected foam insulation to guarantee that snakes do not slither out into the wild.

“I have never had any of the snakes escape. But you have to be aware because snakes can get through the smallest holes,” said McCarthy.

Working with venomous snakes does have its occupational hazards. McCarthy has been bitten four times during his long career. He had to be hospitalized three times.

In the latest incident McCarthy got to the hospital fifteen minutes after the bite and his throat was so constricted they had to put in a trach so he could breathe.

“The last time was the worse. It was a six-foot Eastern diamondback.” said McCarthy. “I was in a coma for three days and in the ICU for 13 days.”

Still he says he is lucky to be alive and still able to handle snakes despite numbness in the hand where the bit occurred. Owners of some non-venomous snakes also need a permit to keep a snake as a pet.

Ernesto Depeyster, who displays his snakes to South Beach tourists and residents to pet or take pictures, learned this the hard way.

Depeyster, 37, was issued a citation last month for “violating Florida administrative codes pertaining to wildlife as a personal pet” and “capturing, keeping, possessing, transporting, or exhibiting a reptile of concern without a permit.”

Both charges are a misdemeanor. The Miami Beach resident was found with two snakes: an Albino Boa and an albino Burmese python. The Florida Fish and Wildlife Conservation Commission (FWC) confiscated his Burmese Python.

Depeyster said he acquired the snake from an 11-year-old who had a license. However, such a license cannot be issued to a minor, said FWC officials.

The risk of handling venomous snakes is quite clear, but the FWC see Burmese pythons equally dangerous because of their invasive nature. Burmese pythons, which originate in southeast Asia, are one of the largest species on earth growing up to 18 feet long and weigh over 200 pounds. State officials have long been concerned about the proliferation of these large serpents in the Everglades. They are not venomous but they are constrictors who kill by squeezing, suffocating and then swallowing their prey whole.

FWC spokesman Robert Klepper said the increasing number of Burmese pythons in the wild is a result of inadvertent and intentional releases by pet owners.

“The FWC promotes responsible ownership of captive wildlife,” wrote Klepper in an email. “It is the goal of the FWC to develop the best regulations possible that provide for public safety, animal welfare, and the legitimate use of wildlife for educational, exhibition, or personal purposes.”

The Florida Fish and Wildlife Conservation Commission has a program in which it pays contractors to remove wild pythons. A fully-licensed contractor earns an hourly rate for conducting surveys and an additional $50 for each python killed or captured.

Adding $25 for each additional foot of snake provides a payment of $150 for an eight-foot snake. Removing a nest of pythons earns a payment of $200 once verified in the field by FWC wardens.