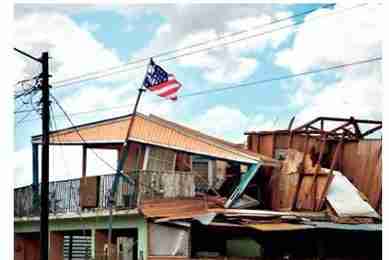 A political party banner waves over a home damaged in the passing of Hurricane Maria.

According to a poll by the Associated PressNORC Center for Public Affairs Research, just 32 percent approve of how Trump is handling disaster relief in the U.S. territory, while 49 percent disapprove.

“It took him how long to get to Puerto Rico?” said Bree Harris, a 25-year-old chef and Democrat from Los Angeles. She suspects Trump “didn’t even know that Puerto Rico was an island that was part of America. It’s embarrassing.”

Trump drew better marks for his handling of the recoveries after hurricanes Harvey and Irma. Forty-eight percent of Americans approve and just 27 percent disapprove of Trump’s handling of recoveries in U.S. states, including Texas and Florida.

The poll was conducted before Trump on Tuesday made his first trip to Puerto Rico, an island 1,000 miles from the mainland, after Hurricane Maria roared ashore Sept. 20 and knocked out all power. The federal response has drawn criticism and the administration has aggressively pushed back.

After lavishing attention and time on Texas and Florida, Trump tweeted his wish for Puerto Ricans to “be careful” just before the storm hit, but then didn’t talk publicly about the island’s post-hurricane struggles for days as he chose instead to fight with the NFL over some of its players kneeling for the national anthem.

Critics said the president had failed to grasp the magnitude of Maria’s destruction as quickly as he had the twin wallops of Harvey and Irma.

A week later, Trump publicly tuned in to Maria’s aftermath. He sent multiple administration officials out to defend his response. He called briefings and meetings and insisted that helping Puerto Ricans was a top priority.

But Trump also suggested their suffering was partly the fault of officials who had allowed the island’s infrastructure and economy to degrade before the hurricanes and said local people should be doing more to help the recovery.

In an interview with Fox News on Tuesday, Trump said that “we’re going to have to wipe out” Puerto Rico’s debt.

“We’re going to work something out,” he said. “We have to look at their whole debt structure. You know, they owe a lot of money to your friends on Wall Street.

And we’re going to have to wipe that out.”

On Wednesday, however, White House budget director Mick Mulvaney appeared to walk back Trump’s remarks, telling reporters “we are not going to be offering a bailout for Puerto Rico or for its current bondholders.”

Widespread disasters offer presidents much to gain – or lose – politically as they try to play the role of comforter while competently leading the government’s response to life-and-death issues for masses of Americans.

“He didn’t do a tremendous job in the states, but it’s not quite as disturbing and horrific as his response in Puerto Rico,” said Tara BleshBoren, 34, a registered independent from Lincoln, Nebraska. “He is so busy getting his ego involved in these ridiculous back-and-forth arguments about things that don’t matter to anyone but him that he is really not managing our country.”

The poll includes responses from people in all states, but not in Puerto Rico or other U.S.

While some Puerto Ricans expressed appreciation for Trump’s visit on Tuesday, others said they were frustrated with the pace of the recovery – and the tone of some of the president’s remarks.

Officials say 93 percent of the island still lacks electricity. In the capital, San Juan, where most neighborhoods remain without power, pastry chef Rose Cisneros said her family is faring well but she worries about communities in the island’s mountainous interior that are still struggling to access food and clean water.

“I am grateful the military is helping. I wish it could be even more,”

Cisneros said, adding that she’s been frustrated to hear Trump bring up Puerto Rico’s debt and the cost to the federal government for the recovery effort.

Water service has been restored to about half of customers across the island, according to the governor, who has said he hopes 25 percent of electricity customers will have power by the end of October. Officials have said power would be restored to the entire island before March. Many stores have opened, including half of the island’s grocery stores, but many have run out of basic supplies and lines are still long.

Nearly 9 in 10 Democrats and 7 in 10 Republicans say the U.S. government has a major responsibility to help disaster victims in U.S. territories.

Many say they’ve taken part in charitable activities in response to the recent storms, including 55 percent who gave money, clothing or other items to charity, 11 percent who did extra volunteer work, and 9 percent who donated blood or tried to do so.