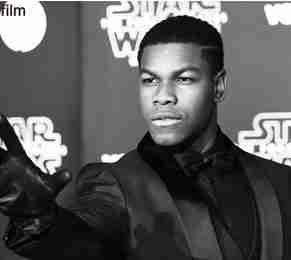 LOS ANGELES — John Boyega may have a lot in common with Finn, the character he plays in “Star Wars: The Last Jedi,” but a trip to a London toy store left the actor floored.

Boyega said one of the most surprising experiences he had while making the film was seeing his own larger-than-life likeness at the Toys “R″ Us store he frequented as a kid.

The actor had gone to find a gift for his newborn nephew when he came face to face with a giant cardboard cutout of himself as Finn.

“There were toys everywhere, and I was just like, ’Wow,’” Boyega said in a recent interview. “I’m on the shelf. It’s strange.”

While he has gotten more accustomed to his place in the Star Wars universe after making his debut as Finn in “The Force Awakens,” both he and his character remain awed by the scope of that world.

A former stormtrooper who escapes the first order to join the resistance, Finn is now emboldened to discover where he fits into the fight, Boyega said.

“It creates a very brave Finn and he’s eager to do anything to find out and prove that this is my position,” said Boyega.

The 25-year-old actor is poised to do the same in Hollywood: his work in Star Wars has led to other high-profile roles, including a part in Kathryn Bigelow’s “Detroit” and in next year’s “Pacific Rim Uprising.”

“I feel like during the filming of ‘The Last Jedi,’ we were kind of living parallels to our characters in a sense,” Boyega said. “Because Finn is now well known in the Star Wars universe, and for me, I’m known within the industry and our planet and whatever. Now he has this reputation and it’s hard for him to keep that up while still figuring himself out because he’s been labeled as a hero.”

Finn’s on-screen heroics in “The Last Jedi” include an epic battle with Captain Phasma (Gwendoline Christie) that took months of training and preparation.

Off-screen, Boyega was a hero to newcomer Kelly Marie Tran, who plays Rose Tico. The two met while she was auditioning for the role, and he has advocated for her ever since.

“He’s so generous in terms of being an actor and really kind of teaching me the ropes because I was new to this,” Tran said. “I truly feel like I couldn’t have had a better partner in this whole experience.”

As for Boyega, he’s had some time to get used to the idea of seeing himself as an action figure. But that was only the beginning of “The Last Jedi” branding.

“I recently went to the grocery store and saw myself on water,” he said. “That’s the biggest it gets for me. Everybody needs water, you know what I mean?”