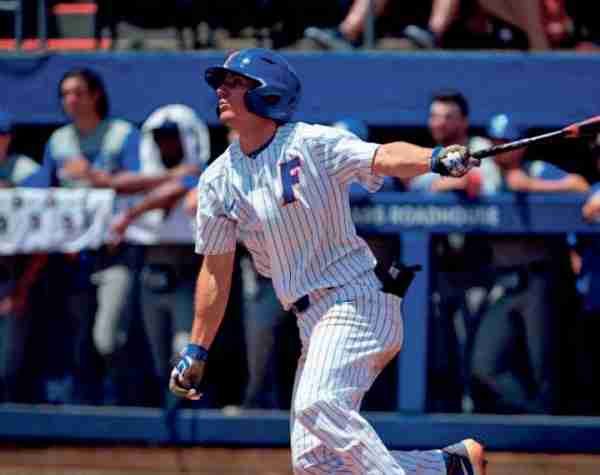 Gainsville, Fla. – Florida is looking like its old self through the first four weeks of the season. Maybe even better.

The top-ranked Gators are off to a program-record 16-0 start and the only unbeaten team in Division I. That’s quite a rebound from last season, when they struggled on the mound, won their fewest games since 2013 and didn’t make the College World Series for the first time since 2014.

The highlight of the first month was the three-game sweep at nationally ranked Miami. But this will be the Gators’ toughest week so far, with Florida State (10-5) visiting Tuesday night and Southeastern Conference play opening Friday at home against Georgia (14-2). FSU is ranked as high as No. 15 and Georgia as high as No. 3.

Florida is averaging 7.7 runs per game and has hit 21 homers with an everyday lineup that includes six freshmen or sophomores. Leadoff man Jud Fabian has five homers and six doubles, Jacob Young is batting .448 and freshman Nathan Hickey has hit four home runs in the last four games.

Florida is the consensus No. 1 team in the major polls. D1Baseball.com ranks Louisville (11-4) and Georgia Nos. 2 and 3. Baseball America has Texas Tech (161) No. 2 followed by Georgia. PHOTOS COURTESY OF THEGAMEHAUS.COM

Florida is the consensus No. 1 team in the major polls. D1Baseball.com ranks Louisville (11-4) and Georgia Nos. 2 and 3. Baseball America has Texas Tech (16-1) No. 2 followed by Georgia. Collegiate Baseball newspaper has Texas Tech and UCLA (132) next in line behind the Gators.

Navy won 2-1 in 11 innings Friday with the help of five walks, two hit batters and two errors. The Midshipmen won when their leadoff man in the 11th reached on a throwing error, moved to second on a sacrifice and scored on another throwing error. There were two other no-hitters last week. Central Arkansas’ Gavin Stone threw one in a 2-0 win over Southeastern Louisiana on Friday. Tyler Strechay, Dillon Meadows, Skylar Gonzalez and Jacob Watters combined for one in an 8-0 win over Kent State on Wednesday.

Alex Williams, Stanford’s Sunday starter and a freshman All-American last year, will miss the rest of the season after having Tommy John surgery. Williams’ surgery was first reported by D1Baseball.com. He had allowed one earned run in 17 2/3 innings. His last outing was March 1.

Bush has a long relationship with O’Brate and OSU and is a baseball aficionado and former co-owner of the Texas Rangers. Bush threw out the first pitch at the CWS in 2001 and again in 2011.

Wedge was a catcher for the Shockers from 1987-89 and played all or parts of four seasons in the major leagues before becoming a coach and manager. Wichita State hired him last May to replace Todd Butler, who was 169-180-1 in six seasons.

The Shockers missed the NCAA Tournament just three times between 1980 and 2009 under Gene Stephenson and won the 1989 national title. They’ve had one winning season since 2015.