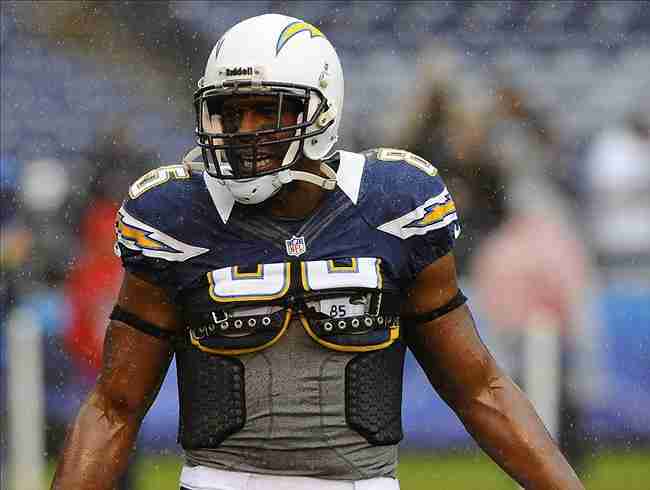 SAN DIEGO (AP) _ Antonio Gates’ squeaky-clean image took a big hit Thursday when the San Diego Chargers’ star tight end was suspended without pay for the first four games of the 2015 season for violating the NFL’s policy on performance-enhancing substances.

The NFL said in a statement that Gates can participate in training camp and exhibition games. He will be able to return to the active roster on Oct. 5, a day after the Chargers’ game against the Cleveland Browns.

One of the NFL’s top tight ends for more than a decade, Gates has had a Hall of Fame-caliber career after joining the Chargers as an undrafted rookie in 2003 following a college basketball career.

He issued a statement through the team apologizing to the Chargers, his coaches, his teammates and the fans.

“In my 12 years in the NFL, I have taken tremendous pride in upholding the integrity of the NFL shield and all that it entails,” Gates said. “I have taken extreme care of my body with a holistic approach and never taken any substance that was illegal or banned by the NFL. In an effort to recover from a long season and although I was unaware at the time, I regret to confirm that I tested positive for a substance that is currently on the NFL banned substance list.”

He said that as an NFL veteran, he should have made sure that what he was taking during his recovery met NFL guidelines. “I have always believed that ignorance is no excuse when it comes to these issues, and I take full responsibility for my actions,” Gates said.

A statement from the Chargers said the team will continue to support Gates and is confident he will be ready to play when he returns in Week 5. “We are tremendously disappointed for our team and our fans as well as Antonio, but no more disappointed than Antonio is with himself,” the statement said.

The suspension comes at a time when Chargers fans are uneasy about the team’s possible move to Los Angeles because it hasn’t gotten a deal it likes for a new stadium in San Diego.

Known for his work ethic and easy smile, Gates became a dominating tight end by using his basketball smarts to get position against defenders, particularly inside the 20 yard line. His hands remain among the surest in the NFL _ even if he only needs to use one of them as he demonstrated with a spectacular diving TD catch against Seattle in Week 2 last season.

Gates was slowed by foot injuries in recent season but worked his way back to prominence the last two years. In 2013 he had a team-high 77 catches, for 872 yards and four touchdowns. Last year he was second with 69 receptions for 821 yards and a team-high 12 touchdowns.

Those 12 touchdown tosses from Philip Rivers gave the duo 72, the most in NFL history between a quarterback and tight end. Also, with 99 career touchdown catches, Gates is second on the all-time list for tight ends behind Tony Gonzalez (111).

Gates joined the Chargers in 2003 as an undrafted rookie after starring in basketball at Kent State, where he helped the Golden Flashes come within one victory of the Final Four in 2002.

The only other time Gates got in trouble was when he was suspended for three games in 2005 by then-general manager A.J. Smith for missing a team-imposed deadline to report to training camp.

Gates sat out the final two exhibition games and the season-opening 28-24 loss to Dallas.