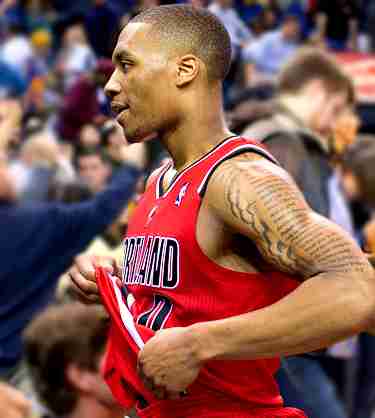 PORTLAND, Ore. (AP) – While Damian Lillard and CJ McCollum didn’t have their usual offensive outburst against Miami, they both got baskets when it mattered.

Lillard scored 19 points and McCollum had 17, including a pair of late baskets, to rally the Portland Trail Blazers to a 99-92 victory over the Heat on Saturday night.

“We just find a way,” Lillard said. “You’ve got to gut one out like that. Find a way when your offense isn’t there. I think that shows great character for our team and it shows growth.”

Hassan Whiteside had 28 points and 16 rebounds for the Heat, who missed out on their first three-game winning streak of the season.

Whiteside’s follow shot put the Heat ahead 91-85, but McCollum made a 3-pointer with 2:57 left and Maurice Harkless’ free throws narrowed the gap to 91-90 with 2:26 remaining.

Wayne Ellington hit a free throw for Miami, but McCollum converted a layup and Harkless banked in a jumper to give Portland a 94-92 lead.

McCollum added a jumper with just under a minute left and Portland held on for the win, outscoring the Heat 14-1 in the final 2:57.

Harkless also scored 17 points for Portland, which has won three of four.

The Heat, at 7-13, have struggled at times following Dwyane Wade’s departure for the Chicago Bulls after 13 seasons in Miami.

“You’d like to go 3-0 but anytime you go positive on a road trip it’s a motivation,” Whiteside said, noting the Heat went 2-1 on the three-game swing. “We can build on this.”

Miami also is grappling with injuries. The team announced before the game that forward Luke Babbitt would not play because of a hip flexor. He joined forward Justise Winslow (wrist), guard Dion Waiters (groin) and Josh Richardson (ankle) on Miami’s injured list and left the Heat with only 10 players available for the game.

Ellington, appearing in his fourth game since returning from a deep thigh bruise, made his first start for the Heat. He finished with 12 points.

Meyers Leonard’s alley-oop dunk from Evan Turner gave the Blazers a 73-68 lead late in the third quarter. The Heat were hurt with 20 seconds left when James Johnson was ejected with a second technical when he got upset about a non-call.

Portland’s recent resurgence comes with a new focus on defense.

“We locked in,” guard Allen Crabbe said. “Defense is really a priority for us now.”

Heat: The team ate on Friday night at 23Hoyt, the Portland restaurant that is partly owned by Miami coach Erik Spoelstra. Spoelstra grew up in Portland, and played for the Portland Pilots. … The Heat had three technical fouls in the first half.

“By the time we get on the plane I’m sure we’ll feel that way, but right now it stings,” he said. “You get up six and we really started to clamp down against a very dynamic, talented, well-schooled and experienced offensive team. They bring a lot at you but our guys were not backing off and making it as tough as possible.”

It was just the third game this season that Portland has kept its opponent under 100 points – demonstrating again the renewed commitment to defense. The Blazers are 3-0 in those games.

Previous post Is Your Dinner Bad for the Environment?