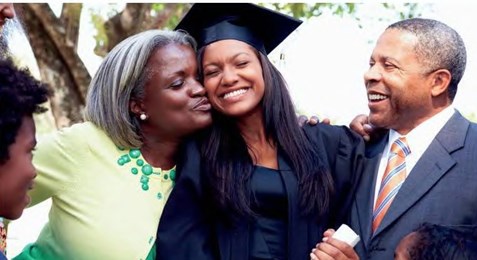 WASHINGTON — The national high school graduation rate reached an alltime high of 84.6 percent in 2017, up from 79 percent in 2010 and 71 percent since 2001. Hispanic, Black, and low-income students have continued to drive this increase with Hispanic students reaching an 80 percent graduation rate in 2017, Black students climbing to a 77.8 percent graduation rate, and lowincome students reaching a 78.3 percent graduation rate. This progress over the last decade and a half means that more than 3.5 million additional students have graduated on-time instead of dropping out. Despite these gains, progress has slowed, signaling the need for a concerted and coordinated response at the national, state, community, and school levels to meet the needs of every young person and close remaining gaps.

“Thanks to sustained and focused efforts by districts, states, and the nation over the past decade and a half, millions of additional students have graduated high school rather than dropping out,” says John Bridgeland, CEO and Founder of Civic. “Yet, students continue to live in two educational nations — with most students in high schools with a graduation rate already at 90 percent, while other students remain trapped in low-performing high schools where the average graduation rate is only 40 percent.”

Connecting the Dots: High School and College Readiness In recognition that high school graduation does not represent a finish line, this year’s Building a Grad Nation report, released today, includes a first-ever analysis of secondary school improvement to assess whether gains in high school graduation rates nationally and by state are accompanied by better preparation for postsecondary education.

Closing Gaps To Reach 90 Percent Graduation Rate Despite steady progress, the nation remains off-pace to reach the 90 percent graduation rate goal, which would re quire graduating an additional 199,466 more students on time and more than doubling the annual graduation rate of gain from since 2011 through 2020. To achieve an equitable path to 90 percent, the majority of these additional graduates would have to be students of color, low-income students, and students with disabilities.

The 2019 Building Grad Nation report provides the first-ever glimpse of homeless students’ graduation rates. Homeless students face multiple barriers to graduation above and beyond poverty alone, and preliminary data suggest that this population may have the lowest graduation rate of any subgroup in the country. The Education Leads Home campaign of Civic, Schoolhouse Connection, and America’s Promise, is engaging schools, states, and the nation in an effort to boost these graduation rates.

“There are more than 1.3 million homeless PreK-12 students—an all-time high. We know that youth experiencing homelessness are 87 percent more likely to drop out of high school,” said Barbara Duffield, Executive Director of SchoolHouse Connection. “And without a high school degree, youth are at much greater risk of experiencing homelessness as young adults. But this tragic outcome can be prevented. States and schools can embrace the strong policies that are already on the books, and adopt best practices to support the social, emotional, and academic needs of homeless students.”

AUTHORS Building a Grad Nation is authored by Matthew Atwell, John Bridgeland, and Erin Ingram of Civic and Bob Balfanz of the Everyone Graduates Center at the Johns Hopkins University School of Education.