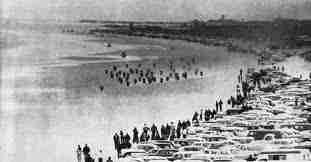 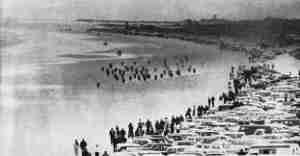 SARASOTA, Fla. (AP) – For some kids, going swimming on a hot summer afternoon once meant going to the cemetery.

The easy part was getting there, walking in the sunshine through the gates of Galilee Cemetery on U.S. 301. At the back edge of the property, over by the train tracks, the young swimmers jumped into an old railroad tank set into the ground. It was filled with cold water, and deep enough for diving.

The creepy part came when the sun went down and they’d make the long, cold walk back out through the gravesites, shivering.

As for that water tank, meant for servicing trains, it wasn’t exactly safe. Even in the 1940s, it was nobody’s idea of a great place for children.

Still, it was all they had.

Back then, in the days of segregation, black residents risked trouble almost any time they stepped outside the Newtown community. There were rules against walking downtown after dark, using certain water fountains, or trying on shoes in a Main Street shop.

And Newtown had no beaches.

Only nine miles away, others enjoyed the best beach in America, as Siesta Key has sometimes been called. The white sands of Lido were even closer. But for the kids growing up in Newtown 60 years ago, those pretty places were off-limits.

Black people weren’t allowed on the beach. There were no signs posted, and no such laws on the books. It was simply “understood,” say people who remember those times. Rising calls for desegregation were met with resistance from white residents and hand-wringing among local officials.

On Oct. 3, 1955, about 100 black residents challenged the old order by piling into cars, driving to Lido and wading in the water. The simple act drew the attention of authorities and opened up an early front in the fight for civil rights here, years before the better-known victories of the 1960s. After the beaches were conquered came schools, businesses and political offices.

For some of those early pioneers, the beach would forever remain more a battleground than a place for fun. The caravans to Lido Key continued for years and generated tense moments. Public officials never openly tried to stop them, but at least early on there was some not-so-subtle harassment.

“It was a time of challenges,” said Ed James II, a community activist who was involved in the caravans as a high school student. “They didn’t want to do anything to hurt the tourist trade. But that didn’t mean they weren’t malicious and ironclad in what they would do, like other Southern towns.”

When black swimmers broke the unwritten rules at Lido Beach, they made front-page news. Some whites were outraged. Police came out to monitor the scene, sometimes interfering with the visitors and sometimes defending them.

The papers of the time called it a civic crisis, and described Sarasota as a “powder keg.”

James had never been to the beach until his grandparents brought him to Lido Key as part of the NAACP’s beach caravans.

He was in high school when he made the first trip, riding in the back of his grandparents’ car as they joined the run to Lido Beach. When they stopped, he followed his family out onto the sand. But even then, as he recalled it later, the beautiful scenery that built Sarasota didn’t make that much of an impression on him.

“The beach wasn’t on my mind,” James said. “That’s not how we were trained. It was a job.”

James comes from a family of community leaders and activists _ it was his grandmother, Mary Emma Jones, who first started lobbying Sarasota County for beach access for black residents. Decades later, he is still not much of a beach enthusiast, describing the episode as a matter of principle.

Al Abrams rode with some high school classmates in a caravan of some 10 cars that was stopped by a police roadblock on its way across the bridge to Lido Key.

“A vehicle inspection,” they called it, as Abrams remembered. The police checked every vehicle but apparently found no problems sufficient to turn the cars back.

“They couldn’t arrest us. But they did everything they could to keep us out,” Abrams said.

There were other incidents. Some teenagers from Newtown made their own, less-organized forays to the beach and were pelted with bricks and rocks. Cars parked at Lido Beach during NAACP-sponsored outings sometimes had flat tires by the time the swimmers came out of the water.

James remembers NAACP leader John Henry Rivers sternly lecturing a group of white teenagers he found setting glass bottles behind the rear tires of the cars. “He said, `If you don’t go pick up every one of those bottles, I will kick your _ ‘ ” James recalled, leaving out the harsh language. The teenagers complained to a police officer, who sided with Rivers.

It was NAACP president Neil Humphrey Sr. who organized the caravans. Humphreys, a successful Newtown businessman, possessed the necessary financial independence to challenge the establishment. Though relatively short of stature, he was respected, James said. “A real man. He meant what he said and said what he meant.”

And when it came to actively defending the caravans, Rivers was crucial, James said. “He would sometimes demonstrate what he meant, if you didn’t understand it.”

The NAACP’s demonstrations inflamed racial tensions at a time when city and county officials were seriously debating the establishment of a “Negro beach.”

Those debates, covered extensively in the Herald-Tribune, dragged on for years. A county committee proposed segregated beaches in Venice, on Siesta Key, and on Longboat Key. But in each case the proposals were dropped when white neighbors protested, predicting declining home values and rising crime.

The city of Sarasota countered the Lido Beach caravans by strategically placing “No Parking” signs. City officials closed Coolidge Park, the site of many of the caravan missions, ostensibly over safety concerns.

If the beach issue was a matter of principle to some, it was personal to others. The same Newtown kids who grew up jumping into the old water tank behind Galillee Cemetery branched out as they grew older, intent on finding more and better places to swim.

Until things changed, they made do with nooks and crannies along the coast that were either out of sight or too unpleasant for most others.

Some boys from Newtown used to ride their bikes to the waterfront downtown to dive off of the raised wooden pier until city workers or other adults chased them away.

On Longboat Key, gaps in the shoreline between new homes gave access to the water. Word of the best spots spread from domestic workers employed on the key to Newtown schoolteachers taking children on field trips. They found no sandy beaches there _ just undeveloped stretches offering temporary access before neighbors complained.

Jetson Grimes, now a Newtown leader and proprietor of Jetson’s Creative Trend barber shop and salon, visited them all in his youth. Though he has some fond memories, he now dismisses those places as poor substitutes when compared with the miles of fine beaches that the area had to offer.

One of the worst spots was the north side of City Island, where, as a teenager, Grimes served as a lifeguard in a summer youth program for Newtown children. The kids were just happy to swim, as he recalls, but he knew better. There was no sand on the rocky shore, but plenty of jellyfish and a strong current that worried him as he watched to make sure no one was carried off.

Similarly, few in Newtown have anything good to say about a similar “beach” in Venice that was in those days unofficially set aside for black visitors. “You wouldn’t send your worst enemy there,” Grimes said.

While local officials continued to debate the location of a “Negro beach,” pressure to do something increased with each passing year. The author McKinlay Kantor lived in Sarasota at the time and shamed public officials in a 1956 letter to the editor in the Herald-Tribune. The scathingly sarcastic piece by the author of “Andersonville” skewered the community’s prejudices and excuses, telling the story of a black World War II veteran who died in the war but whose ghost was barred from the beach. Kantor threatened to write something for a national magazine if white residents kept dragging their feet.

In 1957, the county built a new swimming pool in Newtown, hoping to appease residents. The day it opened, another beach caravan set out for Lido Key.

“That was the `Great Compromise,’ ” James said sarcastically. There was no overt public victory in this struggle for years, though the city later commemorated the beach caravans with a historic sign near the Lido Beach pool. But eventually, as James remembers it, “the city got religion.” Word spread through the community that Sarasota city officials, in meetings with NAACP leaders, had quietly agreed to give up efforts to keep black people from using the beach.

The effect of the agreement wasn’t immediately visible. There was no sign taken down from the beach, and black people from Newtown didn’t suddenly set out for Lido Key in great numbers. But over time, a new understanding settled in: The beach was open to all.

Today, Ed James II still doesn’t go very often, but his youngest son, Ed James III, does. It’s been a part of his life as long as he can remember, since his elementary school days on Siesta Key.

“I think it’s something that a lot of Sarasotans take for granted,” Ed James III said. Now working in politics in Tallahassee, he still brings friends back to take them wakeboarding and paddleboarding. He tells his father what waterfront restaurants to visit for seafood, though the elder James doesn’t always remember to do so.

James III is mindful that Newtown had to fight for what he now enjoys. And in his view, those old patterns haven’t disappeared completely. “The beaches are still sort of segregated,” he said. On some beaches, one still sees mostly white visitors and tourists. More young black people, and other minorities, tend to prefer South Lido Beach.

But the Sunday-night drum circles show the beach at its best, he said. There, he finds a diverse crowd, “old, young, white and black,” that once wasn’t possible.

Next post OBAMACARE HIT BY RULING, BUT SUBSIDIES TO CONTINUE