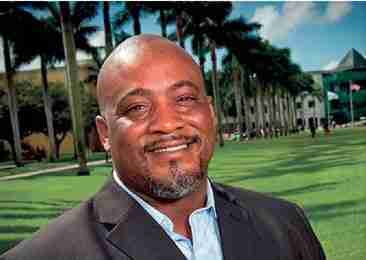 ORLANDO, Fla – Desmond Mead warned the over one million Floridians directly impacted by the passage of Amendment 4 to be patient and not rush out to their Departments of Elections expecting to become registered voters.

“There’s a process. After election, there has to be an official verification. After the official verified, this certified amendment would have to be written into the constitution. We’re looking at implementation in January,” Mead said via a Facebook Live broadcast the day after Florida voters agreed that Floridians with felony convictions should have their voting rights restored after they fully complete their sentences, including parole or probation. (Convicted murderers and sex offenders are barred from the immediate restoration of voting rights.)

What he does want returning citizens to do right away is to go to www.floridarrc.org, “Find a chapter that’s near where you live.

Sign up to be a part of that chapter.”

Mead said he avoided making any Facebook posts on Election Day because “I was nervous.”

While he didn’t post, he did read the overwhelmingly supportive messages from others. He said he and Florida Rights Restoration Coalition (FRRC) board member, Neil Volz traveled from Orlando to Miami to meet with foreign press members before returning to central Florida to wait for the election figures to roll in.

“As I was reading your posts, I started crying. Thinking about how far we have come together,” said Mead, executive director of the FRRC. His poignant moment was met with a bit of comic relief when a little boy on the plane spotted his tears.

Mead said the kid told his mother, “Mommy the big black guy is crying, there must be something wrong with the plane.”

For the past seven years, felons have had to wait five years after completing their sentence to even apply to have their voting rights restored. The process then required felons to appeal to the state clemency board for a hearing. With the board meeting only four times a year, the process can take more than 10 years to complete. The state’s draconian laws meant Florida once barred more former felons than any other state.

At least 60 percent of voters had to approve it for Amendment 4 to become law and the measure was approved by 65 percent of Florida’s voters. Approval of the amendment lifts Florida from its deleterious status as the state with the most people permanently barred from voting.

To put the victory into perspective, Mead said, “Over five million voters voted to restore our rights.” He added, “Guess what?

You ready for this? More people voted for us than any other candidate. And all five million of those votes we look at as votes of love. People who had family members and friends and believed in forgiveness, believed in second chances.”

The road to getting the amendment on the ballot was facilitated by Floridians for Fair Democracy, through which Mead and others successfully gathered more than 799,000 certified signatures a week before the deadline to reach the required total of about 766,000.

Mead is the poster child for what a second chance can mean. The formerly homeless returning citizen overcame many obstacles to eventually become the current state director for Florida Live Free Campaign, chair of Floridians for a Fair Democracy, chair of the Florida Coalition on Black Civic Participation’s Black Men’s Roundtable, and a graduate of Florida International University College of Law.

Additionally, Mead is also engaged in a national campaign to reduce mass incarceration, reduce gun violence in urban communities, and re-enfranchise the over five million returning citizens nationally who are prevented from voting.

An exhausted Mead said he was operating on one hour of sleep because following the passage of the amendment, “We threw down. We partied. Last night was off the chain.”

He thanked the volunteers and returning citizens who worked to educate Floridians about the amendment.

“You all made this happen. You all made it possible that other people started taking our campaign seriously. Thank you from the bottom of my heart.”

He also urged returning citizens to embrace the enormity of the amendment’s outcome.

“We are now going to be able to register to vote. Let us not take this for granted. Let us make sure we exercise this ability.”

Previous post Yoga shooter appeared to have made misogynistic videos