ANTI-VIOLENCE YOUTH GUNNED DOWN, BUT NOT SILENCED 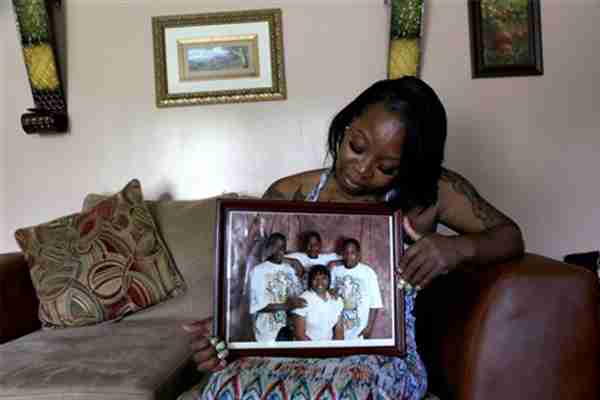 He had just three minutes, so he got right to the point: Eleven days earlier, on May 1, Jordan’s best friend, Shaniqua Simmons, and her boyfriend were gunned down in an apartment at the former Cambridge Arms. It was the second double homicide at the 694-unit complex since January, and Jordan said it was time for the city to close it down.

“I don’t feel like, as a resident in an apartment complex, you should be paying basically for your grave site,” he said. “You shouldn’t be paying to be killed or murdered in your own house.”

City officials had worked with the owners to increase security, to install more cameras, even to change the name to Barrington Place. But to Jordan, that wasn’t enough.

“Changing the name is not going to change the violence at all,” he said politely, but firmly. “You could still put lipstick on a pig, and it’s going to be a pig at the end of the day.”

Having said what he was there to say, he stepped away from the microphone. A council member thanked him for his remarks.

Barely a month later, the aspiring fashion designer was dead.

Cut down in the crossfire between two rival gangs during an early morning house party, he was the victim of the city’s ninth homicide of 2014.

As home to one of the Army’s largest installations, Fayetteville is no stranger to death. But the loss of this promising, outspoken young man has shaken this tough military town to its core – and caused it to look deep within itself.

“Ravon wasn’t a street kid, a hoodlum, anything like that,” said Shauna Hopkins, who mentored Ravon through a program for at-risk teens. “Some kids, you kind of see things coming. But this one? This blind-sided me.”

“Fayettenam,” as this city of 205,000 along the Cape Fear River is sometimes called, has something of a split personality.

Anchored by the old market, beneath whose Moorish arches slaves were once traded, the downtown boasts some well-preserved 18th and 19th architecture. Beyond the city center, cul-de-sac subdivisions and manicured golf courses stretch out into surrounding Cumberland County.

But along Bragg Boulevard and other major thoroughfares, pawn shops, strip clubs and tattoo parlors service the transient population at the sprawling Fort Bragg Army installation.

To be sure, Fayetteville is no Detroit, New Orleans or Chicago. But it has more than its fair share of violent crime.

In 2012, the city’s homicide rate was nearly 11 per 100,000 residents – more than twice the national rate and considerably above that of similarly sized cities, according to the FBI Uniform Crime Reporting program. In reporting its ongoing series, “Seeking Safety,” The Fayetteville Observer discovered an unnerving statistic: Between 2010 and 2013, police records show that 2,603 guns were reported stolen in the city – an average of about two a day.

By all accounts, that was not Ravon Jordan’s world.

The youngest of three boys, Ravon – he pronounced it RAY-von – was more interested in his stepdad’s airbrush gun than the kinds gang-bangers use. One day, his mother returned from some errands to find the walls around his bed festooned with planets and stars, his name painted in bold cursive above his headboard.

“I was very shocked when I came in, because it was without permission,” she said with a sigh as she stood beside his empty bed on one recent afternoon. “But that’s Ravon.”

The closest Ravon came to trouble was when, at 15, he was accused of shoplifting a rubber bracelet. His mother says it was a misunderstanding, and no charges were filed.

By then, Ravon had already joined older brothers Rotreil and Rometreius at Find-A-Friend, run by the Fayetteville Urban Ministry. Hopkins, the program coordinator, said Ravon immediately emerged as a leader. She remembered one instance when the children were teasing a girl about her weight. Before she could step in, Ravon was on it.

“It’s not funny,” she recalled him saying. “We’re all here for a reason and we’re all here to support each other and we’re supposed to be a family. So we’re not going to do that.”

His favorite movie growing up was “Bambi,” and he was always quoting Thumper the rabbit: “If you can’t say something nice, don’t say nothing at all.”

At Westover High School, Ravon ran track and was in the band chorus. His junior year, he led the school’s new percussive dance team, the Powerade Soul Steppers. But as much as he liked to dance, his passion was design. Felicia Jordan says Ravon was always asking to go shopping, but not at the mall.

“He would say, `Ma, let’s go to the Goodwill,'” she recalled, smiling.

He would take the secondhand clothes and make them new. Before long, friends and family were begging for a pair of his slashed jeans or a tie-dyed shirt. He’d take no money for his work.

Generally, nothing got him down. Simmons’ death changed that. Friends say Ravon blamed himself. Perhaps if he’d been in town, he might have been with her, and she’d still be alive.

A friend asked Ravon to go to Charlotte on June 21, says Simmons’ sister, Anita. He planned to go, but she said he changed his mind, “Because he said that last time he left his friends, that he came back and his friend was murdered.”

That evening, Ravon and another friend attended an anti-violence rally in town. Afterward, the two headed to a house party in the city’s Southgate section.

Shortly after 1 a.m., an argument broke out in front of the home. The friends decided to go see what was happening.

Anita Simmons also was there. She said she and Ravon were standing beside a truck in the driveway when shots rang out. When she looked up, Ravon was on his back, his eyes closed.

When Felicia Jordan entered the emergency room at Cape Fear Valley Medical Center, it was packed with her son’s friends.

When she saw Ravon, she didn’t recognize him. His head was covered in bandages, his face horribly swollen.

As the machines keeping him alive pumped and whirred, tears leaked from Ravon’s eyes. She dabbed them with tissues.

Later that morning, doctors declared Ravon brain dead. The following day, before taking him away to harvest his organs for transplant, nurses helped Felicia Jordan make a plaster cast of Ravon’s right hand. She gave him a kiss and whispered, “I love you,” in his ear.

It wasn’t until after his death that Felicia Jordan learned of her son’s appearance before the city council. She was at the nail salon, getting a manicure in preparation for his funeral, when a man approached.

“No,” the stranger said. “I’m talking about that video he did.”

Sensing her confusion, he pulled out his phone and showed her Ravon’s speech on Youtube. Tears streamed down Jordan’s face.

“I knew he was brave,” she said, her chest puffing up. “But I didn’t think he was THAT brave.”

At the scene of the shooting, investigators found more than 70 spent casings from at least seven distinct weapons scattered on the ground.

Shortly afterward, police released footage from a convenience store surveillance camera showing several agitated men gathered around a car. So far, there has been no word of arrests.

Weeks later, hundreds came together on the steps of the Cumberland County Courthouse to mourn Ravon and other victims of gun violence.

As a council member, Mitch Colvin had listened to Ravon’s plea. As a funeral director, he was called upon to “plan his homegoing.”

“This has got to stop,” he thundered as members of the crowd waved their hands and nodded their heads. “The young, black male in this city is an endangered species.”

Police Chief Harold Medlock told the crowd that he and his officers were “weary.”

“We know that sons and daughters, friends, brothers and sisters are carrying guns,” he said. “But it’s not our business. … Folks, I’m here to tell you it is our business, and that blood is on the hands of everyone in our city if we’re not holding our youth accountable for their actions before tragedy occurs.”

Felicia Jordan was there, wearing a pair of her son’s shredded jeans. She begged the young people in the audience to stay away from “kickbacks” like the one where Ravon was shot. She told them to come to her house instead, and even offered to help them apply to school.

In fact, the day he died, Ravon was scheduled to come by Shauna Hopkins’ office to start work on his college application. He wanted to be a Fayetteville State University Bronco, just like her.

“I’ve served a lot of children, and I’ve had a lot of success stories – and some heartbreaks,” she said, shaking her head. “This one here is one that has really just torn me up.”