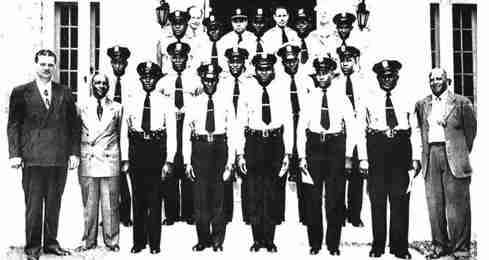 During the Jim Crow era, black officers in Miami were forced to patrol with no real headquarters until the Black Police Precinct was designed in 1950.

MIAMI – Thanks to a generous contribution from the Miami Community Police Benevolent Association, the Black Police Precinct & Courthouse Museum will honor frontiersmen and women with the first ever First Five Pioneer Award at 4 p.m. on Saturday, July 22 at the museum, located at 480 NW 11 Street in Miami.

Each honoree will be recognized for their contribution to the inclusion and advancement of African American officers and support staff in the City of Miami Police Department that started with a unit of five African American peace officers affectionately known as the “First Five.”

Because of segregation, the officers could not operate out of the main Miami Police Station. So, they policed by walking and riding bicycles.

There are even stories of arrested prisoners being taken to jail on bicycle handlebars or by walking and even hailing rides from citizens driving by. They had no cars, no radio contact and, most of all, no headquarters.

In 1950, renowned Miami architect, Walter G. DeGarmo, designed the first and only Black Precinct and Courthouse in the nation just in time to house a growing staff that included many of the honorees.

The museum was refurbished and restored into a designated historic museum that acquires, preserves, displays and promotes collections that relate to the struggles and accomplishments of City of Miami black police officers in the 1940s, 50s and 60s.

Then, and now, the building is the only one of it’s kind in the nation.

This small, intimate event will be the first of many. There will be entertainment, food and festivities. Family and friends are invited to attend.

For more information, go to historicalblackprecinct.org